The woman with her nose in a book shop 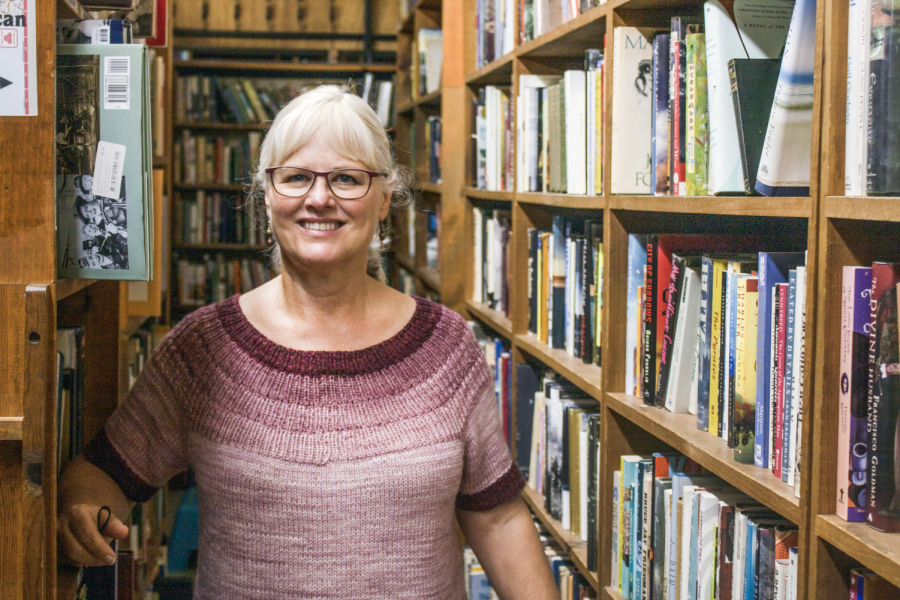 Susan Elmore, co-owner of Jane Addam’s Book Shop, runs the store with her family after buying the building on a whim 11 years ago.

Susan Elmore didn’t know she was going to end up buying an entire bookstore one fine evening, 11 years ago, when she went out for drinks with her husband.

They were seated opposite a bookstore and at what is now Watson’s Shack & Rail when the thought occurred to her.

She was originally a costume design major at the University of Illinois at Urbana-Champaign and then became a nurse at Carle Foundation Hospital. Now she is also the co-owner of Jane Addam’s Book Shop, located in downtown Champaign.

The bookstore has been in Champaign for about 36 years now, the previous owner was Flora Faraci.

“She had had it for 25 years,” Elmore said. “She had started it even before that, with a friend up in Chicago. Which was a feminist bookstore, which is why the name Jane Addam’s Book Shop.”

Faraci opened the Jane Addam’s bookstore when her husband moved to Champaign to start his restaurant, Great Pasta. At the time, the bookstore was a craft store with the top floors serving as apartments. Since then, the space has also been a photography studio.

When the Elmore’s spoke to Faraci’s son about buying the 100-year old building, it wasn’t originally for sale. A couple years later, it was put on the market and the Elmore’s were offered the building under one condition — that it remain a bookstore.

Linda Percil, has been an employee at the bookstore for over 11 years. She described her love for the job, recommending books to customers and sorting through books as some of her favorite things to do.

That being said, Susan Elmore didn’t have what can be considered the ‘expected’ career path of your regular bookstore connoisseur. Initially, her husband and she had come to Champaign-Urbana to attend the University.

Although she initially started out interested in medicine, she changed her mind to costume design. After graduation she picked up a job at Dallas & Co., a local costume and magic shop in town.

“Back then they made their own costumes, and the owners were husband and wife,” Elmore said. “He was a magician, so Andy Dallas was kind of a famous magician around here. So, I would make costumes for ‘em.”

During the same time, her husband was spending an extra semester during the summer at the University. He also worked at Dallas & Co. to help organize their catalogues.

“I was making gorilla costumes, and he’s a big guy,” Elmore said. “Dead summer, really hot. I ask him, I’m like you know batted my blue eyes and had blonde hair. I said, could you try on this gorilla costume in the dead heat because there was no AC. He did and that is how we met!”

Elmore said her husband has not only been her partner in life, but also her partner in owning the bookstore. Both working part time they have really been able to work as a team over the years and with the help of their family, kept the bookstore alive.