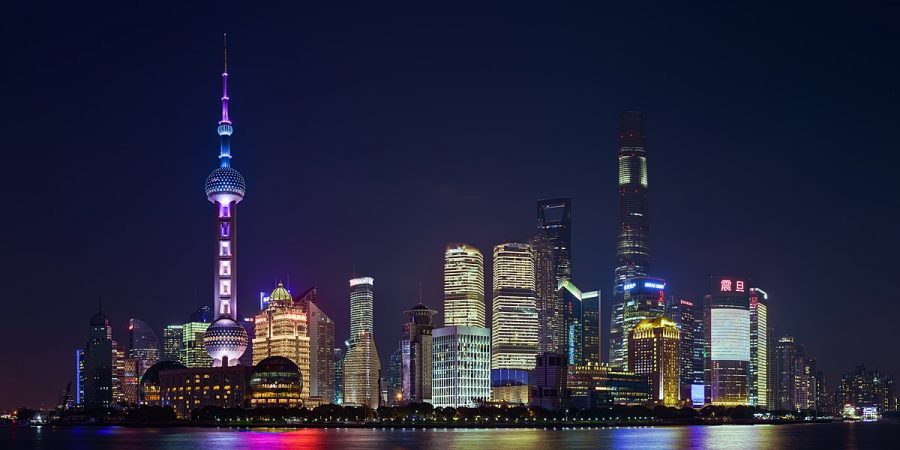 Shanghai’s skyline glows brightly in the night on Nov. 20, 2017. Some international students like Henry Pang have been unable to return to their home countries during the coronavirus pandemic.

On March 11, the University informed the campus community that it would be suspending face-to-face instruction indefinitely. By the end of that week, many of us had left campus without any idea of when we would be returning, some of us even packing up our living spaces for good.

Shyam Hari, sophomore in LAS and Engineering, said he had planned to spend his spring break in Minneapolis, visiting his cousin. During his trip, Hari received an email communication from University Housing dictating the need to remove his belongings from his dorm at FAR by March 28. He was forced to return to campus prematurely on March 16, set to fly home on March 17. In the meantime, the United Arab Emirates, his home country, suspended all visas issued in the two weeks prior. This meant Hari couldn’t return home.

“If I had flown out just 24 hours prior, I would have made it there,” he said.

At the same time, Hari acknowledged the fact that returning home would have been slightly more stressful, and he would have run the risk of being quarantined by the government before being allowed to return to his family.

Henry Pang, freshman in LAS, said this was one of the reasons he, too, did not return home to China.

“During the process of going home, anyone could get infected,” Pang said. “When you get back to China, people are quarantined for 14 days in a hotel before being allowed to go home. With online classes, you also have to consider the time difference.”

Satej Shah, junior in Business, was supposed to be studying abroad in Vienna, Austria, this semester. On the morning of March 12, Shah woke up to realize his abroad program had been canceled, President Trump had issued an order to soon cease travel from Europe and Shah’s parents had booked him a flight home overnight. He was expected to leave the very next day.

“I’ve had to completely change my schedule, expectations and work style within a span of a couple days,” Shah said. “My initial plan was to go to Italy tomorrow for a trip, but I’m sitting at home doing the same thing every day. It’s been hard adjusting back to a very high school-like life.”

Regarding online classes, Pang and Hari both said it is easy to get distracted during lecture.

“Online classes are not ideal,” Hari said. “Sixty percent of what I usually need to learn from a class comes from actually sitting in lecture. There are office hours, but these are often crowded and not the same.”

Aside from schoolwork, Pang, Hari and Shah all said there isn’t much to do. Pang has tried to stay occupied by learning new skills such as cooking and playing the harmonica. Shah said he has been trying to virtually work on projects and stay involved in a nonprofit organization he has been a part of to keep busy. Students seem to be re-engaging in some of their hobbies as a coping mechanism, and this could be one potential positive outcome of this complicated situation right now.

“Personally, I think a positive that can come from this is being able to cope with and adjust to everything that’s going on,” Shah said. “That’s a skill and experience of its own. The other positive I’ve considered is understanding and leveraging the online learning format in a professional world. I think that will make a big difference across several different sectors and in a lot of different countries around the world. There could be an economic advantage there.”

One thing we know for sure is that many students will not be returning to campus for some time. On April 2, the University communicated its directive to continue remote learning through the summer semester. This left a lot of things up in the air for students who are concerned about interruptions to their four-year plans such as canceled internships and research programs.

Hari brought up a hypothetical situation that could affect all students even months down the line. He explained how U.S. embassies are not currently taking any visa appointments, and it is unclear when they will start to. It takes about two to three months for the visa process to be completed, and Hari suggested the possibility of international students of the class of 2024 not getting their visas approved possibly until September, rendering them unable to attend the University in person. This could present the question of whether or not the University would continue online instruction through the beginning of the fall semester to accommodate these students.

Potential outcomes like this make it all the more important to follow safety guidelines and maintain social distancing right now.

“A lot of young people think this is just an exaggerated thing, like a worse flu, but from the numbers, you can see that it’s not,” Pang said. “Everyone must hold themselves accountable to protect themselves and those around them.”

I completely agree with Pang — this is serious. No one asked for this. No one’s been through this before. But there’s strength in numbers, and right now we’re all in this together. Stay safe!