As University administration salary rises, so does tuition

An explanatory look at rising tuition, administrative salaries and how public universities are funded 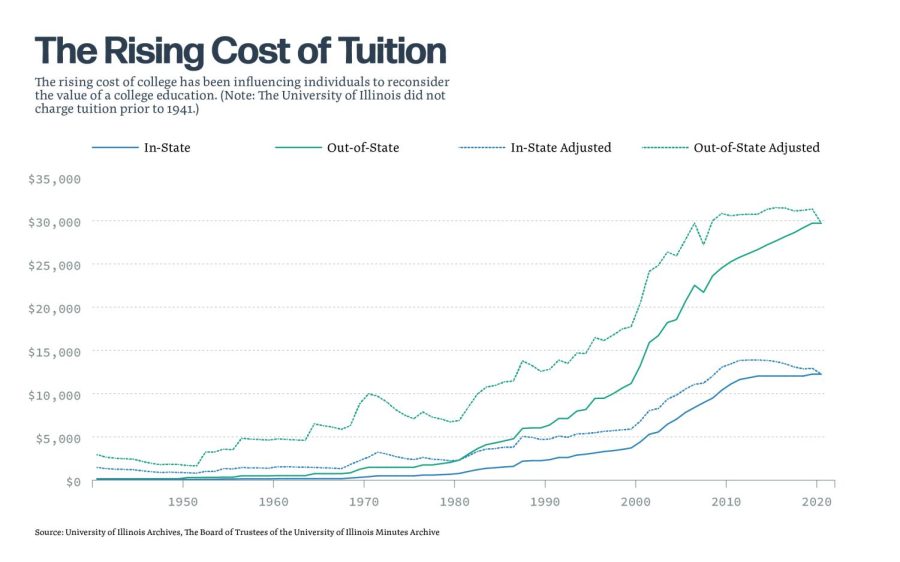 When Jack Peltason took office as the first chancellor of the University of Illinois at Urbana-Champaign in 1967, he took home a salary of $34,000 per year. Adjusted for inflation, Peltason’s salary roughly equates to $279,237.

Today, Chancellor Robert Jones, now five years into his tenure, takes home $695,476 per year. Jones holds two positions within the University System, acting as the chancellor of the Urbana-Champaign campus and the vice president of the UI System as a whole, contributing to his increase in salary.

Note: All tuition figures presented in this article have been accessed from the University Archive and have been rounded to the nearest dollar. For consistency, all figures are taken from the undergraduate tuition base rate for a year of education, as the exact figure varies from college to college. Additionally, from 1981 to 1994, the University charged two different rates, one for freshmen and sophomores and another for juniors and seniors. For consistency, figures presented for these years are an average between the two rates.

Salary figures have been sourced from the UI Gray Book archive, an archive of University employee salaries. Figures adjusted for inflation have been calculated using the U.S. Bureau of Labor Statistics’ Inflation Calculator and are rounded to the nearest dollar.

Due to the many responsibilities and prestige associated with the office, university chancellors often rank toward the top of their institution’s pay ranking.

The University of Illinois at Urbana-Champaign appointed their first chancellor, Peltason, in 1967. Since then, the University has seen 12 different chancellors hold the office for 13 different terms — Morton Weir held the position twice, once in 1977, and again from 1987–1993.

This trend took a hit with the financial crisis of 2008, with chancellors in the following years experiencing smaller salary increases than their predecessors. In 2010, Chancellor Robert Easter’s salary was $355,000 — $449,764 when adjusted for inflation, less buying power than the position’s salary five years earlier.

Current University Chancellor Jones took office in 2016. Since his first year in office, Jones has concurrently held the chancellorship in addition to the vice presidency of the UI System. Due to holding two positions, Jones’s salary is much higher than his predecessors.

During his first full year in office in 2017, Jones made $649,000. In the University’s Gray Book — the document containing University employee salary — Jones’ salary is split on two lines, with one item listed as $424,000 and the other as $225,000. Both items are listed as “Chance UC & V Pres UI,” however, keeping in line with previous chancellor’s salaries, it can be reasonably assumed that the $424,000 is for his role as chancellor, with the $225,000 is for his role as UI System vice president.

Currently, Jones makes $695,476 per year split among his two positions. In line with current trends, $454,363 of that income derives from his position as chancellor.

As a public land-grant institution, the University of Illinois at Urbana-Champaign is partly funded by Illinois taxpayers — hence the lower cost of tuition for in-state students. However, the portion of the University’s budget covered by state funds is less than one-third.

Despite being a public university, the University of Illinois only receives 30% of its funding from the Illinois government. Of the state funding, 21% comes from “state payments on behalf” — restricted funds from the state used explicitly for the purpose of paying employees’ salaries and health care coverage. The remaining 9% comes from state appropriations — unrestricted funds usually used to pay employees’ salaries and cover operating expenses such as utilities and maintenance.

The remaining 16% is covered by miscellaneous earnings from sources such as the Chicago campus’s university hospital and various medical services plans.

The University of Illinois System also operates a $2.4 billion endowment that contributes to the University’s revenue.

Endowments are aggregations of assets — usually donated funds — invested in various sources, such as stocks, on the University’s behalf to financially support a University’s mission in the long term. The UI System’s $2.4 billion endowment is the 17th largest public university endowment in the country.

Although it’s hard to imagine higher education without the impact of tuition costs today, the University of Illinois didn’t charge tuition from 1870 to 1940. Housing and student fees were all matriculated students had to budget, and it was succinctly feasible for students to cover these costs with a simple part-time job.

Students saw small, periodical increases in their tuition throughout the 50s and 60s, and it wasn’t until 1969 that in-state tuition broke $200, costing $246. Out- of-state tuition increased at a steeper rate during this time frame, not atypical for a public university. In 1969, out-of-state tuition cost $852.

The exponential increase in tuition charges has been outpacing the rate of inflation ever since the 1990s. For periods of time when the University kept tuition at a constant rate, the value of tuition would decrease due to the inflation rate of the U.S economy. For example, the $80 charged for in-state tuition in 1941 has a buying power of $1,473 today. The University kept the in-state tuition rate fixed at $80 until 1952; by then, $80 in 1952 had the buying power of $822 today.

While increases in the price of tuition are expected to keep up with the natural rate of inflation, the cost of attending college has been rising at an average of twice the rate of inflation according to Forbes magazine.

While today there is an intrinsic link between tuition and public education, that was not always the prevailing thought. In 1973, University President John E. Corbally sent a letter to the University Board of Trustees weighing in on an internal debate over the place of tuition in public higher education and a proposed tuition increase for the 1974 fiscal year.

“In my view, the theory and philosophy of public higher education support the concept that no tuition should be charged (to) those who attend public universities,” Corbally wrote in his letter. “This concept, however, has eroded under the pressures of financial needs and the inability and/or unwillingness of society to provide financial support to meet those needs. Tuition at public universities is, thus, a concept which has been born of necessity rather than that of theory.”

The University Board of Trustees decided not to raise tuition that year. In 1974, tuition for in-state students cost $496 — $2,721 adjusted for inflation. Comparing the adjusted figure to today’s tuition, in-state tuition cost over $9,500 less in 1974 than it does today.