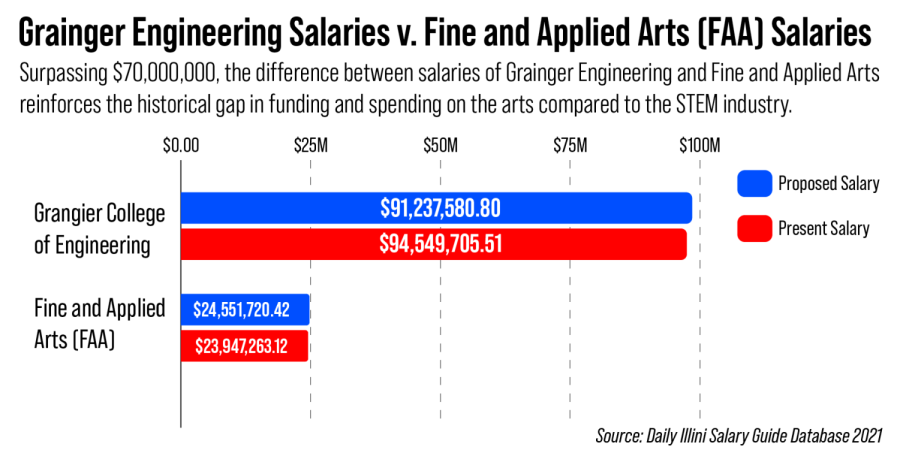 It’s no secret that fine arts programs in schools have been continuously underfunded compared to athletic and STEM-related programs. In 2016, for example, Kentucky Governor Matt Belvin suggested that students majoring in arts and humanities should not receive state funding for their education, saying that majors in arts and humanities aren’t “things people want.” He instead urged public universities to produce more STEM students, which might get more state funding based on his proposal. Even other countries like England are discussing and establishing cuts in funding to arts courses.

Part of the rationale of the budget cuts and opposition to arts education in schools is that arts classes like music, dance and art aren’t as important as classes like math and science. Another part is that arts departments don’t produce a lot of successful graduates, if your definition of success is based solely on your monetary gains.

Though these reasons may be, for the most part, objective, data does show that college graduates with arts and humanities degrees typically earn less than graduates with other degrees. We also see this in the salaries of University of Illinois employees in Grainger Engineering when comparing their salaries to employees in the College of Fine and Applied Arts, which includes architecture, art and design, dance, sustainable design, landscape architecture, music, theater and urban and regional planning.

Many politicians, like Gov. Belvin, have suggested this kind of data (showing that those in STEM fields make more than those in arts fields) supports the decision to cut funding in arts programs in order to better support STEM programs.

But some say that there are many skills employers look for that arts classes promote and foster. Russ Deaton, interim executive director of Tennessee’s Higher Education Commission, said in a 2016 New York Times article by Patricia Cohen,

technical skills, but the soft skills as well — the ability to think creatively, to work in

groups, things that you traditionally get in the liberal arts. It’s not as

simple as STEM is valued and worthy of incentives and everything else is not.”

Not only does an art-focused education make a student more appealing for employers, it is also found that student’s lives are overall impacted for the better. Assistant professors Brian Krisida from the University of Missouri and Daniel H. Bowen from Texas A&M University conducted a trial study with the purpose of encouraging academic communities to further support the arts.

In an article written by Krisida and Bowen, their study focuses on two academic years in Houston’s Arts Access Initiative at 42 elementary and middle schools. The results were measured through student demographics, test scores, disciplinary records and survey responses. They found that students tend to enjoy school work more when it is artistically based than those with less art in their curriculum.

“There are strong reasons to suspect that engagement in arts education can improve school climate, empower students with a sense of purpose and ownership and enhance mutual respect for their teachers and peers,” Krisida and Bowen said.

This evidence can suggest that increasing funding in the arts is beneficial to not only the future of students but also their present enjoyment of learning. The future of arts education is unknown, but the data of University employees’ salaries as well as other research suggests that should universities need to cut funding, the arts programs may be the first on the chopping block.