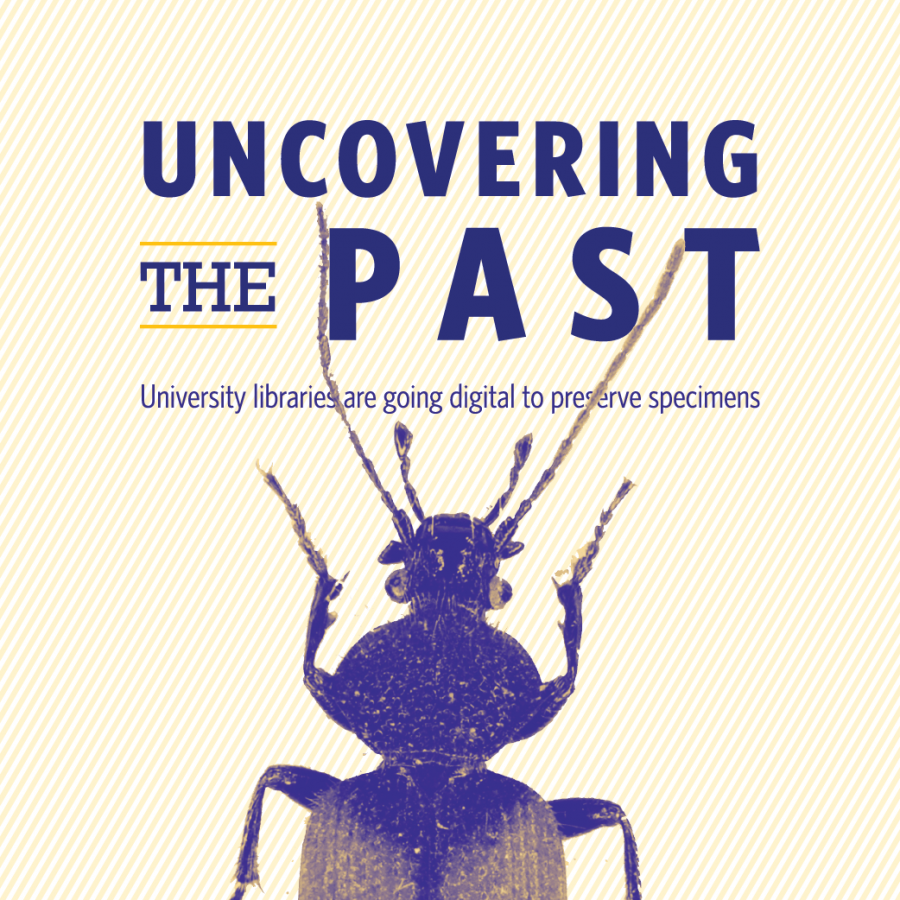 On the south side of campus, a wealth of knowledge sits in dark rooms, stored away in jars and drawers.

This knowledge is in the form of specimens — over 9 million to be exact — including insects, fungi, fossils, reptiles and more, all housed in collections owned by the Illinois Natural History Survey.

Now, these collections are being brought to light.

Since 2010, the survey has taken on numerous digitization projects with the help of multiple grants from the National Science Foundation.

The digitization process, which involves uploading photos and data to online databases, allows these collections to be more accessible to both scientists and the public.

So far, the survey has digitized thousands of specimens.

Making these specimens accessible opens up a long list of important scientific questions that can be answered.

Institutions around the world are undertaking digitization projects of their own, and as a result, it’s become a new tool curators can use to bring their collections into the public eye.

Digitization has also shifted the role of the curator in the 21st century. But at the core of this role lies the documentation of knowledge that spans centuries.

The secrets these collections may hold, and what they may say about our future, could potentially be uncovered as they become more accessible.

Evidence of our history

In a quiet room on the outskirts of campus in the Robert A. Evers Laboratory, Rhianna Baldree and Alex Kuhn, data curators for the survey, spend their time digitizing specimens.

The sign outside the room’s window reads “Command Center.” Inside, Baldree and Kuhn sit at computer stations next to boxes of specimens that are waiting to be digitized.

The process involves three steps. First, they take a picture of the specimen/ Then, they transcribe the specimen’s label, which includes data like the species name. Lastly, they upload a georeference, which is the location at which the specimen was collected.

Baldree and Kuhn said the work can get pretty repetitive.

“Podcasts are pretty good friends of ours here,” Kuhn said.

Still, being intimately involved with the specimens has its benefits. They sometimes handle specimens that were collected in the early 1800s.

“It’s interesting to see the history behind it,” Baldree said.

In a way, natural history collections capture the past — that’s the way Andrew Miller, curator of the survey’s fungarium, sees it.

As the idea of data sharing emerged, the National Science Foundation began an initiative called Advancing Digitization of Biodiversity Collections, which funds the digitizing of scientific collections.

The survey has been involved in eight grants under this initiative. With this funding, they’ve been able to purchase digitization systems and hire workers.

The digitization process can change depending on the type of specimen.

Plants have to be handled carefully, but the process of scanning them has become routine and standardized.

Insects are photographed by the drawer, not individually, because they are so numerous.

Fossils, each unique in shape and size, have to be photographed multiple times, and the resulting images are “stacked” together to create one fully focused image.

Kevin Cummings, a malacologist with the survey who has worked on digitizing mollusk collections, said having an image in an online database is what makes the whole process worthwhile.

If you can see the specimen you’re researching online, you can verify that the corresponding data is correct.

This becomes important when digitizing specimens that were collected centuries ago — sometimes, the species’ name has changed.

“We can change the name in the database,” Cummings said. “We update this every week so it will be correct.”

That way, the survey can verify that their specimens are actually what they say they are — and experts can help them verify this by visiting the collections online.

Jared Thomas, a paleontology research technician for the survey, said they’ve already seen new research published based off of what they’ve made accessible online.

Thomas is the only person working on digitizing the survey’s paleontology collection. Though it’s a slow process, he said it’s important to take the time to make sure it gets done right.

So far, he’s digitized around 1,000 specimens — a fraction of the paleontology collection’s hundreds of thousands of specimens.

“There’s more work here than I will ever be able to complete in my lifetime,” he said.

But if work like this isn’t attempted, Thomas said they miss out on a chance to discover specimens they’ve forgotten about or previously thought were lost.

In that sense, digitization is a win-win. Surveys get to actively improve their own collections, reestablish what they have and share this with the world. In turn, they also benefit from the numerous other digitization initiatives happening at institutions worldwide.

“There are specimens all over the world that we couldn’t afford to see in our lifetime,” Thomas said. “Now, we can.”

In the scientific community, the concept of dark data is used to describe data that exists but isn’t being used.

“It’s very useful for science,” he said, “but they’re almost inaccessible to the scientific community.”

Dietrich has been involved with a specific digitization project called InvertNet, which aims to build a “virtual museum” of arthropods from North American collections.

He sees the project as a way to get this dark data out into the world so that it can benefit science.

“It improves our knowledge and improves the accessibility of knowledge about biodiversity,” he said. “That’s a big part of just being able to document what’s out there — what was there in the past, what’s there now and how that’s changed.”

This could help scientists find answers to some interesting biological questions.

For example, Miller’s efforts in digitizing fungi specimens have enabled them to create maps that show how distribution of species has changed.

“We can layer climate and environment and ask, ‘OK, how does climate change affect some of the movements?’” Miller said. “Or, ‘Is there an invasive species, and how is it moving across the U.S.? Where’s it going to next?’”

Aside from answering scientific questions, Dietrich sees digitization as a way to explore new and innovative applications.

He envisions the possibility of creating a new way to identify species.

“Try to imagine if you’re out and you see a bug in your yard, and you’ve got your cell phone and you take a picture of it,” he said. “It’d be really cool to submit that to an app where it would go and find a match from an image database and tell you what species of bug that is.”

However, that’s the vision for the future — and just one potential application for the use of data that is still being brought to light.

“There’s a lot of potential applications for this stuff,” he said. “It’s going to be a long slog to get it all digitized and out there to be used for science.”

The changing role of the curator

Before, curators would have to travel to other collections just to see specimens they were interested in studying.

“Say someone in Europe wants to know what we have in our collection,” said Jamie Minnaert-Grote, collection manager for the survey’s herbarium. “They can automatically look at it, say, ‘Oh, they have 50,’ and then they can request it. They may have never thought to ask us for these species.”

This could cut down on shipping costs, travel costs and potential damage to specimens.

The day-to-day life of curators has changed now that digitization is in their job description.

Minnaert-Grote said she spends half her time managing data.

“I think as we get more digital, it is going to be spending a lot more time in front of a computer,” she said. “But that’s not necessarily a bad thing, because I think in the long run, it actually helps the process along.”

She said she hopes digitizing can become a part of her everyday routine.

“I would like to just start taking images of everything that comes in, so that we don’t have to rely on grants,” she said.

Without the grants, these digitization projects would not be possible, the curators said.

“If you don’t have the funding for that, it’s extremely difficult,” Miller said.

Now that the survey has an established infrastructure — camera systems and the knowledge of how to digitize — the challenge is to keep the momentum going.

The grants have allowed the survey to start digitizing just a fraction of their collections, but Miller said figuring out how to digitize the rest is part of a question that hasn’t been answered yet.

“A big issue we’re all working on right now is to figure out how to sustain this,” he said.

For Sam Heads, curator of paleontology for the survey, the fact that they rely on federal funding makes him nervous.

“The existence of federal funding isn’t guaranteed,” he said. “As we’ve all seen recently with the changes in government and the current administration’s attitudes toward science and providing federal funding for science, it’s worrying that there’s a chance that these sorts of programs might go away.”

It’s no question for the curators that the data they hold in their collections is invaluable to other researchers.

Getting the general public to see it as such is another story.

“The public at large has a right to access this material,” Heads said. “It’s not just scientific researchers that benefit from being able to access specimen data online.”

The survey’s hope is that increased accessibility to the collections will increase the public’s appreciation for what they do.

“We’ve been struggling with this for years,” Miller said. “We’re not a museum; we’re more of a collection that is behind the scenes, and how do we relate that importance to the public?”

Making natural history collections seem exciting is not the easiest task, but Miller sees digitization as the first step in trying.

When Minnaert-Grote hosts public tours, she always makes sure to show the tour guests their online digitization efforts.

“We’ve had a few people that asked if they could go on and help transcribe, just at home, which is great,” she said.

Every year, the herbarium participates in a worldwide event called WeDigBio, which brings in volunteers to help transcribe specimen records. This year, they transcribed around 2,000 specimens.

“Having these events, it shows people what we have, what we’re doing and we talk about the importance of it,” she said.

Heads’ belief is that the public interest is there, and bringing the collections to the public eye will increase this interest.

“People go to museums, they’re passionate about these sorts of things in the natural world and science in general,” he said.

With digitization becoming the new norm, the work that scientists like Heads do will no longer be behind closed doors.

Now, the public’s right to experience and access scientific knowledge is a central part of what curators at the survey do.

For Heads, it all comes back to his belief that what he does is for the public.

“I believe that we have an obligation as scientists to communicate our science to the public,” he said. “I think that’s a pretty noble endeavor.”