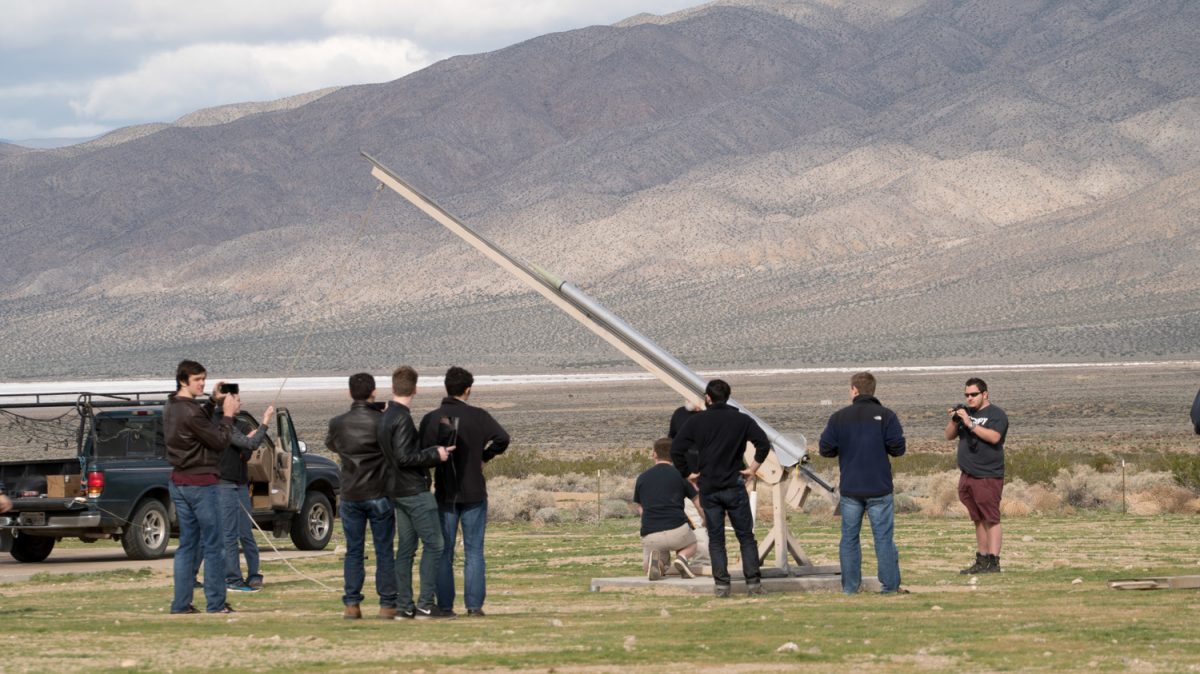 Student Space Systems prepare to launch their rocket into space from the Mojave Desert in California.

When Student Space Systems say they aim high, they mean it literally. SSS is an engineering organization with the single goal of building a rocket that can launch into space.

The closest they have gotten so far was when they launched a Phase III rocket in 2016 that went up 36,000 feet – around the height that airplanes fly.

In order to test out their rocket, the group traveled to the Mojave Desert in California to find a big, open space where they could have the rocket land without harming other people.

The rocket ended up breaking the speed of sound, going more than 1,000 mph at its fastest.

Beforehand, the team had to contact the Federal Aviation Administration to make sure no airplanes were flying in the area around that time.

Augusto Dantas de Oliveira, junior in Engineering, was the project manager his freshman year for the assembly of the Phase III rocket, nicknamed Olympus. He said each rocket is nicknamed after a mountain.

The group originally met around five hours per week to design and build the rocket, but increased meeting time as they put the rocket together.

“Towards the end, there was one day where we got into the shop and we spent six hours putting one part into another part,” Dantas de Oliveira said.

He was also responsible for designing the camera mount for the rocket so members could find the rocket after it returned to the ground.

Dantas de Oliveira said his team is currently working on Phase IV, which will be launched in 2017. He hopes that rocket with go higher than the first. He said the team has yet to decide on a nickname.

He also explained the naming of the Phase III rocket.

“Phase III was the first special rocket that they had launched,” he said. “The first two were small enough where they could just get some farmer’s permission to land on their corn. But this one was big enough that they couldn’t do that.”

“A lot of club members went but I did not go. I kind regret that but it’s okay,” he said.

Shree Das, senior in Engineering, is the administrative president of SSS. He said he could not attend the launch but later saw it in a video.

“When I saw the video for the first time, I was struck. It was really something. It’s really cool that undergraduates can do this kind of work,” he said.

He said he first joined in fall 2014 when the club was starting to first get its footing.

“I’ve been involved in Student Space Systems for basically all of my undergraduate life. I’d had a great experience; I’ve learned a lot about rocketry. It’s something I’m really passionate about and I really care about the club,” Das said.

Das hopes to finally get one of their rockets to breach the Earth’s atmosphere by 2020. He knows that this is a very big goal, but he thinks the club can accomplish it.

There are more than 150 active members, and most are split into different projects outside of the Phase IV rocket.

Eddie Smoliak, junior in Engineering, was not a part of the Phase III rocket team, but is instead working on a thrust vectoring apparatus for another one of SSS’s projects.

“We have a lot of different groups that work on several projects; we have several rockets going. But I guess the overall mission of SSS is to get students to learn about all of the different aspects that could go into rocketry and to give good experience into something that a student might be interested to specialize in,” he said.

Smoliak also said what he’s learned most from the club is the importance of design and research before putting together the actual rocket. Students have to check every detail to make sure that the rocket with work.

“I was personally working on being able to make the engine turn and rotate to control the rocket’s flight. That’s called thrust vector control,” Smoliak said. “Another group is working shape of the engine and the type of fuel used.”