Bring the luck, then go drinking 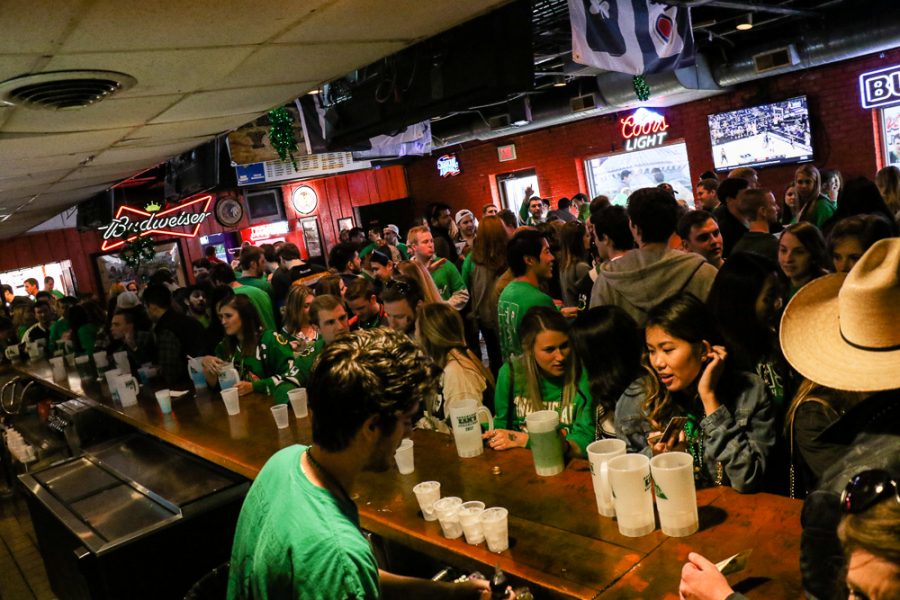 A bartender serves drinks to people celebrating in KAM’s on Unofficial on March 2. Assistant features editor Marissa explains official and unofficial University traditions students can choose to take part in.

Drinking-related trouble can be upsetting, not to mention embarrassing, for everyone. However, such misfortunes can also be meaningful shared memories. I still remember one awkward time when my friends and I were not allowed into a bar and I must admit, I’m still confused as to the reasons why.

Last semester around October time, I heard that Zedd was holding an event at the PRYSM bar in Chicago. My friends and I decided to take this opportunity to go to a party and have some fun. We bought our tickets about a week in advance and booked a hotel.

However, because we were just four people, we didn’t reserve a table. The cost was too high, even if we split it, so we just paid the general admission fee to the event It was our first time going to the PRYSM bar and we were feeling a little apprehensive.

The information on the tickets told us that the event would begin around 10 p.m., but we knew that midnight would be the real start and not wanting to be too early, we agreed to meet at PRYSM at around 11 p.m.

As we approached the bar, we could see long lines of people waiting to get in, including some of my classmates who I knew were underage and didn’t have fake IDs.  The line wasn’t moving and looking around, I could see lots of girls wearing colorful dresses and high-heeled shoes. I remember thinking to myself, it must be hard to party in high heels.

After half an hour, the line had moved forward several feet. My classmates were already inside — they had reserved a table so they were waved through the VIP entrance.

After about 50 minutes of waiting, we were close to the entrance. The over-21s in our group were reassuring me and my friends, saying we had been admitted before in other bars, so everything would be fine. We had recited and learned the information on our fake IDs and we were confident we would be allowed in.

However, before we could even show our IDs, security pointed out the logos on our shoes and clothes and said NO firmly. We were still not clear about what was happening and asked him for explicit reasons. He didn’t reply but just kept pointing.

We even asked whether we could wear our T-shirts inside out, but the security guy just repeated his decision, not even looking us in the eye. Faced with a strict refusal, we tried to depart with some grace and contacted friends in Chicago to change our clothes and maybe try again to get into PRYSM.

After a round trip from the north side of Chicago to Michigan Avenue for a change of clothes, we returned to PRYSM again at around 12:50 a.m. Wearing simple shirts in solid colors, we were confident we would be let into the bar.

When we got in line again, we saw several Chinese students wearing clothes with logos and standing outside the bar with disappointed faces.

We encouraged each other again and double-checked our outfits. We were sure nothing could go wrong this time and were looking forward to a good time. However, when we reached the front of the line, security’s decisive words, “The bar is full, no admission anymore,” immediately extinguishing our enthusiasm.

There was absolutely no room for discussion or argument. After two hours of trying to get into the bar, we were too tired and disheartened to try anything else.

Later, we checked the dress code for the event and couldn’t find out any written rules referring to no logos on T-shirts, though the information did say, “collared shirts and fashionable clothing are recommended.” However, we found that we had missed the following: “discretion at the door.”

Maybe the security guy was in a bad mood at that moment in time. Maybe he thought we were underage even though he hadn’t seen our IDs. Maybe it was because we didn’t reserve a table…

The reasons are unclear, but after this experience, we realized that luck is an important factor when trying to get into a bar and we also learned to dress as simply as possible to avoid security being able to point out any mistakes in our outfits.

Also, if you are rich and book a table, age and attire are no longer a problem.  Our classmates with a reservation were wearing amazing designer outfits with large logos but were admitted to the bar.

Anyway, that experience is a funny story that I often share over dinner, and Unofficial on the way, you’re bound to make a couple of memories that could turn into funny stories too. Feel free to share yours!

Yifan is a sophomore in LAS.