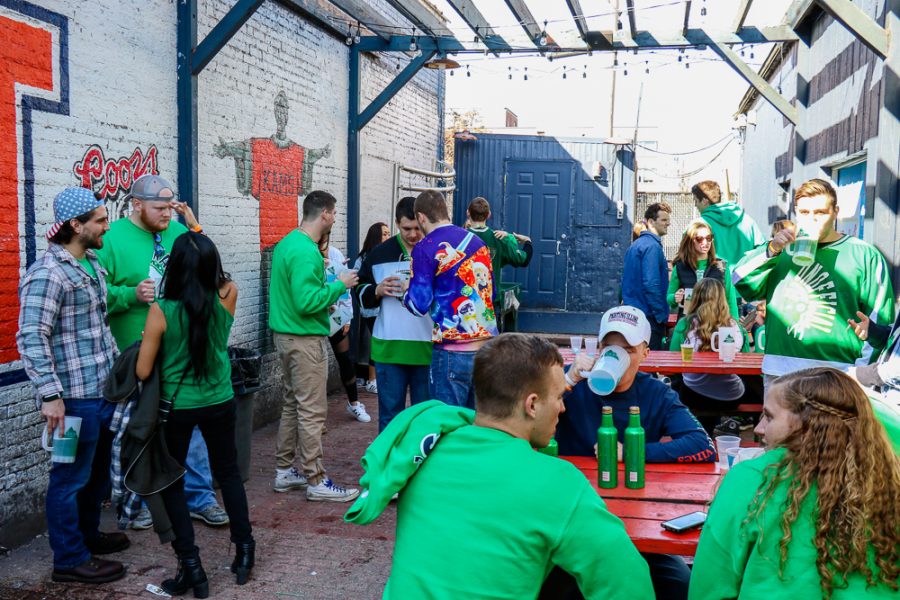 Patrons of Kam’s hang out in the beer garden during Unofficial on Friday.

By this time of year, most of campus, even out-of-state freshmen, have a pretty good idea of what it is. Unofficial is said to have originated in 1995, and it is essentially an alternate St. Patrick’s Day on the University of Illinois campus. Because St. Patrick’s Day falls during spring break, some local bar owners came up with idea to celebrate an “unofficial” St. Patrick’s Day on campus.

It has gained popularity through the past two decades, and students from different campuses have been known to visit the University solely to celebrate this weekend. It’s traditionally marked by bars opening at 7 a.m., binge drinking, attending classes in a drunken state and the opportunity for students to celebrate St. Patrick’s Day.

In 2012, as many as over 10,000 people acknowledged that they would be partaking in this event on social media websites. Many students regard “Unofficial” as an actual holiday and treat it as such.

This year, it is set for the weekend of March 2 through 4. Students typically wake up as early as possible and participate in day drinking. Unofficial usually takes place on the first weekend of the month, one to two weekends before actual St. Patrick’s Day, which is on March 17 this year.

Unofficial has usually been celebrated in the campus bars, but with the recent new regulations from the office of Mayor Jerry Schweighart, it is said that students will take to various apartment complexes to celebrate the unofficial campus holiday.

Such regulations include bars being prohibited from selling and serving alcohol before 10 a.m., hosting any private functions or serving pitchers of beer, wine or spirits. Even though the bar entry age for campus is 19, on Unofficial, it will be raised to 21. In an effort to control private parties, the mayor’s office will also not be issuing any keg permits, making it illegal for more than one keg to be possessed per residence.

Is it just a “more-than-two-decade-old excuse for students to wear green and get drunk on a day other than March 17”?

Is it more regulated this year?

There has been recent speculation on participation over the past couple of years in light of new regulations enforced by campus officials and police.

Freshmen are now told that this is a prime time to head home for the weekend to avoid staying out of trouble. So, in addition to staying safe and cautious during the festivities, it is important to know your rights for the upcoming weekend.

Arden Youn is a freshman in Business.