The Chief is gone, retire its Unofficial apparel 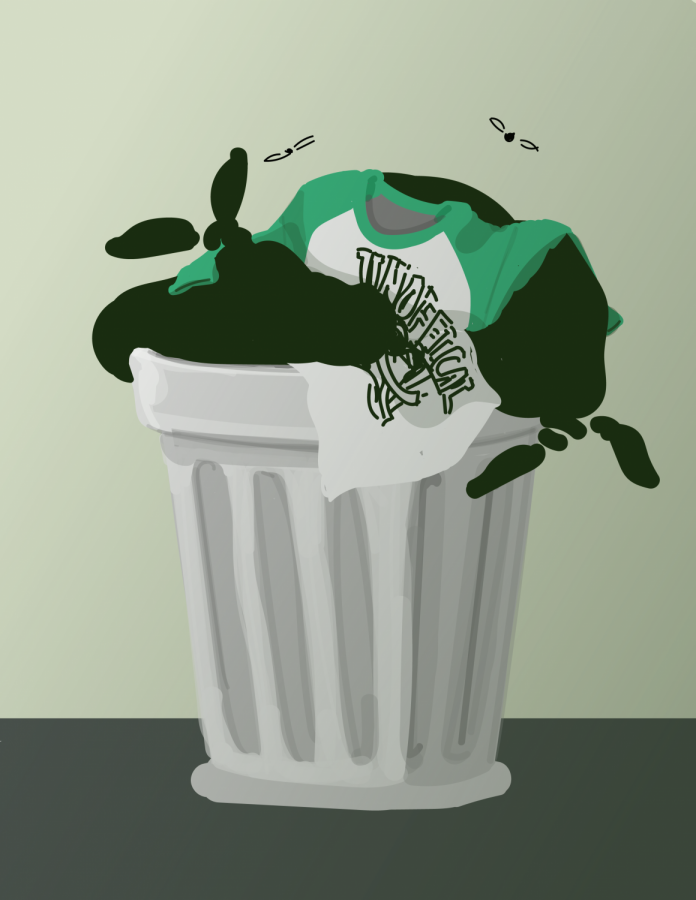 A bright green tee displaying Chief Illiniwek with his headdress replaced with the letters “U-N-O-F-F-I-C-I-A-L” has become a common sight in the days leading up to the University’s infamous drinking holiday. Whether displayed in T-shirt stores or touted by anticipating students, Unofficial merchandise portraying the Chief has gained popularity in the last few years as part growing support for the retired University symbol.

But by employing negative stereotypes these shirts misrepresent and disrespect the Native cultures of both students on campus and communities throughout the United States. On Unofficial, students should ditch the clothing that bears this outdated symbol.

“Chief Illiniwek” was created in 1926 by a college student in the Boy Scouts for a football game and was adapted as the University’s mascot soon afterward. The Chief was retired in 2007 following pressure from the NCAA to ban “hostile and abusive” references to Native American culture.

The University had convincing reasons for the removal. The invented character was named after the Illinois Confederation, a group of Native American tribes forcibly removed from their Midwest lands by the Indian Removal Act of 1830. The Chief’s attire and dance were unrelated to Illinois culture and instead drawn from Sioux and Plains origins respectively, each with substantial American alterations.

Furthermore, the Peoria Tribe of Indians of Oklahoma, the direct descendants of the Illinois Confederation who have ancestral claims to the University’s land, have openly opposed use of the Chief since 2000. This mascot inaccurately caricatured Native imagery without their consent and claimed it for the University’s entertainment.

The same issues apply when the Chief’s face is seen on those green tees. Additionally, by employing the “Drunken Indian” stereotype — also historically found in the mascot’s portrayal — associations between the Chief and a drinking event like Unofficial make light of the historically high rates of alcoholism in Native American communities.

This trend is largely caused by low education and employment rates in these communities, along with the historical trauma of genocide and relocation carried out by the United States embedded in Native history. Native students shouldn’t be exposed to these reminders during Unofficial.

These portrayals of the Chief run counter to a community that is tolerant and aware of different cultures. They instead reinforce stereotypes for those who see them and hinder the formation of identity in young Native Americans. These effects misinform the general public and further disempower an already overlooked and historically mistreated culture. Native American history and tradition should be learned in classrooms and conversations, not “honored” in a halftime spectacle or a drinking holiday.

The Chief’s appearance in Unofficial wear is relatively recent. Looking back, neither promotional posters from the 90s nor pictures of the holiday’s partygoers in 2011 reveal any use of the insensitive image. The apparel has only been popular over the last few years, joining other recent acts of vocal support for the mascot. One example is the Students for Chief Illiniwek, an RSO founded in 2014 that promotes use of the Chief image around campus.

Despite this perceived increase in visibility, the image had never gone away according to some Native students, with clothing and emblems bearing the Chief still worn and displayed throughout campus.

Still, the motivations of Chief supporters are sensible on some level. The University has not had a mascot in over a decade, which might encourage students to nostalgically rally around Chief Illiniwek as a unifying image — despite how no current students attended while the mascot represented the University. As well, there appears to be a similar rebellious spirit between celebrating Unofficial and supporting the retired mascot, both of which run directly against the University’s wishes.

However, none of these reasons justify the Chief’s continued use. The Illini community should find another mascot to unite under instead of defaulting to a culturally insensitive caricature. The campus should work to respect and understand communities of all backgrounds for a more compassionate path forward. It’s time to abandon the Chief starting this Unofficial.

Zack is a sophomore in Engineering.