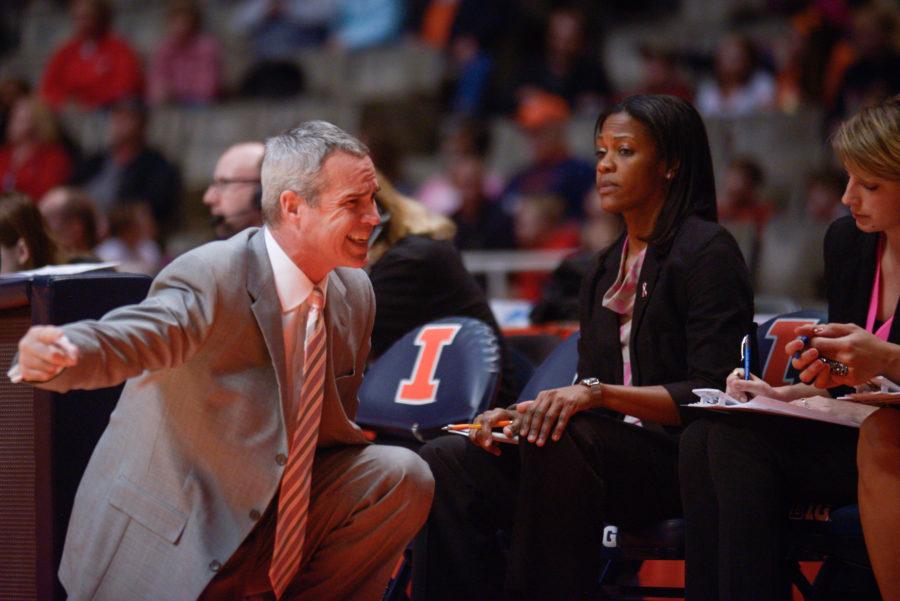 Illinois’ Mike Divilbiss, former associate head coach, offers advice to his team during the game against Ohio State at the State Farm Center on Feb. 14. The Illini won 66-55.

The Illinois football program is not the only sport at the University that is dealing with allegations of player abuse.

The Daily Illini obtained letters addressed to Chancellor Wise that were sent by the families of Jacqui Grant, Taylor Tuck and Taylor Gleason, which detailed verbal and emotional abuse on the part of Bollant and Divilbiss.

The families that spoke to The Daily Illini said they were informed of an internal review of the matter by the Chancellor’s office after they sent their letters.

According to a statement from the University’s Public Affairs office released Monday afternoon, the review was prompted by Athletic Director Mike Thomas in late April, and was conducted after concerns were raised by the Grant, Gleason and Tuck families.

According to the families The Daily Illini spoke to, Divilbiss left the program Thursday. He arrived at Illinois with Bollant in 2012 after serving in the same position under Bollant when the pair were at Wisconsin-Green Bay.

In the Public Affairs office’s press release, the decision to part ways with Divilbiss came with the inclusion of the “current goals and objectives of DIA and the women’s basketball program.”

The University’s Monday morning’s press release stated that a search is underway to replace Malone.

When asked for further comment Monday morning, the University could not respond due to “privacy and regulatory” laws, according to Robin Kaler, campus spokeswoman and associate chancellor for public affairs.

Kaler confirmed that the University did receive the three letters from the Grant, Gleason and Tuck families and that a letter from Thomas was sent in reply. Kaler said the University always “takes such allegations very seriously.”

In the Public Affairs office’s release, it was stated that after the preliminary review, the Office of Diversity, Equity and Access and Academic Human Resources found that there was “no violation of applicable law or University policy.” According to the release, the offices conducted more than 20 interviews with individuals who are both currently or formerly affiliated with the program.

In total, eight players from last season’s Illini team will not be at Illinois next season — four due to graduation and four due to transfer.

According to the families that spoke to The Daily Illini, the review was conducted by Kaamilyah Abdullah-Span, who is the associate director of the Office of Diversity, Equity and Access. Abdullah-Span and her office report to Associate Chancellor Menah Pratt-Clarke.

Kaler and Brown were not able to comment further on Divilbiss’ job status at the moment because of personnel policies, or comment on allegations made in regard to specific players because of the students’ FERPA rights.

University internal reviews are not subject to Freedom of Information Act requests.

The letters highlighted that Bollant and Divilbiss threatened to pull players’ scholarships, attempted to create division in the team using racism and ignored or minimized injuries.

One of the claims made by the letters, which was echoed by Lydia Tuck and LaKeisha Coleman — Amarah Coleman’s mother — was that Bollant and Divilbiss enforced what was called the “Dog Pound.” The “Dog Pound” was the team’s group of nonstarters, and was required to go to extra practices.

“I told him the dog pound is where strays go,” Lydia Tuck said. “It would be different if Illinois’ mascot was Huskies or Wolves.”

Lydia Tuck’s other daughter, Morgan, was a starter for the University of Connecticut women’s basketball team, which won the 2015 National Championship. Lydia said Morgan’s time at UConn has been “night and day different” from what Taylor has experienced at Illinois.

Lydia added that she wasn’t talking about the team’s relative levels of success — UConn has won back-to-back national championships, while Illinois is 43-51 in Bollant’s three seasons.

According to the families’ letters, Bollant and Divilbiss made repeated racist remarks in attempts to divide the team. Lydia Tuck described an interaction between Divilbiss and freshman Kennedy Cattenhead when Divilbiss told Cattenhead that he could tell she was thinking, “Oh, we’re going to beat those white girls,” in reference to an opponent.

LaKeisha Coleman referred to a similar situation that Amarah went through. LaKeisha said that coaches would often reference player’s hometown neighborhoods, particularly the West side of Chicago.

“(Coaches) joked about, ‘Oh well, we are playing an all-black team now, they think they are going to run over us, but we are going to put the girls from the West side out on them,” Coleman said. “As coaches you are their protection, and they should not be subjected involved in anything like that.”

Lydia Tuck added that Bollant took seven players to get massages during the team’s trip to the Virgin Islands in November. She said that Bollant admitted it was wrong when she confronted him about it, but according to records obtained by The Daily Illini under the Freedom of Information Act, the University did not self-report any massages in its annual collection of self-reported violations.

Benefits provided to some members of the team but not others — including any student managers on scholarship — is an NCAA violation.

During the University’s review, the Division of Intercollegiate Athletics’ compliance staff determined that no NCAA violations had occurred.

According to the Gleason’s letter, Taylor suffered a second degree high ankle sprain in October and was not treated correctly. She continued to practice and play, and according to the letter, “was never completely off her ankle” and was not given a boot to wear.

On Jan. 15, Taylor received another X-ray which showed she had an avulsion fracture in her foot. An avulsion fracture occurs when a small piece of bone is pulled away from a larger bone by a tendon or ligament. Gleason’s final game of the season was the Jan. 4 game against Penn State. She played only seven games last season after playing in 28 games — and starting eight — in her freshman season.

The Gleasons ended their letter by saying that “if (our) daughter needs surgery and her injury is debilitating in any way, (our) attorney will be contacting you.”

The Public Affairs’ press release stated that the University is continuing to “evaluate” concerns related to medical treatment, which were raised by the Gleason family in the family’s letter addressed to the University.

In the Grant’s letter, the family detailed Jacqui’s bout with mononucleosis during her freshman year, alleging that Bollant and Divilbiss forced her to play with an enlarged spleen — which if ruptured, can result in shock or death.

The Grant and Gleason families declined further comment on the letters they sent to to the Chancellor. Calls to the family of senior Alexis Smith — who is also transferring out of the program — were not returned.

Brown said that none of the players currently on the team are taking media requests at this time.

“The tone of any organization is set from the top down,” Lydia Tuck said. “Even things that were not done by (Matt Bollant), he’s the head coach, he was well aware of it, he allowed it to go on.”