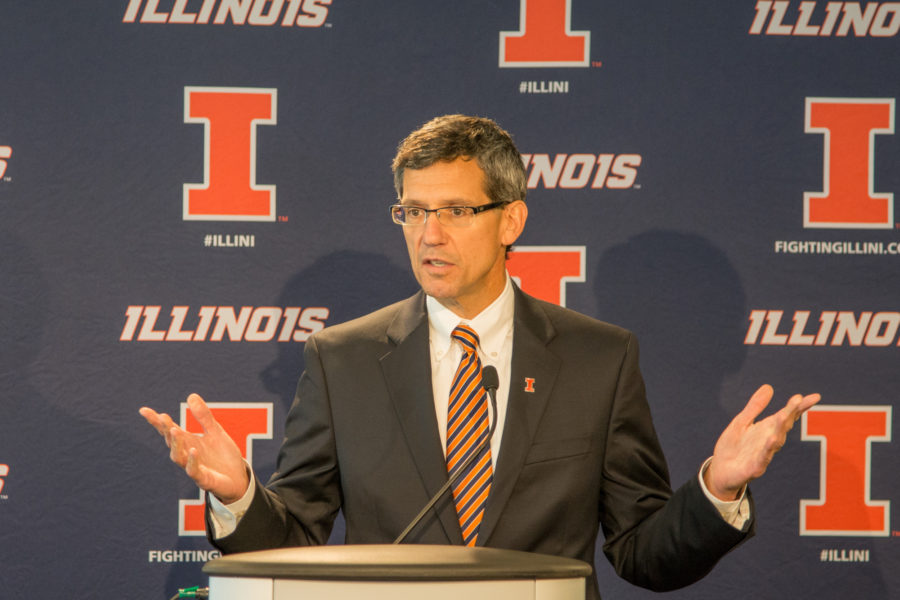 The University released the results of Chicago-based law firm Franczek Radelet’s lengthy investigation into the athletic department on Monday.

The report explored the department’s handling of sports injuries and accusations from student-athletes in the football and women’s basketball programs. The release came adjoined with the resignation of now-former Athletic Director Mike Thomas, who wasn’t found to be on the wrong side of any of the accusations in the report. Yet, Interim Chancellor Barbara Wilson dismissed Thomas, citing “distractions” in the athletic department

The report has left two of the most prominent positions in the athletic departments with “interim” preceeding their titles: athletic director and head football coach.

Now Paul Kowalczyk looks to take over Thomas’ duties as the report continues to fuel criticism toward former head football coach Tim Beckman and other members of the athletic department.

The report is a culmination of more than 100 interviews, more than 200,000 documents and is precisely 1,267 pages. According to a Freedom of Information Act request, both the prior investigation and the Franczek Radelet investigation cost more than $1 million — and that total is from before Beckman was dismissed. Interim Chancellor Barbara Wilson said that they have not calculated the total cost of the investigation from Franczek Radelet.

The Daily Illini explored the report, here’s what our top 10 takeaways from the report:

Beckman was at the center of the report. The report named the 50-year-old coach as the primary issue surrounding the allegations about the football program. Beckman pushed his players beyond what most felt was in the best interest of the players. One team physician described Beckman’s approach as “berating” by using names like “pussy” and “bitch” in reference to players. Additionally, Beckman used purple jerseys for players who lost in drills or were injured, to represent Northwestern, which Beckman continued to symbolize as Illinois’ principle rival.

These players had finished their four years on the football team and were eligible to graduate after the fall semester, but wanted to stay another semester to complete a particular aspect of their education. Beckman convinced the players to relinquish those scholarships and leave early so he could award the scholarships to other players.

Cvijanovic was the catalyst to Beckman’s eventual fall in late August, which resulted in Thomas’ firing. After Cvijanovic went on a Twitter tirade accusing Beckman and the athletic department of mistreatment and mishandling of student-athletes, the University launched its investigation into the accusations. The report found that the majority of Cvijanovic’s accusations were accurate.

Bollant, who is currently named in a pending lawsuit from seven former women’s basketball players, conducted the proper handling of injuries along with athletic trainers assigned to the team. The lawsuit alleges that Bollant and former associate head coach Mike Divilbiss forced players to play through minor and severe injuries and subjected them to racism. Divilbiss left the program in May.

While there are many contradictory stories surrounding the allegations of physical altercations, the report discovered one instance where Beckman possibly held down a player in what some described as a fight, while others didn’t. The report concluded that the force was appropriate.

Beckman also said he didn’t believe in hamstring injuries. Whether or not he was joking, players took the statements as reality, causing a culture where players were afraid of reporting hamstring injuries to the training staff.

There were several athletic trainers who left the program, citing that Beckman was hard to work with. Beckman would try to interfere with medical decisions on injuries, as well as encouraging players not to report injuries.

There were six athletic trainers for the football team from 2012 to 2015, and five of the six were hired under Beckman.

Interim AD Paul Kowalczyk took over control of sports medicine in Aug. 2015 amidst the allegations of mistreatment by coaches and team trainers.

7. Treatment methods for spine, neck and head injuries were questionable

The report said Beckman also tried to intervene with more serious injuries. Beckman suggested that players with spine neck and head injuries were fine, and urged them to play. Beckman referenced his own neck injuries in college that he played through to foster a culture of toughness and playing through injury.

One of Beckman’s players suffered a spine injury and was told by Beckman to “move his head” while lying on the field after the injury.

8. Mike Thomas was not associated with mistreatment

Thomas was not knowingly associated with any of the mistreatment for either program. Regardless, interim Chancellor Barbara Wilson made the decision to fire Thomas, citing that he was a “distraction.” Thomas’ buyout will cost the University $2.5 million.

“I understand the chancellor’s viewpoint that my continued presence may create an ongoing distraction for our students, coaches and staff, and I accept the situation.” said Mike Thomas in a statement Monday.

Beckman’s culture of belittling injuries was further supported by Toby Harkins. Harkins was the athletic trainer who most agreed to Beckman’s philosophy. Harkins was let go by the university after not being liscensed by the state of illinois in his first eight months. Harkins helped belittle the injury and make it a dangerous environment for players.

10. Assistant football coaches were found in opposition to Beckman’s philosophy

The report said that assistant coaches were not found of any wrongdoing. The only situations cited were those of misunderstanding between the coaches and players, or the actions had little to no impact.