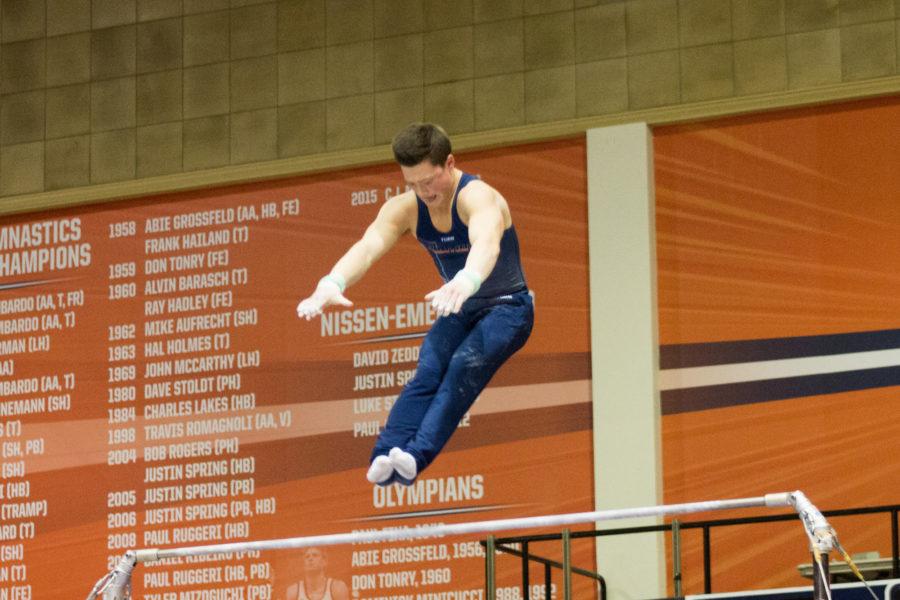 Illinois’ Alex Diab performs a routine on the high bar during the meet against Temple & UIC at Huff Hall on Saturday, Feb. 6, 2016.

The Illinois men’s gymnastics team’s depth was on full display this Saturday at home. Head coach Justin Spring rested freshman Alex Diab against the University of Illinois at Chicago and Temple in preparation for their meet at Minnesota.

The team still managed to post a season high score of 436.550 with the help of athletes who are not always in rotation.

“You can’t just be like, ‘oh those five top guy’s got it,’” Spring said. “No, we need everyone to be relentlessly going after (it). Even if you’re ninth in the lineup spot … Harry was a great example.”

Sophomore Harry McLellan had not competed at all this season coming into the three-way meet, but didn’t miss a beat. He tied his career high with a 13.950 on pommel horse and added a 14.100 on vaultRB.

Another new contributor on the weekend was sophomore Matt Foster. Performing in four out of the six events for the Illini, as opposed to just two last week, Foster was able to put on a show in front of his home crowd and family — the Illini hadn’t competed at home in three weeks.

“I always have a couple of my best friends on the men’s tennis team rolling through,” Foster said. “So being able to have that noise and just the energy … it’s just a great feeling.”

Foster posted a season high 13.900 on floor exercise to begin the day for Illinois.

Since returning from a torn patella tendon, sophomore Chandler Eggleston is showing why he was once named an All-American. He has earned vault and floor exercise titles for three straight weeks, and was named the Big Ten Gymnast of the Week for his efforts in Saturday’s home meet.

“No surprise. The kid is a stud. He came in as a freshman and was NCAA runner-up on floor and vault,” Spring said. “No reason to not expect the same caliber from him, even coming off the injury.”

Eggleston has only reached half of his potential, according to his head coach. Spring expects the sophomore to contend for national titles not only on floor and vault, but high bar, too, after Eggleston incorporates a big upgrade into his routine on that apparatus in the next few weeks.

Not to be outdone by his teammate, the accolades keep coming for freshman Johnny Jacobson. After earning his first career title and team high score of 86.500 in the all-around competition Saturday, Jacobson was named the Big Ten Freshman of the Week for the first time in his career MondayRB.

“(I’m) so excited for Johnny just because he kind of hasn’t been at that level,” Spring said. “Where he’s at mentally and his approach … I hope he just takes this and just keeps running forward.”

Jacobson’s breakout performance surprised his head coach, who mentioned that the freshman had been struggling earlier this year. Now Spring believes the freshman will play an integral part in the team’s success later this season.