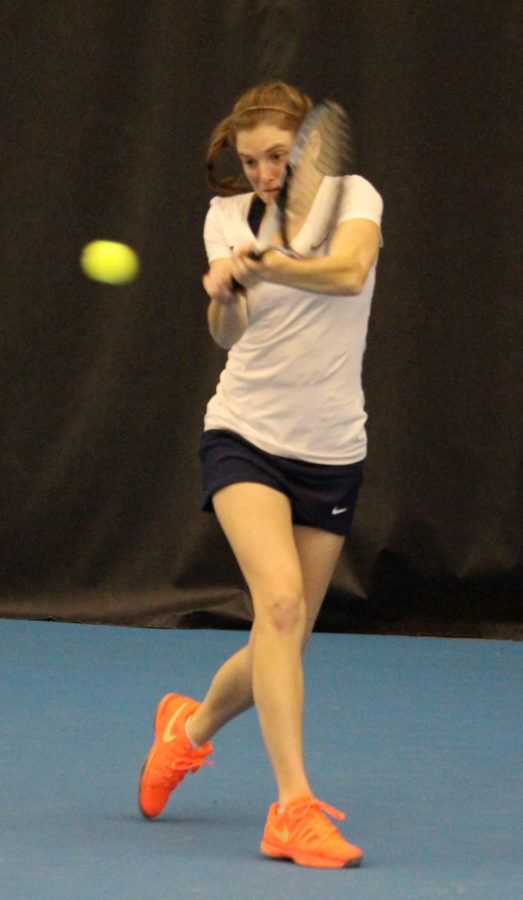 The Illini host No. 49 ranked Depaul. Depaul is 2-5 in the spring season, with victories over Houston and Minnesota. The Illini are 4-3 this spring.

“We gained some confidence with the win over USF but certainly understand we need to do a lot of things better,” head coach Evan Clark said. “We will need to play a high level on Friday night to beat DePaul.”

The Illini started off practice on Monday, working on point play and individualizing practice sessions for players to work on improving in certain areas.

“Personally, I am trying to balance my health with hard practices,” junior Alexis Casati said. “We’ve done a lot of running and lifting this week after hard practices, so I have spent extra time in the training room to avoid injury.”

Casati came off one of her more positive weekends of the spring, winning both her singles and doubles matches. Not only was her victory important personally, but it also brought the Illini back over the .500 record mark.

“The atmosphere has been positive,” Casati said. “We’ve still been working hard and have moved on from our win in preparation for this weekend,”

Although Depaul’s record doesn’t pass the eye test, it has faced its fair share of tough opponents. The Blue Demons’ five losses are to Tulsa, Purdue, Mississippi State, William and Mary, and LSU — all teams ranked in the top 50 in the most recent ITA rankings. The Illini have been preparing vigorously all week.

“We have really tried to raise our focus and awareness level in practice, especially during point play,” Clark said. “We know we need to have more consistent high level practice sessions if we want to have positive match results.”

With only one senior — Emily Barretta — on the team, this young Illini team still has lots of room to grow, yet they’ve still managed a positive spring season so far.

“I think that we could be a little more self-disciplined in practices and matches,” Casati said. “Sometimes we have let leads slip away or not started out well because of errors. Everyone has been better on that this week though and I think that will keep improving over the season.”

Illinois’ match against Depaul will also be good preparation for the Big Ten season, which is right around the corner. The Illini kick it off with a showdown against Northwestern on Feb. 26.

“We are really trying to take it one match a time and not look ahead,” Clark said. “We are obviously really trying to maximize every match opportunity that we are given as we know those experiences will help us moving into Big Ten play.”