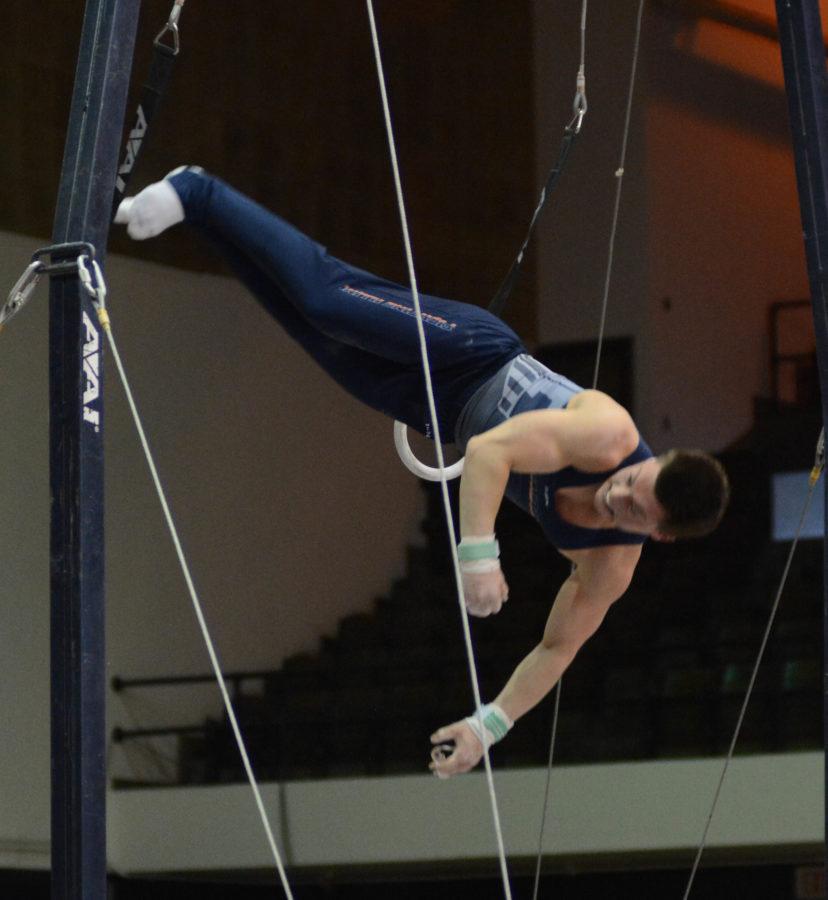 During the first day of competition, the 5-foot-2 all-arounder performed well on vault and still rings, scoring 14.200 and 14.600 respectively – but struggled on high bar and pommel horse posting mediocre scores 11.100 and 10.350 on eachbr.

“I enjoyed competing against the best guys in the country, fighting for that national team spot,” Diab said, “I had some ups and downs, but (overall) I had a good competition.”

The freshman credited his low score on pommel horse to simple and uncharacteristic mistakes, but mentioned that his high bar score was a result of him trying to implement some new upgrades into his routine.

“It’s actually quite rare that you work upgrades into the regular season,” head coach Justin Springbr said. “He did a really good job of staying focused even after making some mistakes on some newer routines.

“He was resilient this weekend. He’s got the maturity of a much older competitor, as a freshman.”

Even though Diab struggled on the two apparatuses, his all-around score of 77.950 was still among the top 42 gymnastsbr — allowing him to advance through the preliminary round and into the Winter Cup finals.

Diab bounced back from his lackluster first day with an all-around score of 81.350 and had the opportunity to compete alongside former Illinois star C.J. Maestasbr.

Maestas and another former Illini, Paul Ruggeri, were the only two Illinois gymnasts to earn spots on the U.S. National Team – putting them on step closer to the 2016 Summer Olympics in Riobr.

“I totally look up to those guys, those past Illinois alums,” Diab said. “I had an awesome opportunity to be in the same group with C.J. So me and him were … cheering each other on.”

The finals marked the end of the road for Diab, but his total score of 29.150 on still rings earned him an eighth place finish, in what Diab described as his, “highlight of the meet.”br This event has been the all-arounder’s specialty throughout his freshman campaign, earning him his only collegiate career title.

Spring was able to watch Illinois signee Jacob Light competebr, and believes the teenager will bring a lot of talent to the team when he suits up in orange and blue this fall.

“Jacob has the goods to be a great NCAA competitor,” Spring said. “The routine difficulty was there … he just wasn’t in position to hit them quite well.”

Illinois’ head coach described his recruitment of Light as a perfect match and said that the soon-to-be Illini showed the type of passion for gymnastics that is an essential part of any great program.

Spring’s squad will now have a little less than two weeks to fine tune their routines before hitting the final leg of the season. Awaiting them are the Air Force, Michigan, and defending national champion Oklahomabr.