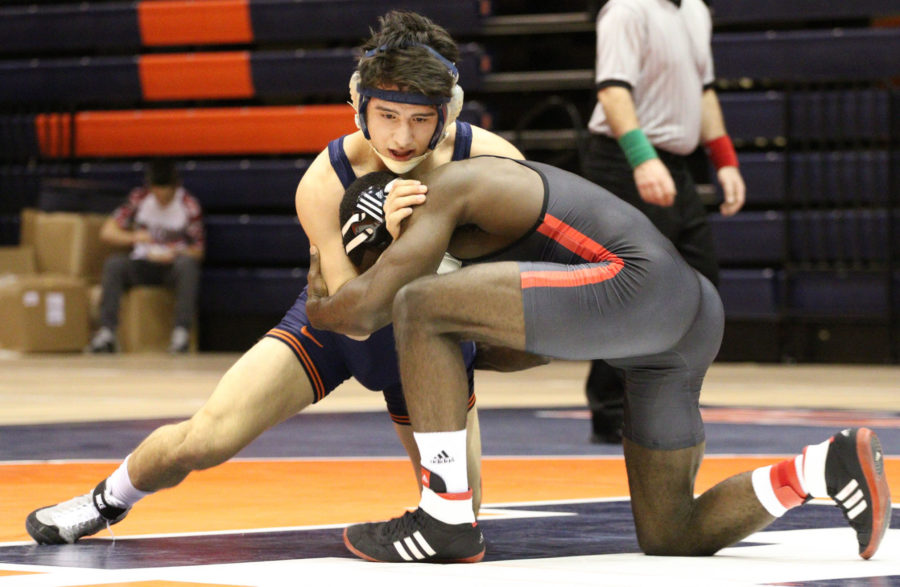 Illinois’ Isaiah Martinez attempts to bring down Nebraska’s James Green during the wrestling match vs. Nebraska at Huff Hall on Jan. 23. The Illini lost 22-9.

New York – Boos erupted from the crowd at Madison Square Garden as Illinois wrestling’s Isaiah Martinez was tied with Penn State’s Jason Nolf with 1:43 left in the National Championship match.

But with 12 seconds to go, Martinez saw an opening and got the takedown to claim his second-straight national title, winning on a 6-5 decision.

“As the clock started ticking down, he was reaching because I was slapping his hands down real hard,” Martinez said. “I just felt it right away, pulled it and ducked.”

The 157-pound Martinez had already faced Nolf twice this season before their date at the Garden.

The first matchup came at the end of January in Champaign where Nolf pinned Martinez to give Martinez his first loss of his collegiate career. The second was in the Big Ten Championships in early March when Martinez beat Nolf in overtime.

Their Madison Square Garden rubber rematch was one of the most highly anticipated events of the NCAA tournament.

“I had a feeling it was going to come down to me and him,” Martinez said. “I just don’t think anyone knows the right way to wrestle him, and I’ve kind of figured it out.”

Martinez has faced a lot of difficulties this past season, from losing his first match as a college wrestler to losing his father.

“It was tough this year,” Martinez said. “It was hard dealing with a lot of adversity. But I’m glad I stuck with it and got the job done.”

Illinois head coach Jim Heffernan felt that Martinez held back some of his emotions, not only throughout the season, but even after his win, calling him a “very thoughtful kid.”

Martinez attributed part of this to his coaches, who he said talked about this a lot.

“They know just kind of know what I had to go through,” Martinez said.

The pressure of being the defending champ didn’t help Martinez either, Heffernan said.

“It’s overwhelming,” Heffernan said. “I think with all these social media things and all this attention he’s getting, it’s difficult. I do think it got to him a little bit.”

While Martinez earned much of the attention, two other Illini also finished the day with rankings.

In the 165-pound consolation semifinal, Steven Rodrigues was pinned by Missouri’s Daniel Lewis. But the the Mount Kisco, New York, native ended his collegiate career with an 8-5 victory over Virginia Tech’s David McFadden to earn a fifth-place finish.

The three other Illinois wrestlers sent to the finals did not fare as well.

In the 197-pound category, Jeff Koepke lost 5-3 to Blake Stauffer of Arizona State and was eliminated after the consolation round Friday morning.

Heavyweight Brooks Black was eliminated by Minnesota’s Nick Kroells for the second year in a row in the fourth round of the consolation bracket.

In the 174-pound category, Zach Brunson lost 3-1 to Missouri’s Blaise Butler in the fourth round of the consolation bracket.