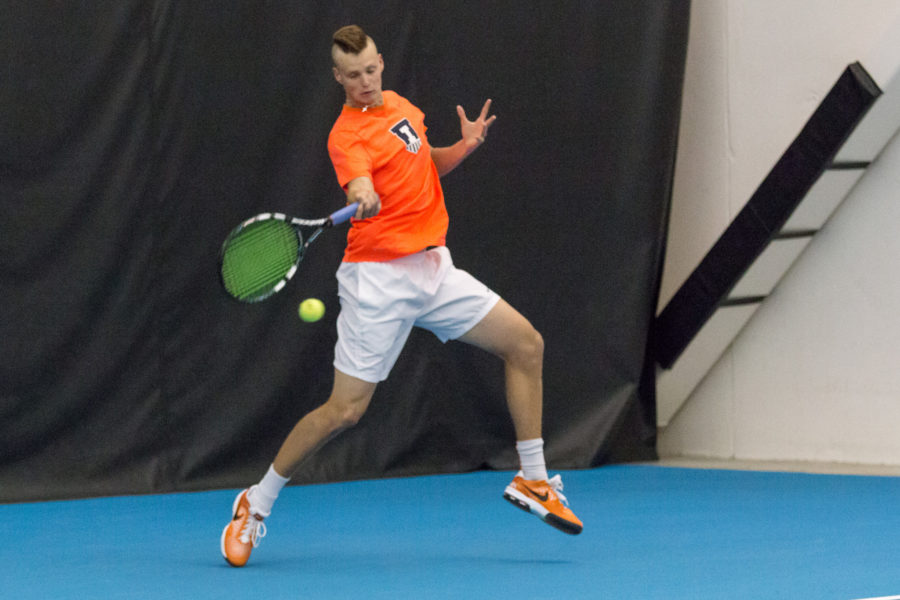 Illinois’ Brian Page swings for the ball during the match against Wisconsin at the Atkin’s Tennis Center on Sunday, April 3. The Illini won 4-0.

The red-hot, No. 15 Illinois men’s tennis team extended its five-match winning streak to seven this weekend against No. 63 Iowa and unranked Nebraskamk.

With the two victories, the Illini improved to 15-7 overall and 6-1 in the Big Ten, setting up a much-anticipated matchup with No. 21 Michigan at Atkins Tennis Center next Sundaymk.

The Illini opened the weekend in Iowa City, Iowa, going up against the Hawkeyes. Iowa has struggled throughout the entire Big Ten season, winning just one contest thus farmk.

Illinois opened up the match with another doubles-point victory, when the Julian Childers and Brian Page duo defeated Jake Jacoby and Josh Silverstein, 6-2mk.

Senior Jared Hiltzik and freshman Pengxuan Jiang earned the clinching win over Robin Haden and Jonas Larsento give the Illini a 1-0 edge over the rival Hawkeyesmk.

No. 11 Hiltzik carried over his doubles-play performance into his singles match with a dominating two-set win over Lefteris Theodoroumk.

The loss dropped Theodorou to 12-6 on the season and 2-2 against nationally-ranked opponents. Hiltzik improved to 13-3 in singles play.

On Sunday, the Illini traveled to Lincoln, Nebraska for an afternoon matchup against the Cornhuskers.

Since joining the Big Ten in the 2011-2012 season, Illinois is undefeated against Nebraska. This time around was no different, as the Illini improved to 5-0 against the Cornhuskersmk.

Nebraska has been an off-and-on team all season. The Cornhuskers are currently on a five-match losing streak, but had a six-match winning streakmk.

With losses to Northwestern on Friday and the Illini Sunday, Nebraska fell to 11-9 on the season and 2-5 in the conferencemk.

The Cornhuskers started off the match on Sunday winning in doubles play. Childers and Page earned the only win for the Illini in the doubles competitionmk.

Illinois heated up in singles competition, as No. 4 Aleks Vukic started off singles play by putting the Illini on the board with a win over Marc Herrmannmk.

Aron Hiltzik followed up his performance on Friday against Iowa with a win over Andrew Dzulynsky, giving Illinois a 2-1 advantagemk.

Courts five and six proved to be two of the more exciting matches on the afternoon, with Asher Hirsch and Page closing out the match for Illinois.

Hirsch defeated Tomislav Antoljak in straight setsmk, while Page went head-to-head with Bradford Zitsch in the first set before pulling away in the secondmk.

Page and Zitsch went into a tie-breaking set, when the Wheaton, Illinois native began to take controlmk.

Page won the tie-breaking set to earn a hard-fought 7-6 first-set win. He then continued to take momentum into the second and final set, winning 6-3mk.

“I knew that if I won, I was going to clinch, but only into the last game,” Page said. “The guy took a medical timeout, so I saw the scoreboard, and that’s kind of how I knew and once I clinched, it felt pretty good. It’s my first time this year clinching a match.”

Since the Purdue match, Page has garnered two wins and held leads in his unfinished matchesmk.

“His energy is a big driving force for our team,” Dancer said. “Today, against Nebraska, he was really a leader for our team with his energy, and he had a lot of fire and played with a lot of passion, so that’s usually the type of stuff that’s usually in his court.”