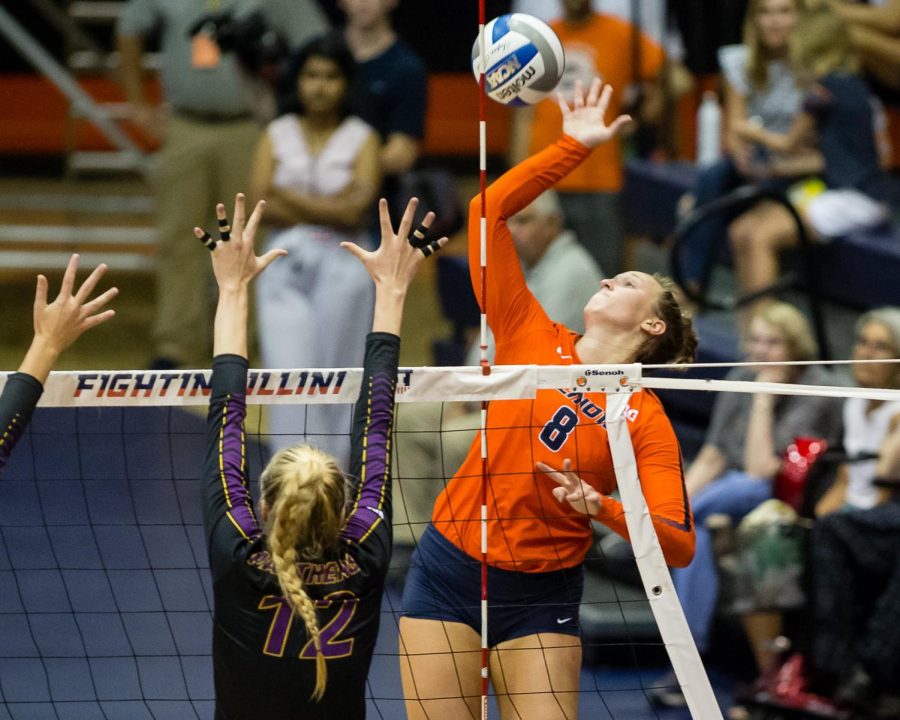 There’s a competition going on between the members of the Illinois volleyball team.

But it’s a friendly one that takes place on another court — the basketball court. Playing basketball happens to be a commonality among a handful of Illini volleyball players. It isn’t unusual, of course, for talented athletes to have skills outside their primary sport — Bo Jackson comes to mind — and a bit of crossover often has its benefits.

“Personal belief here: that cross-training or playing multiple sports is just a good way to become a better athlete because it develops different muscles,” said senior middle blocker Ali Bastianelli. “You just need a different sport, especially in high school, to take away from thinking about volleyball all the time, so I credit basketball a lot to me being the athlete I am today.”

Like many high school athletes with a skill set worthy of Division I competition, Bastianelli eventually had to make a choice between the two sports and focused on playing year-round club volleyball during her sophomore year of high school.

Such a decision proved more difficult for redshirt junior hitter Beth Prince, whose mother, Laura, was a starting center at Eastern Illinois University.

“It was pretty hard for me,” Prince said. “But I just found the joy in volleyball to be a lot of fun … it’s the ultimate team game.”

When they aren’t working together as a team in Huff Hall, it isn’t unusual to find Bastianelli, Prince, Jordyn Poulter and even standout junior Jacqueline Quade playing a pickup game at the recreation centers.

Quade said she would love to take her game to the State Farm Center if she could.

“It would be a lot to do both, but I think it would be super fun,” Quade said. “Basketball is my first love. If the opportunity came up, I’d love to do that, but we’ll see.”

However, Quade making her Division I basketball debut anytime soon remains unlikely, especially considering the busy schedule she and her teammates have during volleyball season.

Even though competitive basketball is something the Illini players left in their pasts, competitiveness certainly isn’t lacking when they play a pickup game. And Bastianelli wasn’t afraid to share who she thinks is the best player out of the team: Beth Prince.