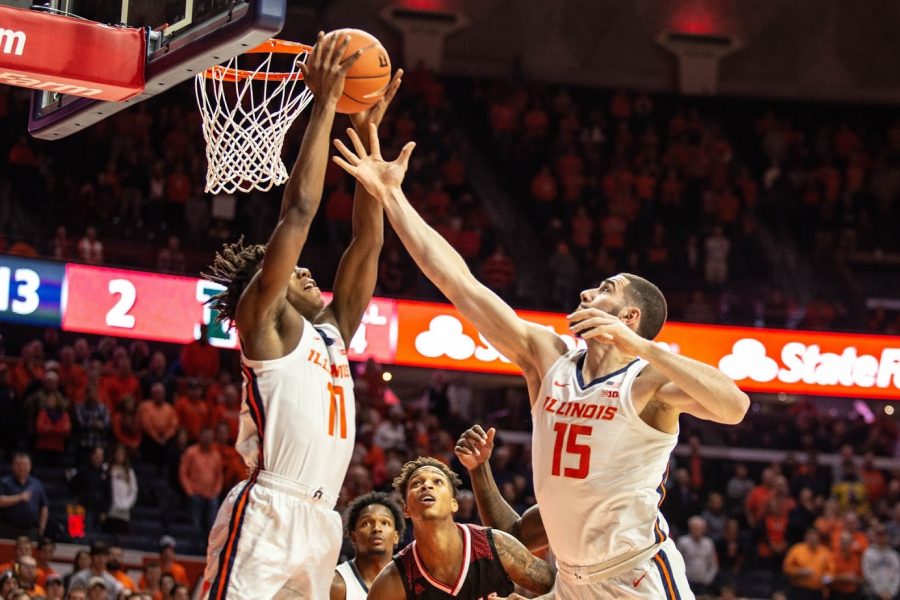 Giorgi Bezhanishvili and Ayo Dosunmu jump for an offensive rebound. Illinois faced Nicholls State at the State Farm Center on Nov. 5 and won 78-70.

After getting blitzed in the second half last Sunday at Arizona, Illinois is looking to bounce back following a week off. The Illini are adjusting to the presence of two big men on the court, and sophomore Giorgi Bezhanishvili is still trying to find his rhythm. Illinois’ struggles thus far stem from turnovers, which are affecting all aspects of its performance. Illinois welcomes Hawaii to town Monday night. The Rainbow Warriors will not be an easy out for the Illini.

After averaging 12.5 points and 5.2 rebounds per game a season ago, Bezhanishvili was primed to be an All-Big Ten candidate heading into his sophomore year. Thus far, however, his production has slowed a bit, as the addition of freshman Kofi Cockburn has pushed Bezhanishvili to the power forward position.

Playing farther from the basket has hurt both Bezhanishvili’s scoring and rebounding numbers, as he’s averaging just 8.7 points and 3.7 rebounds through three games to start the season.

“I think the one thing that Giorgi has done is he’s such a team guy,” said head coach Brad Underwood. “He’s stepped out, he’s shot it great, he’s been shooting the cover off it in practice as well. The biggest challenge for him has been on the glass, going to rebound from out on the floor.”

The sophomore is a good enough shooter to keep defenses honest, which makes playing him at the four feasible, but in order to get the most out of both Bezhanishvili and Cockburn, Underwood may need to stagger the two.

Underwood knows the sophomore is too potent offensively to hold back, and he’s hoping to find the right lineup to accommodate Bezhanishvili as non-conference play rolls on.

“Giorgi’s a proven scorer; Giorgi’s proven he can score no matter who’s defending him,” Underwood said. “We’d be foolish to not take advantage of that.”

Underwood identified two key areas in which the Illini are struggling early on: not finding players open for layups and live-ball turnovers.

In terms of moving the ball, Underwood feels the Illini are “over-dribbling” the ball, becoming too easy to defend in the half-court. To combat those struggles, Underwood wants his team to thread the needle early in the shot clock to keep opponents off balance.

“We’re missing opportunities (for) first cutter layups, things we’ve always done in the past,” Underwood said. “We missed eight of them in the Arizona game, and it’s just simply a guy catching the ball and delivering a pass. We’re predetermining a little bit what we want to do.”

Another area of struggle that is always a concern to any basketball team is limiting turnovers. Known for playing a fast-paced tempo, Underwood’s system will naturally breed more turnovers on average, but the Illini have been especially bad early on, turning the ball over 23 times against Nicholls State, 17 times against Grand Canyon and 22 times at Arizona.

Frequently turning the ball over isn’t just hurting Illinois’ offense, it’s putting the defense in a vulnerable position as well, contributing greatly to the high scoring totals given up though the first three games. Arizona’s Nico Mannion was especially dangerous, pushing the ball up the floor against numbers off of Illinois turnovers.

“When you turn the basketball over, it skews literally every phase of the game,” Underwood said. “We gave up 26 points in transition; it’s pretty hard to be a good defensive team when you can’t contest a layup or (have) a live-ball turnover.”

Underwood is certainly wary of the Rainbow Warriors heading into Monday night, as they are 3-1 so far this season.

“We’ve got a very good Hawaii team coming in here, a team that is 3-1, coming off of a victory in their last game in which they shot the ball extremely well,” Underwood said. “They’re a team that has a very high skill set. They’ve got two wings that shoot the cover off of it.”

Those two wings Underwood is referring to are most likely senior Eddie Stansberry and junior Samuta Avea. Stansberry has been especially effective thus far, averaging 20.0 points per game and shooting 50% from deep, while Avea is second on the team, averaging 12.5 points per game.

The Rainbow Warriors possess good guard scoring and rare height for a mid-major program and should provide the Illini with a solid challenge.

Through three games Illinois has not been impressive, letting two far less superior teams hang around for too long and then crumbling down the stretch against its one solid opponent. There is much to fix, but luckily for Illinois, the competition over the next two weeks should provide ample opportunities to work out the kinks and discover the team’s true identity.