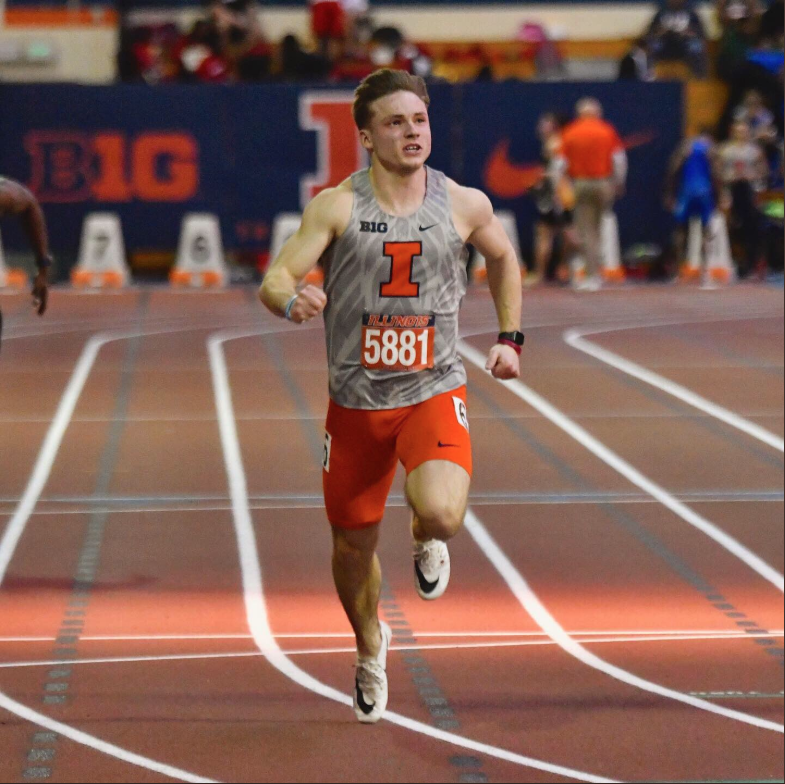 Sophomore sprinter Declan Rustay runs in the 60-meter dash at the Illini Invitational on Jan. 24. Illinois will travel to Nashville for the Music City Invitational on Friday and Saturday.

The men’s track and field team competed at the 2020 Frank Sevigne Husker Invitational at the University of Nebraska this weekend.

Coming into the meet, the Illini were ranked No. 23, according to U.S. Track & Field and Cross-Country Coaches Association. Illinois competed against 38 other teams at the meet, including No. 10 Iowa State and No. 19 Kansas.

On the first day of competition in Lincoln, Nebraska, redshirt senior Jonathan Wells placed first in the long jump event with a leap of 7.66 meters.

He followed up this performance by placing first overall in the High Jump event with a score of 2.14 meters to cap off his two event titles. Freshman Kavin Rajagopal also competed in the event and placed thirteenth with a mark of 1.96 meters.

Rustay and Thormo also ran in the 200-meter race along with junior Jason Shannon, finishing 10th, 18th, and 13th, respectively. Thormo also competed in the 400-meter race during the first day of competitions, where he placed fourth with a time of 47.98.

The Illini also found success in pole vault event where senior Cooper Jazo and Jacob LaRocca finished fifth and ninth, respectively. Both finished with a score of 5.06 meters in the event.

Following the Husker Invitational meet, the team will be traveling to Nashville for the Music City Invitational on Friday and Saturday.

With only a couple weeks away from the Big Ten Track & Field Indoor Championships, the team will look to continue to climb in USTFCCCA rankings.