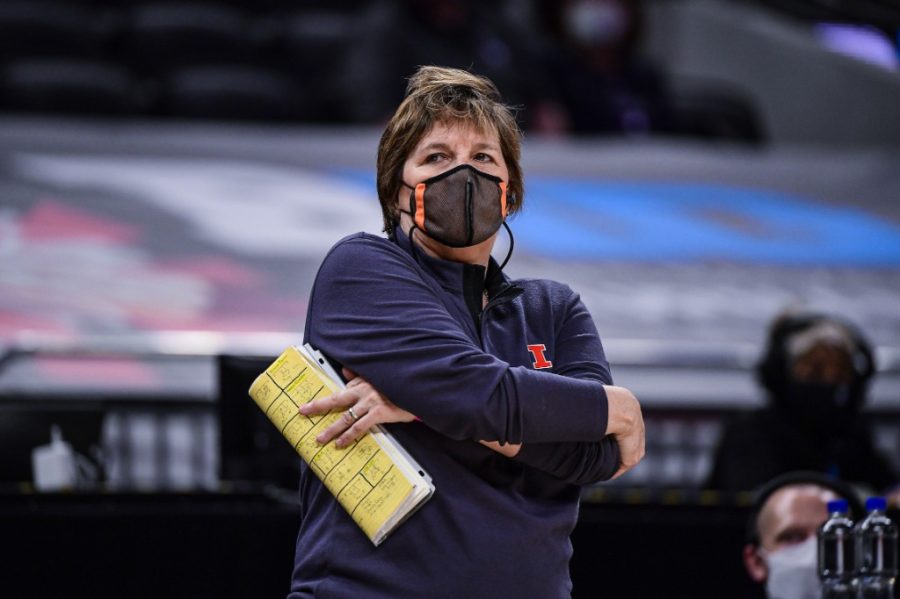 Head Coach Nancy Fahey looks from the sidelines at the gameplay as the team plays in the Big Ten Women’s Basketball Tournament on March 10. Fahey looks for the team to improve offensively.

The Illinois women’s basketball team has seen a lot of changes in the offseason, but fifth-year head coach Nancy Fahey is ready to turn things around.

From last year’s starting five, the Illini have lost two with Kennedi Myles going to Marquette and Jeanae Terry moving east to Purdue.

But, as always, a new season brings in new recruits to add to the ever-changing roster.

It’s only day one of official season practice, but Fahey says that the freshmen are already performing well.

“Jayla Oden is a freshman from Maryland that is probably the quickest and longest point guard that I’ve had since I’ve been here,” Fahey said. “Could really disrupt play, could get through the basket from one end to another and can score.”

Fahey also added that one of the issues that has needed to be resolved is scoring and that Oden has that mentality.

Oden was a three-star recruit out of high school and the No. 33 point guard by ESPN. She also was nominated as a McDonald’s All-American and was a top player hailing from Maryland.

Along with Oden, Fahey mentioned Adalia McKenzie and Keanna Rembart are shooters as well.

“All these kids can score; all these kids are very offensive minded and we can teach defense, but needed to put points on the board,” Fahey said.

With freshmen embracing the mentality to score, Fahey is looking to turn around the scoring struggles the Illini have been plagued with.

“We’re putting a half hour of our first part of practice to shooting, just to make sure that we’re doing game-style, game-type shots,” Fahey said. “When we do drills right now, and we look over at the board and see how many points we’re scoring better. If you don’t see the scoreboard light up, that’s our problem and I think we’re starting to solve that.”

While there have been transfers out of the program, there also have been incoming transfers with seasoned experience.

Sara Anastasieska is coming into her seventh year of college basketball after spending time at UTSA, Cal-Berkeley and Duke. Although Anastasieska occasionally gets called “grandma” by her teammates, Fahey says the character she has brought into the locker room was needed.

De’Myla Brown is coming in as a junior college transfer from Chipola College, where she helped lead the team to a final four appearance and was named an NJCAA first team All-American as a sophomore.

For Kendall Bostic, the Big Ten is nothing new to her, as she has already played a season at Michigan State.

Fahey also mentions the abilities that Bostic, Anastasieska and Rembart bring are going to help in the four spot offensively.

Even on the coaching side, Illinois has seen changes once again. Fahey brought in both Corry Irvin and Hernando Planells as assistant coaches.

“What we’re trying to do offensively, we need someone to stretch the four and hit those outside shots and rebound, and that combination … will kind of give us that combination we’re looking for,” Fahey said.

When it comes to Irvin, Fahey says she has a successful history as a coach at Whitney Young Magnet High School in Chicago and was a winner at St. Xavier University.

“That has made an immediate impact on our recruiting already, and the knowledge she has is not just from recruiting and is confined to the state of Illinois,” Fahey said. “She has a perspective that is unique, that has really helped us draw some, not only regional, but national ties in recruiting.”

As for Planells, he was a head coach at William Jessup University and, before that, was an integral part of the Duke women’s basketball team during his seven-year tenure as an associate head coach.

“He’s also added a nice dimension to our recruiting process,” Fahey said when talking about Irvin and Planells.

Illinois will open its season on Tuesday, Nov. 9, against North Carolina Central at State Farm Center.