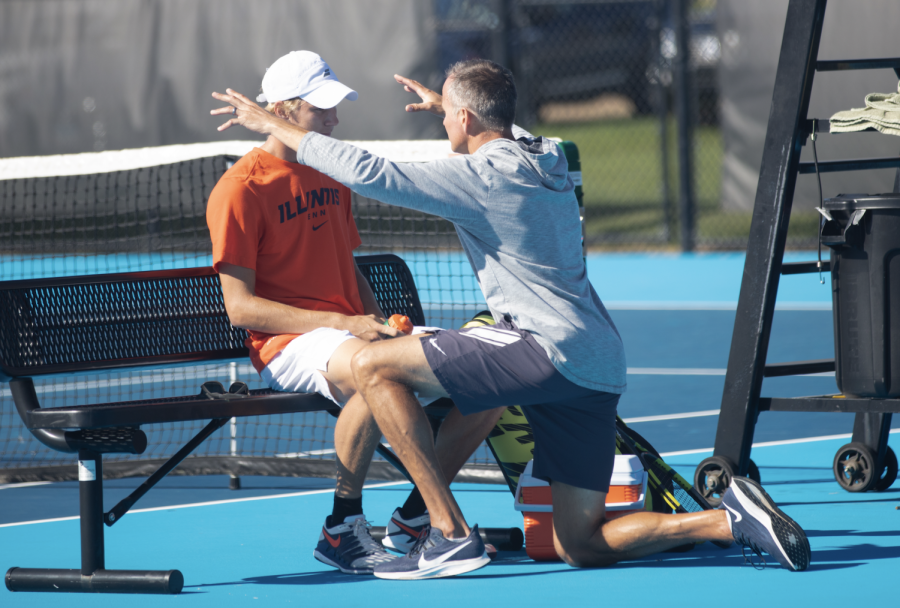 After a hectic weekend of matches for the Illini, the team will now turn its head toward East Lansing, Michigan, where they will be competing in the ITA Midwest Regionals tournament.

The tournament consists of 171 players from various schools across the Midwest who will compete in doubles and singles play in order to qualify for the ITA National Fall Championships in November. Of the 171 players registered, the Illinois roster makes up nine of the players.

Entering the weekend, the Illini are coming off of back-to-back losses to Tennessee and Middle Tennessee State. If the players want to bounce back from their recent defeats at the weekend, they must look to play with the same intensity they would play with during conference play later in the season. Head coach Brad Dancer spoke about his players’ mindset going into this weekend, touching on the importance of every single match.

“All of these matches count for the guys individually, so for them you know it matters just as much for them and their individual stuff as it does for the team later on,” Dancer said. “They are playing with their college rankings and college All-American titles and all of those things on the line, so they care, and it really counts.”

The Illini are no strangers to success at the ITA Midwest Regionals, with alumni Aleks Kovacevic winning the singles competition just three years ago. The last time the Illini saw action in the ITA Midwest Regionals was in fall of 2019, which had four Illini make deep runs in the singles competition as well. This year, the whole roster will be competing in East Lansing and will look to replicate the recent successes of the program.

ITA Midwest Regionals will serve as a great chance for the team to gain some needed momentum before the Big Ten singles championships in a few weeks. After last weekend’s Fighting Illini Invite, Dancer was upfront about the team’s level of play with important tournaments on the horizon.

“Hopefully this weekend shows us where we need to be,” Dancer said after Sunday’s match against the Blue Raiders. “We just have to find ways to win and improve across the board.”

The action will begin Thursday morning in the round of 256, where the Illini will look to take what they have learned from the past weekend of matches and apply it when it matters.