Illinois football travels to Penn State, looks to pull off monumental upset away from Champaign 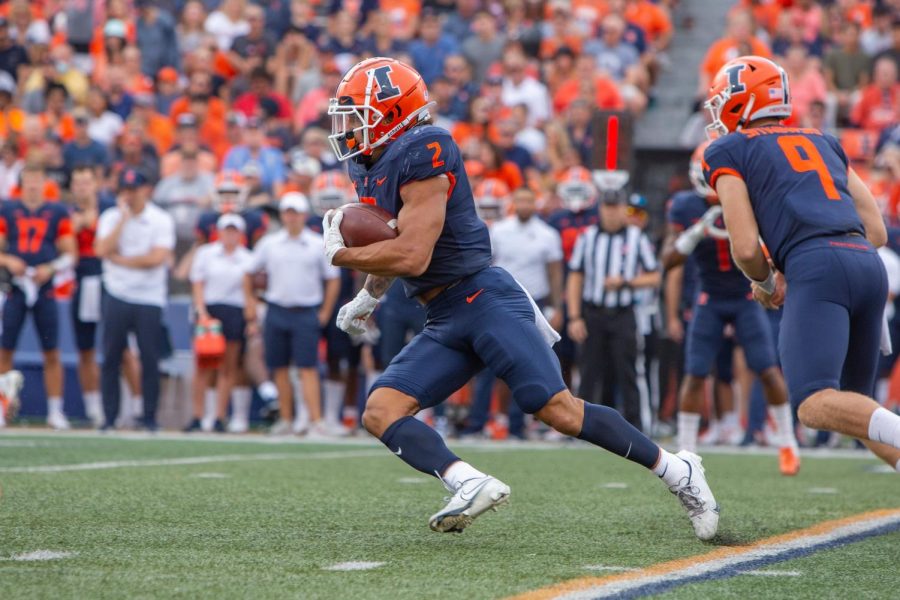 Running back Chase Brown sprints with the ball during the game against Wisconsin Oct. 9. Illinois football travels to Penn State this Saturday in hopes of a monumental victory.

This Saturday, Illinois football will travel to University Park, Pennsylvania, to take on No. 7 Penn State at 11 a.m. in the Nittany Lions’ Homecoming Game.

Penn State is 5-1 on the season, with its one loss coming to No. 3 Iowa, so Illinois will have a large challenge in store for if it wants a chance in this game. Conversely, Illinois is 2-5 and coming off a bye week after being shut out 24-0 against Wisconsin on Oct. 9.

The largest question when looking at the matchup will be the uncertainty at the starting quarterback position for both teams. In Penn State’s case, long time starter Sean Clifford suffered an injury last week against Iowa, and his status is currently unclear for the weekend’s matchup. Penn State’s backup options are sophomore Ta’Quan Roberson and Christian Veilleux.

Roberson was the team’s backup last week and filled in for Clifford after his injury, going 7-for-21 with two interceptions. Given the performance, Veilleux may have a chance to leap into the starting role if Clifford can’t play.

Illinois has its own set of quarterback issues, however, as game one starter Brandon Peters went down with an injury during the loss to Wisconsin and had not been cleared for practice as of Tuesday, according to head coach Bret Bielema. Illinois’ primary backup, Artur Sitkowski, filled in for Peters after his injury. He opened without a connection on his first 12 passes before finishing 8-for-27 with 55 yards.

According to Bielema, the call at quarterback will largely be a function of how quickly Peters can make it back to practice. Bielema said Peters would need to practice for a good portion of the week to be up to date on the game plan in order for him to get the starting nod.

Quarterbacks aside, Penn State presents a colossal challenge on both sides of the ball. The Nittany Lions rank as the number one scoring defense in the Big Ten, including allowing just 110.3 rushing yards per game and 201.3 passing yards per game.

Last game, Illinois mustered just 26 rushing yards and 67 passing yards against a similarly elite Wisconsin defense. If Illinois wants a chance, the Illini will need to make adjustments to get at least one phase of their offense going strong.

“I would say during the bye week, we’ve made some roster changes,” Bielema said. “There will be position changes that you’ll see Saturday in the game that is just constant maintenance of your depth chart and your roster and make that better. Some of those have been in the freshman class.”

Illinois’ defense also had a rough showing against Wisconsin, as it gave up 491 yards of total offense. Fortunately for Illinois, Penn State has a relatively pedestrian rushing offense, ranking 11th in the Big Ten at just 128.3 rushing yards per game. Their passing offense is where they are more elite, averaging 268.3 yards per game, but that could look different depending on who starts at quarterback.

Bielema took the bye week to reassess the roster and detailed some of what he learned in his weekly press conference.

“The roster is going to have to change to get to where we want to get to win a championship,” Bielema said. “I recognized that probably halfway through the spring last year, through the summer. Certain positions haven’t played out the way they had envisioned them to, particularly the offensive line. I don’t think we have a player in the two-deep that they’ve recruited in the last two years that is significantly doing anything for us in the playing department, and that is a major concern. That’s something that we have to do. The top two quarterbacks that have played to this point are both transfers, so there hasn’t been any development at that position that is significantly playing right now.”

For the time being, Illinois will walk forward with the current roster — whether Bielema recruited them or not — and look to pull off what would be a monumental upset this weekend.