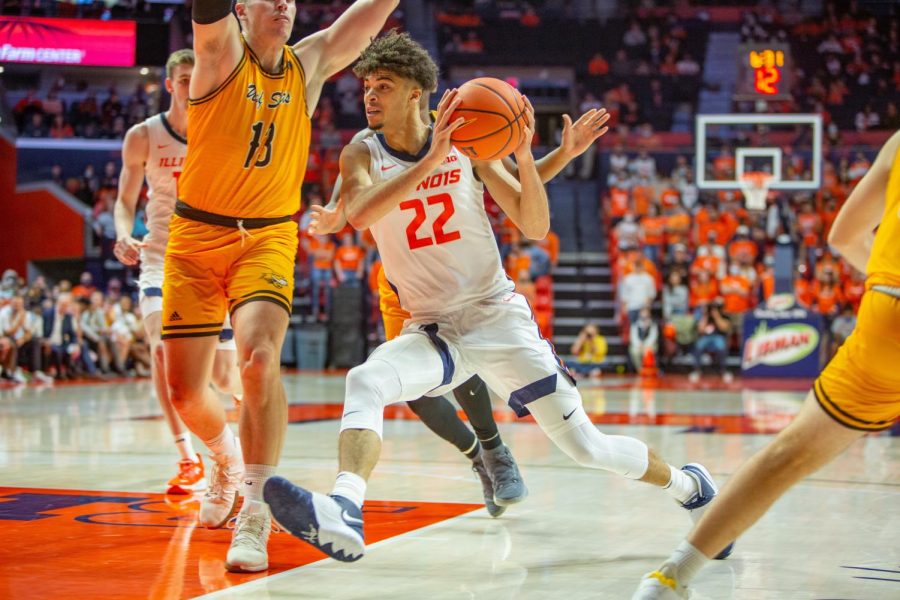 Austin Hutcherson drives to the rim during the second half of the game against St. Francis (Ill.) at State Farm Center on Saturday night. Hutcherson stood out in his Illinois debut, recording 14 points and seven rebounds in the 101-34 win.

Illinois opened its 2021-2022 preseason slate with a resounding 101-34 win over St. Francis ahead of the team’s regular-season opener against Jackson State on Nov. 9.

With several changes, both with the coaching staff and roster, the Illini had no trouble on both offense and defense, with all 14 players getting minutes on Saturday. Illinois shot 58.2% while forcing 16 steals and notching nine blocks.

Six different players made their debuts, while four sophomores played in front of a crowd at State Farm Center for the first time after playing in front of empty seats last season.

The Wesleyan transfer brought the energy and intensity despite last seeing game time over two years ago after sitting out the 2019 season per NCAA transfer rules and missing the 2020 season due to injury, playing 21 minutes in the blowout win.

Hutcherson converted his first five field goals before finishing 5/7 with 14 points and seven rebounds. On the defensive end, the New York native made two steals, and head coach Brad Underwood acknowledged his effort in his Illinois debut.

“I wasn’t sure what I would expect,” Underwood said. “I used the term, ‘Kick the rust off,’ and he did that pretty well tonight. I think we saw his explosiveness, his athleticism. … Great first step, and now he hopefully has got some confidence.”

While Hutcherson stood out, Plummer’s impact wasn’t as significant, though he finished with four points on 50% shooting while getting 20 minutes.

Known for his 3-point shooting, the Utah transfer missed his two attempts from behind the arc, though he brought the intensity on defense despite not registering any steals or blocks.

The former Florida center may not have been at his best on Saturday night, he notched four points while shooting 50% from the field. Underwood could tell Payne was a bit shaky in his first game in Champaign.

“I think he was a little nervous getting out there and running up and down again,” Underwood said. “I think tonight was just about getting comfortable, getting him dialed in on the defensive side.”

Payne had two blocks on the defensive end, though he only saw eight minutes of game time.

Though he was the last freshman to enter the game, the Puerto Rico native made an immediate impact as soon as he stepped on the court, grabbing an offensive rebound following a missed field goal before finishing the contested putback five seconds after stepping onto the court.

Melendez played 11 minutes, all of which came in the second half, and finished with nine points while going 4/6 on field-goal attempts, including 1/3 from beyond the 3-point line.

Opposed to Melendez, Goode was the first freshman to make their college debut, entering just under eight minutes into the game. Four minutes later, the Indiana native scored his first points on a contested layup on his lone shot attempt of the night.

Goode grabbed three rebounds and registered an assist in the win while playing 15 minutes.

The Wisconsin native saw 13 minutes of action, scoring his lone three points on a trey to send the Illini over 100 points on the night. He went 1/3 from the field while attempting two triples.

Podziemski also registered two rebounds and two assists, as Underwood looked eager to get all his freshmen ample playing time to shake off the nerves of playing in front of a packed State Farm Center crowd and a raucous Orange Krush section for the first time.

Illinois returns to action on Friday in its second and final exhibition match of the preseason against Indiana University of Pennsylvania.