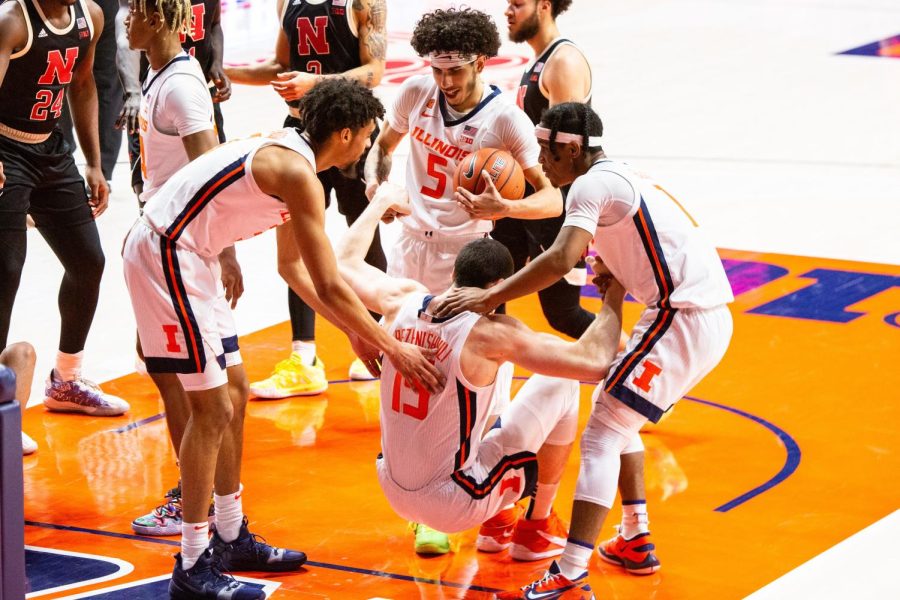 It’s been 594 days since the Illini played a game in State Farm Center with fans in attendance. Many students on campus have never had the opportunity to watch Brad Underwood’s squad play in person, but that all changes tonight.

The Illini face off against the University of St. Francis in an exhibition at 8 p.m. This will be the first meeting between the teams in school history.

Expectations are high for the Illini. Junior Kofi Cockburn and sophomore Andre Curbelo were both named preseason all-Americans. Additionally, the duo were selected for the Kareem Abdul-Jabbar and Bob Cousy awards, respectively. With so much change since the team’s last game with fans, Underwood is not taking this exhibition lightly.

“We’ve got five guys: Curbelo, Coleman, Brandon Lieb, … six guys actually and three freshman that have never been in this building with the lights on and with people in the stands,” Underwood said. “It’s one of the reasons I moved to two exhibition games, to get those guys acclimated to that.”

Underwood said St. Francis will be a good test of the Illini’s principles, partly because the Saints’ roster is full of good shooters but also due to the diversity of actions the team runs on offense.

The Illini open the season with very little set in terms of lineups and a ton of player combinations to evaluate. Underwood said he plans to evaluate sophomore Coleman Hawkins at center and even run small-ball lineups with “the three little guys:” Andre Curbelo, Trent Fraizer and Alfonso Plummer.

“We’re gonna play a lot of guys; there’s no doubt about that,” Underwood said. “I’m gonna look at some different combinations. It’s a great learning opportunity for us as coaches, to see what these guys do and how they react to the bright lights.”

The Illini should face much resistance against the Saints if they look to live up to preseason rankings that have them among the best teams in the nation. St. Francis won 14 games out 24 total last season and lost in the first round of the Chicagoland Collegiate Athletics Conference tournament.

The end of last season was a disappointment to say the least, and fans and players alike felt let down by a season that ended too soon. For Underwood, the loss was not the worst of it.

“It was eerie walking out there before the games: no fans, no Orange Krush, no pop.” Underwood said. “I think that we did take them for granted; shame on us. Fans make college basketball. … The saddest thing about last year for me was not the end; it was that our fans didn’t get to enjoy that team and see how much fun they had and how together they were.”