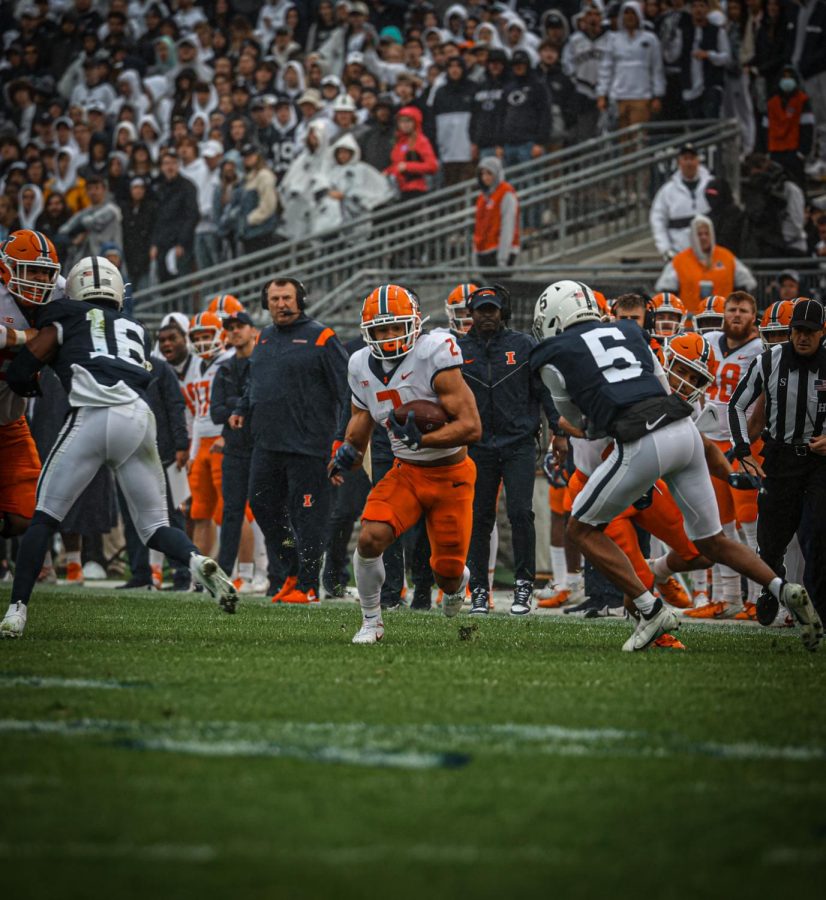 Illinois running back Chase Brown carries the ball during the first half of the game against Penn State at Beaver Stadium on Saturday.

Illinois football defeated Penn State, 20-18, during the No. 7 Nittany Lions’ Homecoming game on Saturday afternoon after regulation and a historic nine overtime periods.

The lengthy football game was highlighted by an elite Illinois running game, with Chase Brown and Josh McCray registering 223 and 142 rushing yards, respectively.

Illinois opened the game looking drastically different than it did in their last matchup, starting with a 9-yard Chase Brown rush, a 16-yard pass interference call and an 18-yard Chase Brown run on the first three plays of the game. But, quarterback Artur Sitkowski, who was given the start over Brandon Peters, threw an interception on the next play and gave up what would turn out to be a precious scoring opportunity.

From there, the Illinois defense found a way to clamp up, forcing a pair of short drives and punts from Penn State as the Illini offense stalled when they had the ball as well. Penn State ultimately found a way to strike first on the back of a 36-yard pass to Jahan Dotson and a 42-yard touchdown pass to KeAndre Lambert-Smith.

Illinois continued to struggle offensively, with the only bright spot being a pair of short runs by Brown that yielded eight and three yards, respectively. On the next play, Sitkowski was sacked and fumbled, giving Penn State the football in Illinois territory.

Penn State leveraged its position, quickly getting into the red zone on a 19-yard pass to Brenton Strange. Ultimately, Illinois found a way to stifle the Penn State offense and held the Nittany Lions to a field goal to go down 10-0.

At this point, the Illinois offense finally seemed to find a grove. Sitkowski was able to convert a first down via a 6-yard rush and a 5-yard pass to Daniel Barker, and then the Illini running backs began to take over. Chase Brown took off for a 4-yard carry, followed by a 27-yard rush that finally put Illinois back into Penn State territory. From that point, Brown and Josh McCray traded runs until Illinois pounded the ball into the end zone on a 1-yard rush by Brown.

The touchdown drive took over eight minutes, leaving just a few minutes in the half in which Illinois and Penn State traded punts. This left Illinois down 10-7 going into the half.

Illinois forced a punt on Penn State’s first drive of the second half. On offense, however, Sitkowski was sacked and fumbled again, giving Penn State the ball at the Illinois 22-yard line. The Illinois defense stepped up once again, keping Penn State without gaining any yardage before a 40-yard field goal attempt that missed.

On offense, Illinois once again seemed to find momentum on the back of a 28-yard Josh McCray run that put the Illini at midfield. Illinois found itself with a first-and-10 at the Penn State 34-yard line after a pass interference penalty, but was held without a first down from that point forward. The Illini ended up attempting a 50-yard field goal, which kicker James McCourt missed.

The Illinois defense continued to stymie Penn State’s offense, giving the Nittany Lions just one first down before forcing another punt. At this point, the Illini found more magic and built a drive that went into the red zone, but the game devolved into a flurry of penalties. Illinois had two different touchdowns called back, while Penn State had a facemask penalty themselves. In the end, Illinois settled for a field goal that tied the game at 10.

Illinois yet again forced a punt, giving Penn State the ball with about eight minutes left in the fourth quarter. The offense then proceeded to stall and Illinois punted. Penn State also continued to fail to get much yardage on offense, so they punted and gave the Illini the ball with half a minute left. Ultimately, Illinois couldn’t get far enough down the field in time so the game went to overtime.

Penn State was again held to a field goal themselves, sending the game into a third overtime. Penn State failed to convert on its first two-point conversion attempt on a trick play in which quarterback Sean Clifford failed to catch the football. Illinois continued to mirror Penn State, with a pass just falling off the tip of McCray’s hands.

Sitkowski came up empty on a pass attempt to start the fourth overtime and also went down with an injury on the play. Penn State continued to be held without a successful attempt, sending the game to a fifth overtime.

“There was a key moment when Art was on the ground over there,” said head coach Bret Bielema on Sitkowski’s injury. “Our guys knew that he had been hurt. You could feel a kind of momentum, and I remember I just ran out in the huddle and said, ‘Hey, one play! One play!’ And our coaches started running and made it happen.”

Penn State’s run attempt was stopped at the line of scrimmage, giving Illinois yet another attempt to win the game. Peters came in for an injured Sitkowski, but his first pass attempt was no good.

The sixth overtime opened with Peters overthrowing the end zone. Penn State went for a shovel pass on their attempt, but Illinois held them at the 1-yard line to send the barn burner of a game into a seventh overtime.

Penn State’s running attempt was then held just short of the end zone, affording Illinois yet another opportunity to win the game. Josh McCray was held behind the line of scrimmage, sending the game into an eighth overtime.

Illinois finally found the end zone with Isaiah WIlliams, but Penn State was able to respond and scored as well, forcing a ninth overtime.

“The greatest thing I saw today was Isaiah Williams do everything he could to get in that end zone,” Bielema said. “Probably the littlest guy on the field in that big moment, but he played as big as anybody out there. And those kinds of things make it real.”

Penn State came up empty on their next pass attempt. Finally, Peters found the end zone and converted the two-point conversion for the upset win.

“We’re not where we need to be, but I love the attitude, the enthusiasm,” Bielema said. “The energy is just boundless, and they fight for each other. If there’s one thing that’s really come out it’s just how much they fight for each other. When one guy goes down, the other guy steps in. Believe me, they care for him and they love him. I saw those guys come over to (Vederian) Lowe when he was laying in pain, but they also were patting Pihlstrom on the butt and said, ‘Let’s go do this.’

“So, I give a lot of credit to our leadership, our captains. All the things they’ve done before I got here and all the growth since I’ve arrived.”