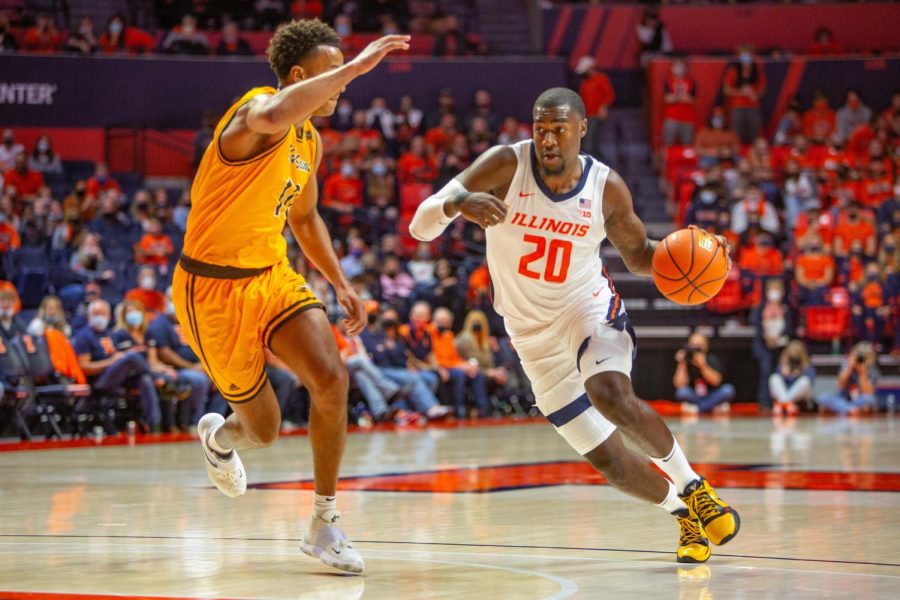 Illinois guard Da’Monte Williams drives to the basket during the team’s game against St. Francis (Ill.) at State Farm Center on Saturday. The Illini won the game in dominant fashion, 101-34.

The Illini cruised to a 101-34 victory against St. Francis, showing why they are ranked so highly to start the season. Senior Trent Fraizer led the way with 10 points, three assists and a whopping six steals.

“I kept telling them, ‘I thought I lost it a little bit, I’m old now. Every time I step out there I feel like I’m 30,” Frazier said. “Apparently I still have it, though. … We have a lot of guys that can do what I do; it’s just about wanting to do it.”

They were dominant on both sides of the ball in the first half. After scoring just six points in the first five minutes, the Illini got hot. A big run put them up by 12, and the lead would never be as small again.

Sophomore Andre Curbelo struggled early on, starting the game with a missed jumper and turnover. However, he finished strong and stole the show with a few flashy passes, including a bowling ball-like skip pass from half court to Austin Hutcherson, who finished the break.

“To be honest, I thought we had some nerves at the beginning,” said head coach Brad Underwood. “’Belo was pretty nervous; he’s never played a game here with fans, but he’s gonna be OK. He’s gonna be the head of the snake a lot of nights, and a damn good one.”

Junior Kofi Cockburn played limited minutes but punished the Saints efficiently while on the court. Cockburn finished the game with 14 points, six rebounds and a block in under 15 minutes.

“Kofi gets it, man. Kofi’s matured so much since he’s been here,” Underwood said. “He was excited for tonight. That guy is doing as much coaching and cheerleading. He loves this place, he loves his teammates and he knows how much the Illinois fan base loves him as well.”

Senior Austin Hutcherson flashed the skills Illini fans have been waiting to see from him for two years. Hutcherson checked in early in the first half and ended the game tied with Cockburn for the game high with 14 points.

Hutcherson was 5/7 from the field and made two of three 3-point attempts. He also added seven rebounds, two steals and finished the game with a team high +39.

It was far from a nail-biter, but the highlights were top notch. Cockburn had some memorable moments, including hitting an open 15-footer that got the bench out of their seats and sent the crowd into a frenzy, as St. Francis called for a timeout.

The biggest ovation of the night came when Fraizer recorded his fifth steal of the first half and dished it to sophomore Coleman Hawkins, who slammed it on the break with just three seconds left on the clock. Hawkins would finish the game with 13 points, five rebounds and two blocks.

Despite the win, Underwood is not satisfied where many would see perfection, and he see room for improvement.

“Our new guys weren’t even close to being ready,” Underwood said. “They’ve got a long way to go. That’s one of the challenges; it’s a long season. We’ll have 110 to 120 practices, and these guys are gonna get good.”