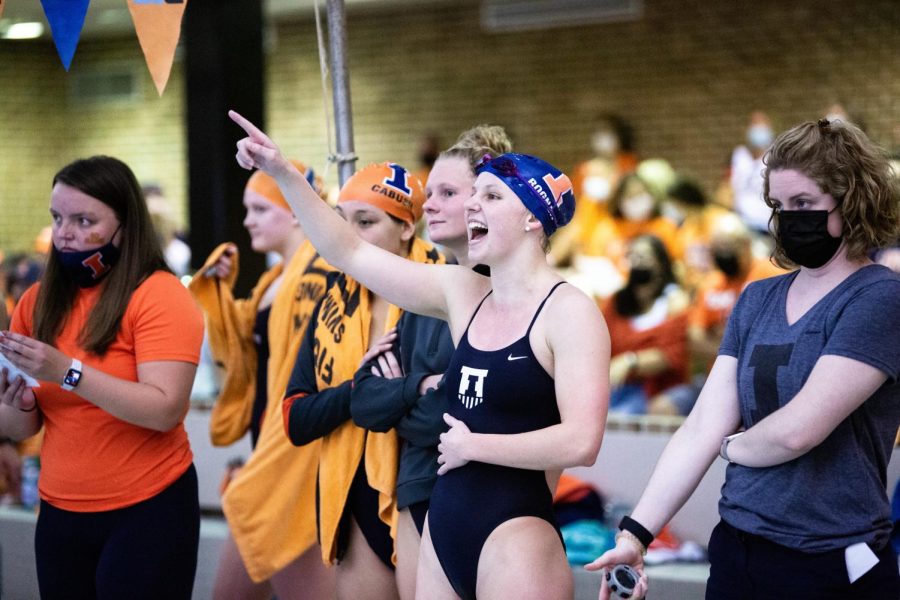 Sophomore Cara Bognar cheers on her teammates during the Orange and Blue meet at the ARC Oct. 9. The Illinois women’s swim & dive team went 2-1 after facing off in a tri-meet against Northwestern and UIC.

The Illinois women’s swim & dive team goes 2-1 on the season after facing off in a tri-meet against the Northwestern Wildcats and University of Illinois at Chicago Flames at Northwestern’s Norris Aquatic Center.

After a strong start against Indiana State and while knowing the adversity that lay ahead, the Illini were all smiles heading up to Evanston, Illinois.

“Definitely a lot of nervousness going in, but we try to just subdue that as much as possible,” said sophomore Lily Olson. “We were able to keep a really positive attitude, even coming in knowing that Northwestern is a tough team.”

The Illini made a splash early, with a third place finish in the 200-yard medley relay by Olson, juniors Divya Kale and Athena Salafatinos, and senior Abby Cabush. The Illini kept battling it out as shortly after, Cabush won the 200-yard freestyle, giving the team more energy.

“A lot of close finishes, so it was nice to see them go toe-to-toe and not back down and just challenge themselves,” said head coach Sue Novitsky. “That’s what we want them to keep doing, go out there and not put limits on themselves.”

The Illini finished the meet strong, staying competitive till the end. Throughout most of the meet, the top positions would consistently include Wildcat and Illini swimmers while the Flames never placed in the top three in any of the events.

The Illini gave the Wildcats a run for their money but in the end, the Illini split the meet, beating the Flames (230-70) but falling to the Wildcats (197-99). The loss doesn’t put a damper on Illinois’ spirit and momentum as they saw the positives in their performance.

“We were definitely the loudest team on the pool deck,” Olson said. “We are always winning in our attitude, so that’s something that I’m very proud of.”

This constant positive attitude has been key in the Illini’s success this far, as it will for the rest of the season. The self-proclaimed loudest and most supportive team is looking to not back down to anyone and just keep swimming.

“The coaching staff will go back and look at the results, really focusing on the things that keep popping up, change some habits and make some things a bit better,” Novitsky said. “We want to see how they respond when things aren’t necessarily going to be easy or smooth, but they still need to step up and compete no matter what the situation is.”

The Illini head south for their next tri-meet against the Illinois State Redbirds and Southern Illinois University Salukis on Oct. 29 in Carbondale, Illinois. Then, on Oct. 30, they head to Nashville, Tennessee to compete against the Vanderbilt University Commodores.