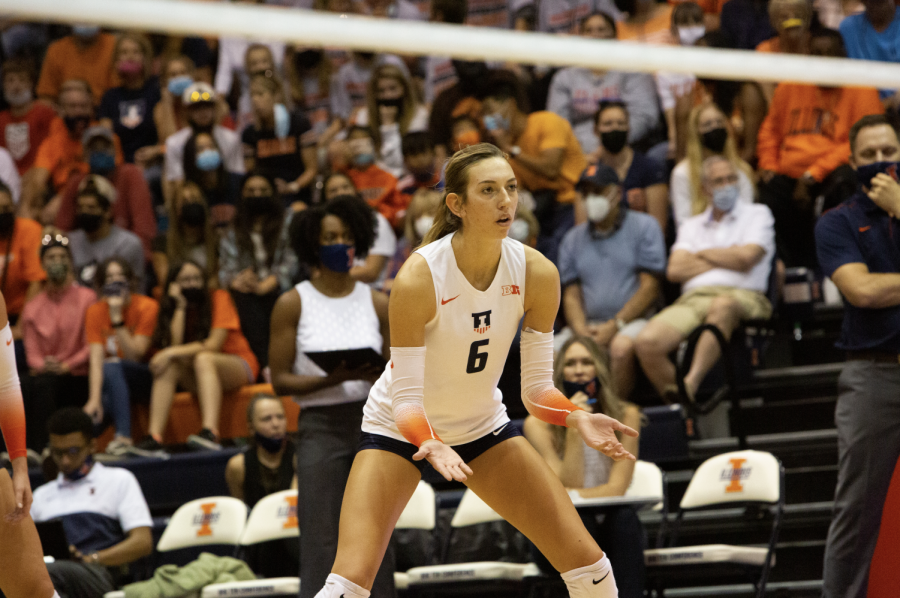 Middle blocker Kylie Swanson readies herself during the game against Wisconsin Oct. 3. The team will take on Michigan at Huff Hall this Saturday for the first time in two years.

Illinois returns to Huff Hall on Saturday to take on Michigan, a team the Illini haven’t played in nearly two years.

“Sometimes I think it’s an advantage to go in without really any expectations; you just step onto the court and give it your best,” said junior middle blocker Kyla Swanson. “I think we’ll be prepared for them, and it’ll be a fun competition.”

The Illini enter the matchup coming off a four-set win over the Northwestern Wildcats in Evanston. After falling in the first set, Illinois bounced back to win the next three sets and complete the regular-season sweep over its in-state rival.

Michigan heads to Champaign after beating Indiana in straight sets on the road on Wednesday night. The Wolverines sit at 12-6 on the season and 5-4 in conference play, while the Illini are 13-7 with an identical 5-4 Big Ten record.

Both teams have pulled off big five-set upsets this season, with Illinois beating No. 4 Purdue in West Lafayette on Oct. 1, while Michigan beat No. 8 Minnesota on Oct. 8.

The two teams haven’t played since the 2019 season when Michigan won both matchups 3-1. But a lot has changed since then, as Jacqueline Quade, Ashlyn Fleming and Beth Prince were still playing in Champaign at that point.

“I think we just have to prepare more for them just because we haven’t seen them in two years, but at the end of the day it comes down to our game,” said junior middle blocker Kennedy Collins. “We still have to play the same game we always do.”

Offensively, the Wolverines are led by sophomore outside hitter Jess Mruzik and senior outside hitter Paige Jones, who have registered 229 and 201 kills, respectively, through 18 matches this season. Middle blockers Jacque Boney, Jess Robinson and May Pertofsky are dangerous at the net, as all three players have notched at least 60 total blocks this season.

Though Illinois leads the conference with 1.88 service aces per set, Michigan junior opposite hitter/middle blocker Pertofsky ranks tied for first in the Big Ten individually with 0.54 aces per set. Illinois’ Raina Terry (0.42), Megan Cooney (0.36) and Taylor Kuper (0.36) also rank among the top 10 in the conference in the statistical category.

Illinois looks to beat Michigan for the first time since 2018, with the match starting at 3 p.m. at Huff Hall in Champaign.

“We’ve always played them tough; they’ve always played us tough,” said head coach Chris Tamas. “We always seem to be in four- and five-set battles every single time we play them, so I’m looking forward to another battle.”