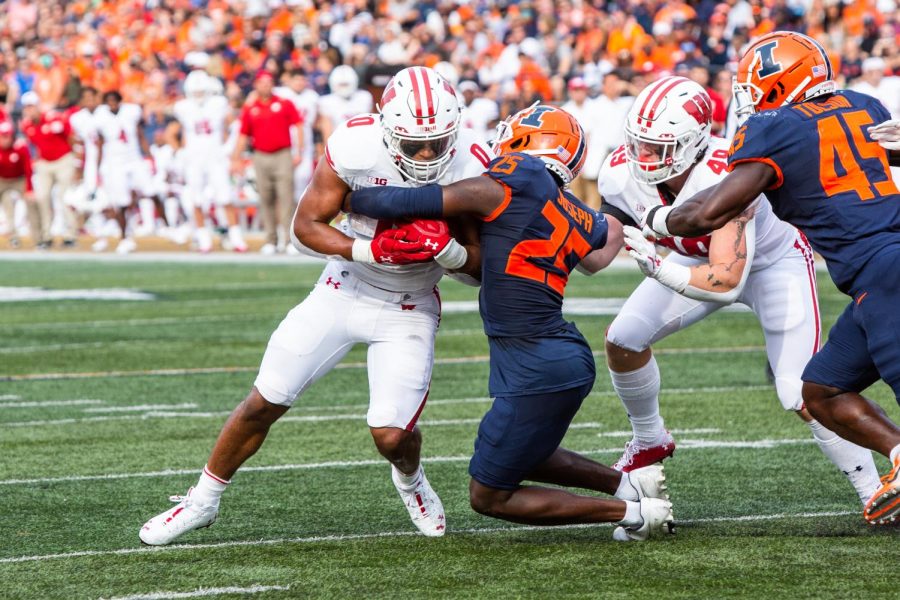 Defensive back Kerby Joseph attempts to block a Wisconsin player during the game Oct. 9. The Daily Illini sports staff makes predictions ahead of the teams game against Penn State this weekend.

The Illini will not leave Happy Valley very happy on Saturday.

Given how wildly inconsistent the offense has been this season, I don’t see Illinois putting up much of a fight this week. After racking up less than 100 yards of total offense against Wisconsin two weeks ago, the Illini head to Beaver Stadium to take on a talented Nittany Lions defense that allows the fewest points per game in the Big Ten.

Both Artur Sitkowski and Brandon Peters looked subpar against the Badgers, and they went a combined 11-for-34 and 67 yards. Penn State’s defense is probably better than Wisconsin’s, so Illinois will need drastic improvement from whoever winds up playing under center on Saturday.

I’d take Penn State winning, 34-14. Illinois is coming off a bye week and has ample time to prepare, but at Tuesday’s press conference, head coach Bret Bielema still wasn’t sure who’d start at quarterback in light of game one QB1 Brandon Peters’ injury.

Penn State has an elite defense, with their only potential weakness being if starting quarterback Sean Clifford can’t go due to his own injury. Prior to the bye week, Illinois lost 24-0 to Wisconsin. To put Penn State into perspective, the Nittany Lions beat that same Wisconsin team earlier in the year. They’re ranked seventh in the country for a reason, and it’s their Homecoming Game, so it’s hard to imagine Illinois putting up much of a fight in this matchup. If Bielema can find a way, however, this could become a statement game.

After a bye week, Illinois is back on the road, and this time it’s against the Penn State Nittany Lions. Illinois come into this matchup sitting at 2-5, while the No. 7 Nittany Lions are 5-1.

As much as I’d love to make a case for an upset win at Beaver Stadium, it’s simply not in the books for the Illini. Although Penn State does have question marks about who will be at quarterback, its team’s overall talent will be too much to handle for Illinois.

Penn State boasts one of the best atmospheres in college football as well, so expect a run-heavy offense for Illinois, without a lot of bright spots.

If you believe that Illinois can beat Penn State on Saturday, I have a magic bag of beans to sell you.

Beating the Nittany Lions on the road would honestly be the most shocking Illini football result in a generation, as Illinois is playing with a Rutgers transfer quarterback and wide receivers who are converted quarterbacks. I’m more concerned about how the defense looks compared to last season’s result.

Penn State, despite being 4-5 last season, blasted Illinois by hanging 56 points on the board in the December meeting. Now, with no Jake Hansen, Illinois officially enters a new era, and I’m counting on Ryan Walters to fix the Illini’s biggest issue under the Lovie Smith era: not being able to win without forcing multiple turnovers.

Penn State’s offense has been far from lethal, as it averages less than 400 yards a game. Add in that the Nittany Lions only average 128 yards on the ground, the key for the Illini will be to force pressure on quarterback Sean Clifford, which would eliminate his time in the pocket. No matter how good the cornerbacks are — and the Illini’s aren’t spectacular — a wide receiver will eventually be open if the quarterback has a clean pocket.

I say the Illini defense — which has performed well in conference play — delivers quite a performance, holding the Nittany Lions under its season average of points per game. However, with the current makeup of the Illini offense, a moral victory is the only thing Bielema will be able to cling to.

Illinois is set to take on No. 7 Penn State this weekend. The Nittany Lions enter the game coming off a loss against Iowa, while the Illini were shut out by Wisconsin on Oct. 9.

Penn State is stronger than Illinois in basically every statistical category and is heavily favored to win. I think Illinois is likely to leave State College without a victory.