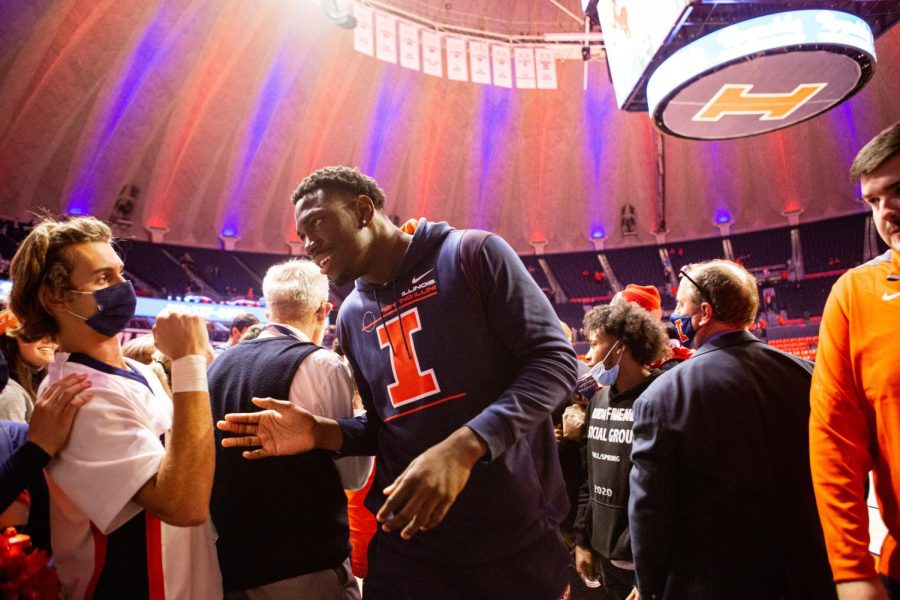 Kofi Cockburn high fives a fan after watching the Illinois game against Jacksonville State University on Nov. 9. Illini basketball still faces setbacks despite the end of his suspension.

Illini fans should and will be happy this week, as star center and National Player Of the Year candidate Kofi Cockburn has completed his three-game suspension and will play in their next game on Monday against Cincinnati.

With Illinois coming off a meltdown loss at Marquette, Cockburn is expected to return and immediately spark the team. But I want to look first at what went so wrong in the Illini’s first real contest of the year, which resulted in a one-point loss to the Golden Eagles after leading by double digits in the second half.

There were two blatantly obvious issues with Illinois’ performance, and honestly, I’m not 100% sure which one is more concerning. Was it the 26 turnovers, seven of which were by someone who is supposed to be one of the best point guards in the country, or was it struggling to score and shoot the ball against a team that isn’t supposed to be even close to making the tournament? Take your pick.

I’ll take mine, which is what I’m starting with, and that’s the turnover issue. Yikes, that was ugly, and I’m looking specifically at you, Andre Cubelo. Those last half a dozen possessions were awful, not to mention a handful of close calls through the first 30 minutes. But it wasn’t just Curbelo.

Each starter had at least two turnovers. Coleman Hawkins tallied five, Trent Frazier and Omar Payne each had three and Jacob Grandison had two. Alfonso Plummer had two turnovers off the bench, and Da’Monte Williams had one. Benjamin Bosmans-Verdonk barely touched the ball and had no turnovers, and Luke Goode only was in the game for one minute. So, the seven Illini that played real, meaningful minutes and had the ball in their hands consistently all turned the ball over. Yuck.

Marquette, which started three freshmen, turned the ball over 14 times. That isn’t great, but it looks a heck of a lot better than what this older, supposedly more mature Illini team did.

Now, there are some things to take into consideration, with the main one being that three of those main guys played in their first major away game in front of fans. Curbelo and Hawkins are sophomores, meaning they didn’t get the true away game feel last season, and Grandison is a transfer from a smaller school, so you could consider his situation to be similar. But there are still some major issues there.

Curbelo is supposed to be one of the best guards in the country, and he just didn’t look that way Monday night, especially with the turnovers. Late in the game, it seemed like every time he touched the ball was a bad possession, whether it be an ugly shot or a bad turnover. I consider a bad shot a turnover, but that isn’t an official stat. Even on the last play of the game for Illinois, after all the mistakes he made, Curbelo didn’t pass the ball and ultimately turned it over. Which, by the way, was an extremely fitting way for that game to end for Illinois.

As far as Hawkins, Frazier and Williams go, I’m less worried, but they clearly still have several things to work on. Hawkins had five turnovers, but similarly to Curbelo, he had a not-so-good game all around in his first true road game as an Illini, and in his case, getting real minutes. It may be surprising now, but Hawkins didn’t really play last year. He’s as close as the Illini have to a freshman in the starting lineup, and like the rest of his game, he’ll mature. But he’s got to do so fast.

Frazier and Williams didn’t have a crazy amount of turnovers, but you need more veteran leadership in times like these, and it wasn’t totally there. Frazier even turned his back with 30 seconds to go up by a point and turned the ball over, which led to Marquette’s game-winning points.

Brad Underwood needs to help figure something out because that was one of the sloppiest performances I’ve ever seen out of an Illini team, and even without Cockburn, there’s way too much talent to be turning the ball over that much. Unless the Illini make a dramatic improvement, which I think they can, this team will be in some trouble later on.

Does Cockburn being on the floor help with this issue? Probably.

Obviously, Cockburn will be getting far more touches down low, which will limit other guys having to take bigger roles. But you have to get him the ball first, and that’s why Cockburn doesn’t make as much a difference in the turnover column.

Many of the turnovers near the end of the game happened early in the shot clock, mainly the final two by Frazier and Curbelo. Cockburn will help in some ways, but Frazier, Curbelo and every other wing player have lots of work to do regardless.

Now for the other major issue, which Cockburn should help a ton with. Scoring.

Sixty-six points against Marquette? Only 27 in the first half? I know those numbers aren’t terrible, but if you watched the game live and saw the Illini shoot 37% from the field, you would understand how bad it was.

Most metrics showed preseason that Illinois was a top-25 team even without Cockburn, and on the defensive side of the ball, that’s true. I have no major problem with the way Illinois defended Marquette. Small things, but those were all very common and nothing to sweat about.

On offense, though, the way they played, they didn’t look like a top-25 team at all. Frazier led the game with 23 points and was 7/15 from the field and 6/10 from three, which are both really good. Nice job. Outside of him, Illinois shot 34% from the field and an ugly 21% from three.

Grandison had a good game as well, putting up a quiet 10 points on 4/9 shooting and 2/4 from three. Hawkins shot 50% from the field, 25% from three. But that’s about it for the good. Payne made all three of his shots, but they were all wide open. He can’t create at all. Williams didn’t score. Plummer, who shot 40% from three last season, continued his struggles and only had two points. The team as a whole really struggled from three, and if Plummer and Curbelo don’t improve (I think they will), the team is in real trouble.

And, possibly most importantly, no one was able to step up at the end of the game to get a bucked when the Illini needed it. Missing Ayo Dosunmu yet?

Alright, there are some huge factors to point out here. One, turning the ball over 26 times prevented a lot more shots from going up. That’s extremely significant and shouldn’t happen again. Sixty-six points considering that many turnovers is almost impressive but still was ugly as a whole.

The other major factor is that Cockburn wasn’t there. And he’ll help a ton. The big man does so many things on offense that Illinois will benefit from, especially Curbelo.

First, Cockburn has skills that no big man on the team is even close to having. His footwork, size and strength allow him to be dominant inside, which helped him average almost 20 points per game last season. He also developed a bit of a hook shot, which would be great to see for a full 2021-22 season. Obviously, Cockburn hasn’t learned to shoot outside yet, which is why he isn’t up in the NBA, but he has phenomenal college skills.

Second, he draws defenders like crazy. Underwood has this idea to get a great passing point guard with a dominant big man, surrounded by shooters. With Cockburn, that’s what he has. When he has the ball down low, Cockburn has to draw a double team, which allows shooters to be left alone.

When Curbelo drove to the basket late in the game against Marquette and was blocked twice, it’s because there was no big guy down low for him to dish it to. With Cockburn in, which we saw so much last year, Curbelo will land plenty of assists and most likely get to watch his teammate throw down a rim-shaking jam.

The shooting hasn’t been up to the level it needs to be and the end-of-game-situation still needs to be figured out, but Cockburn should at least help a little with both of these.

His presence on the floor alone opens things up, which leaves more options for Curbelo to drive with the ball in late-game scenarios, and open shooters should improve 3-point percentages considerably.

In all honesty, Cockburn’s return could bring Illinois back to a top-10 team sooner than we think. But ultimately, it won’t happen without more maturity on offense, improved shooting and an answer for late-game situations.