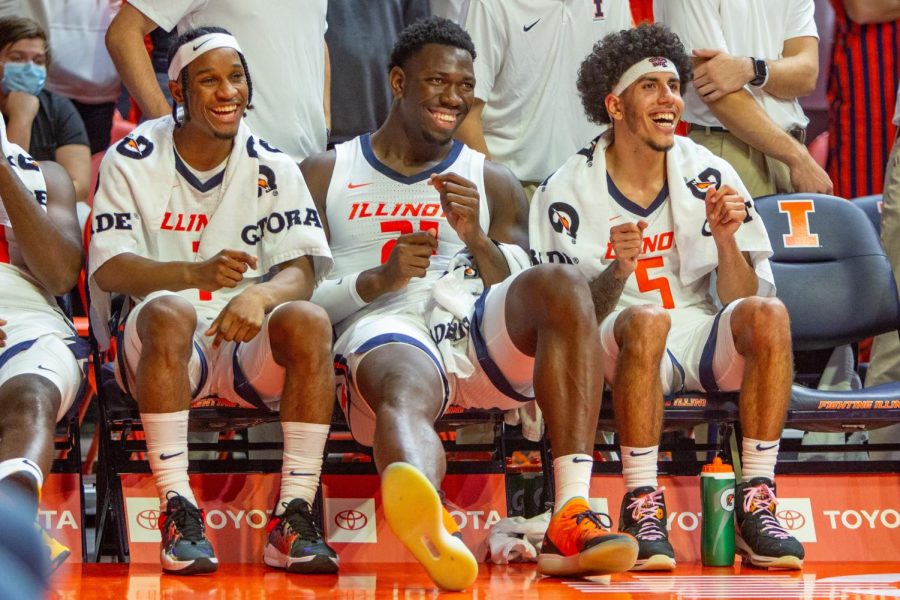 Center Kofi Cockburn (21) with guards Andre Curbelo (5) and Trent Frazier cheering from the sidelines during the game against St. Francis on Nov. 23. Cockburn will be back to play against Cincinnati on Monday.

The Illini men’s basketball team will play their first game with a full roster on Monday at 5:30 p.m. They will face the 4-0 Cincinnati Bearcats at T-Mobile Center in Kansas City, Missouri.

In what will be Kofi Cockburn’s first game back from suspension, the Illini will kickoff the Hall of Fame Classic, a four-team tournament consisting of Illinois, Cincinnati, Arkansas and Kansas State.

Prior to the current season, Cockburn was named to Player of the Year, Naismith Trophy and Wooden Award watch lists. The Illini have missed Cockburn’s production, but they managed to come out of the three-game suspension with a 2-1 record.

Cockburn has been an iron man for the Illini in his first two years, having started every game since he stepped foot on campus and averaging over 27 minutes per game.

“My team played really well,” Cockburn said. “We’re the top team defensively right now; they did some really great things without me that gave me a lot of joy, a lot of happiness. On the flip side, I was envying them because I wasn’t able to be out there with them. Three games is a long time when you haven’t missed a game in two years.”

This is only the fourth time the Illini will play Cinicinati in basketball. The Illini are on a three-game winning streak against the Bearcats, with their last loss coming back in 1963. Last week, Cincinnati head coach Wes Miller became the fourth coach in program history to start the season 4-0.

Miller was a player on the 2005 North Carolina team that beat Illinois in the NCAA tournament national championship. Cincinnati is led by junior guard Jeremiah Davenport, who is currently averaging 12.5 points and 4.8 rebounds per game. Davenport was named to the All-AAC tournament team this year.

“We gotta handle the pressure,” Underwood said. “They throw a lot of pressure at you; they get in the passing lanes. They throw multiple ball-screen coverages at you based on personnel. They have four centers who are all different.”

The Illini head to Kansas City following a disappointing loss to Marquette in Milwaukee. The Illini struggled on offense, and a lot blame was put on Andre Curbelo, who was coming off of a concussion and didn’t practice leading up to the game against the Golden Eagles.

Underwood doesn’t believe Curbelo’s recent struggles are a good representation of who he is as a player. Instead, he thinks the biggest reason for the loss was the absence of Cockburn.

“I think we lost a game that we shouldn’t have lost, and we don’t lose that game if we have him,” Underwood said. “I know with me, it’ll give me a ton of confidence when that big fella’s in there, and we can throw him the ball. There’s probably 9-10 fouls a game and 5-6 dunks.”

Cockburn doesn’t have any nerves leading up to his season debut.

“I dont expect there will be any rust; I’ve been working on my game a lot,” Cockburn said. “I expect I’ll go out there and dominate as much as I can and lead the team as much as I can.”