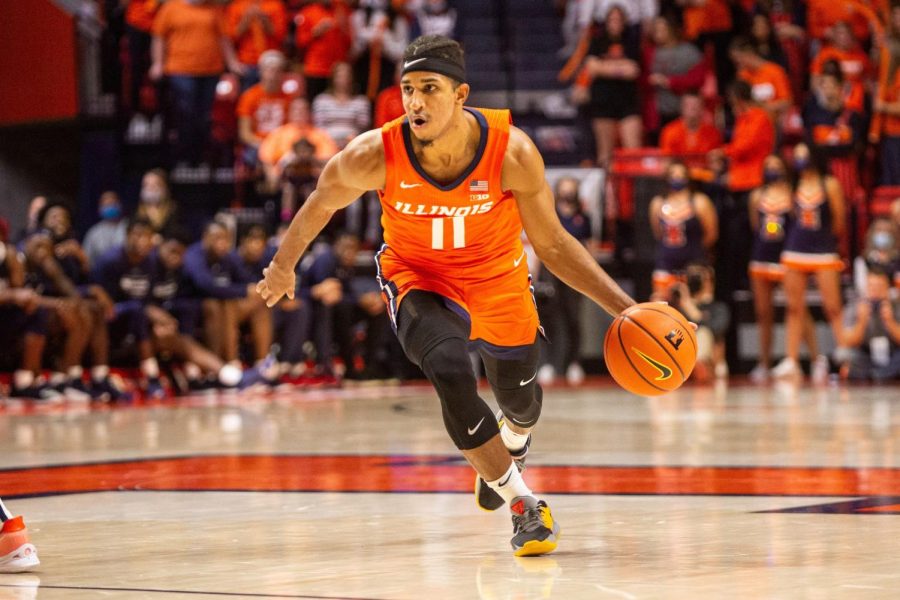 Alfonso Plummer dribbles during Illinois’ game against Jackson State on Nov. 9. Plummer scored 21 points on seven triples in the Illini’s 72-64 win over the Kansas State Wildcats on Tuesday night.

Alfonso Plummer and Kofi Cockburn combined for 44 points in a 72-64 Illini victory over Kansas State on Tuesday night. The Illini snapped a two-game skid, winning the consolation game of the Hall of Fame Classic in Kansas City.

Coming into Tuesday, Plummer had scored 25 points and made five threes on the season. In just 19 minutes, he scored 21 points with seven threes made against Kansas State. Plummer was one three away from tying the Illini record for threes in a game.

Plummer felt like he had struggled to start the season, but he was happy to get back on track.

“I was working extra hours in the gym, and finally when I made the first one, I was like, ‘I’m back,’” Plummer said. “That’s why I started screaming … because then I felt that confidence back. If I start or not, I know what my role is: to score threes and get stops.”

This is the role Plummer was expected to play when he announced that he would be transferring to Illinois in April. His early-season struggles could be due to the fact that he was forced to initiate plays with the ball his hands while Andre Curbelo and Trent Frazier were out.

Illinois saw Plummer in his natural role on Tuesday, but in the process, Frazier was injured again, and Curbelo’s concussion symptoms played a recurring role in the national TV broadcast.

No updates were given on either guard’s health status, but Plummer clearly benefits from having them on the court. All of Plummer’s threes were of the catch-and-shoot variety, in which he excels.

Cockburn returned to dominance after struggling in the second half just one night before against Cincinnati. He scored 14 points without missing a shot in the first half against Kansas State. He finished the game with 23 points, 13 rebounds, a block and a steal in 32 minutes.

Cockburn also recorded two assists, one of which resulted in a Plummer corner three. Cockburn struggled passing out of the post last year, when he recorded just five assists all season. On Tuesday, he showed improvement in that area.

“We got to move the ball more. … I feel like if we moved the ball more on offense, anybody could get shots,” Plummer said. “We all know they’re gonna double, triple team Kofi. … He understands that; he’s a smart player.”

Illinois head coach Brad Underwood was pleased to come away with the win, but he also was frustrated with the cards his team has been dealt this season.

“It just hasn’t gone smooth. There’s been bumps in the road, but that locker room is filled with a bunch of guys who really want to be really good,” Underwood said. “I thought (Plummer) was pretty good. I didn’t like what he called his ‘heat check’ shot. … He’s been struggling, and it’s been frustrating. … We’ve all been struggling.”

Underwood said Plummer has shot six to seven thousand balls in the past week in response to his struggles. Plummer’s resurgence couldn’t have come at a better time for the Illini, who have struggled to display the depth many assumed would be their strength.

With the uncertainty surrounding Frazier and Curbelo, depth will be front and center for the Illini in the coming weeks. Underwood hopes health “comes sooner than later” for his team.

Illini fans impacted the game all the way in Kansas City where “I-L-L … I-N-I” chants could be heard easily.

“The bench was energetic, coaches were energetic, the fans. So I feel like that energy, it gave a message to the players out there,” Plummer said, “It kept us motivated to just play hard every possession and help us to win the game.”