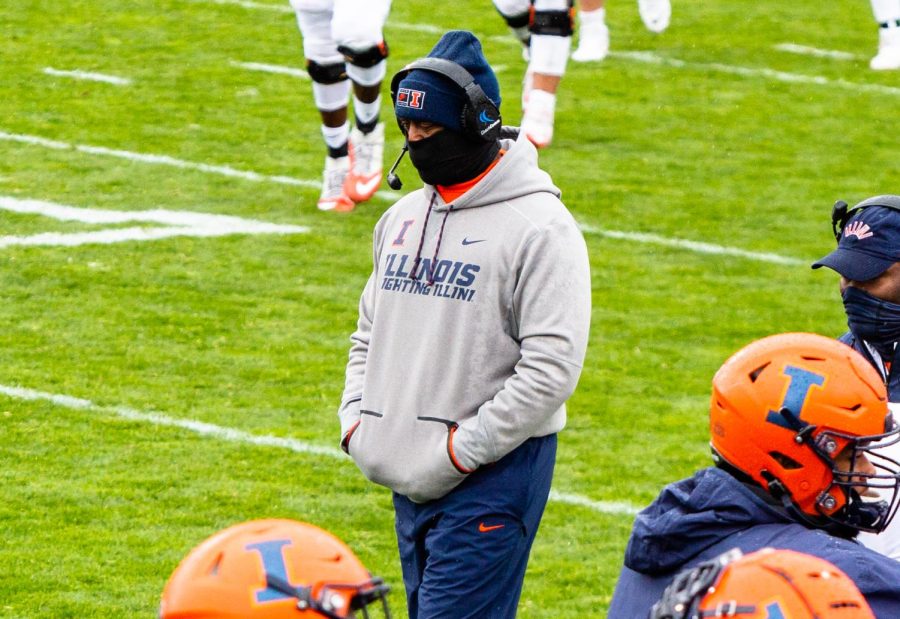 Lovie Smith, previous head coach of the Fighting Illini football team, walks along the sidelines at Ryan Field during the game against Northwestern on Dec. 12 the day before he was fired. The Illini have gone through a series of coach cycles since 2006 giving Northwestern an advantage against the team for the past 15 years.

In July 2006, following the unexpected death of Randy Walker the month prior, a man that had been Northwestern’s head coach for six years, then linebackers coach Pat Fitzgerald was promoted to head the team. Fifteen years later, he’s the sixth longest active tenured head coach in the Football Ball Subdivision.

Illinois, however, never exactly found a permanent answer during that time. Since July of 2006, the Illini have had seven different head coaches for at least one game, five if you don’t count interim coaches.

At the time, Illinois was coming off Ron Zook’s first season as head coach of the team, one he wanted to forget very quickly. The Illini finished the season at 2-9 and 0-8 in conference play. The 2006 season wasn’t much better, as Illinois went 2-10 and 1-9 in Big Ten action.

Despite the disappointing records in his first two years, Zook actually turned the program around and led Illinois to a memorable 2007 season, which has been Illinois’ best since 2001. The Illini went 9-3 and 6-2 in the Big Ten, highlighted by an upset win at Ohio State, the top-ranked team in the country. Zook was named the Big Ten Coach of the Year and guided Illinois to the Rose Bowl, where it lost to USC, 49-17.

The Rose Bowl wasn’t great, but for the time being, the Illini thought they had their guy. He completely flipped the program, made a Rose Bowl and was recruiting talent.

But that didn’t last long. The Illini followed their Rose Bowl appearance with two straight losing seasons, then went 6-6 two seasons in a row. Zook coached the team during their Texas Bowl victory over Baylor, but he was fired before their 2011 bowl game against UCLA, where interim coach Vic Koenning coached his only game as head coach for the Illini.

One (official) coach down.

From 2006-2011, Northwestern started similarly to the Illini but finished much better. In Fitzgerald’s first year, the team went 4-8 and 2-6 in conference. But the next year, despite no bowl game appearance, the Wildcats went 6-6.

Then, things started to heat up.

In 2008, Fitzgerald coached Northwestern to a 9-3 record and 5-3 in conference before facing a very good Missouri team that they lost to in the Alamo Bowl. They followed in 2009 by going 8-4 and 5-3 in conference with another bowl appearance, this time a three-point loss to Auburn, which won the BCS National Championship the next year.

Things were looking good for Fitzgerald and the Wildcats, and that success continued, just not as often. After two more bowl appearances in 7-5 and 6-6 (3-5 each in conference) seasons, Northwestern lost both bowl appearances, which made four straight bowl losses.

In those six years, Illinois and Northwestern split its games three wins apiece.

Following the firing of Ron Zook, the Illini hired Tim Beckman, who found success as Toledo’s head coach the three years prior.

He didn’t exactly work out.

In his first two seasons, Beckman went 2-10 and 4-8, respectively, with a crisp combined 1-15 in Big Ten play. He did lead the Illini to a 6-6 (3-5 conference) record in 2014, defeating Northwestern in the final game of the regular season to become bowl eligible. Illinois lost to Louisiana Tech in the Heart of Dallas Bowl in a blowout.

Just a week before the 2015 season, Beckman was fired after an investigation showed he mistreated players, most seriously pushing players to compete through injuries.

In 2012, Fitzgerald ended his streak of bowl losses after an impressive 9-3 (5-3) record and a 34-20 Gator Bowl victory over Mississippi State. But that was followed up by two straight 5-7 seasons.

Northwestern won two of the three meetings in that time span.

Since Beckman was fired just a week before the season started, Bill Cubit, who was promoted from offensive coordinator, took over head coaching duties for Illinois. The team went 5-7 (2-6), failing to make a bowl after losing to Northwestern, 24-14.

Cubit was actually given a two-year contract after that game, but following the hire of new athletic director Josh Whitman in 2016, Cubit was relieved of his duties.

In 2015, Northwestern had a great year. Fitzgerald led his team to a 10-2 (6-2) record, highlighted by an early-season win over Stanford. The Wildcats were beaten badly in the Outback Bowl, though, a 45-6 loss to Tennessee.

Whitman’s first hire as athletic director of Illinois was none other than Lovie Smith, former Chicago Bears (and Tampa Bay Buccaneers) head coach. The hire excited Illini fans, as many are also Bears fans, despite Lovie having zero college head coaching experience and was last an assistant in college as Ohio State’s linebackers coach in 1995.

After a 21-year absence from college football and first time as a collegiate head coach, Smith had a poor first three seasons. 3-9, 2-10 and 4-8 (2-7, 0-9, 2-7) were not records Illinois was looking for, but he had been seemingly recruiting well. The progress continued in year four.

2019 was a very memorable season for Lovie and his Illini. After a 2-4 start, Illinois defeated then undefeated and sixth-ranked Wisconsin at home, sparking a four-game win streak. The fourth win in that stretch was a comeback win at Michigan State, where Illinois found themselves trailing 28-3 at one point. Illinois then lost back-to-back games, at Iowa and at home against a bad Northwestern team. But the Illini were missing about half their starters against the Wildcats.

Smith and the Illini fell to a very talented Cal team in the Redbox Bowl that season, a game that was close until midway through the fourth quarter.

Hopes were high for Illinois in 2020, but the team was hit hard by COVID-19 early on and never really recovered. The only games played were within the conference, and Illinois went 2-6.

Lovie was fired before the team’s final game of the season.

In seasons where Lovie Smith didn’t make a bowl game, Fitzgerald and Northwestern did. In 2016, the team went 6-6 (5-4) and won the Pinstripe Bowl over Pitt by a touchdown.

In 2017, Fitzgerald had his second 10-win season of his career. They went 9-3 (7-2) before defeating Kentucky by a point in the Music City Bowl. They followed that up with another impressive year, going 8-4 (8-1), winning the Big Ten West and defeating a quality Utah team in the Holiday Bowl.

2019 wasn’t good for Northwestern and Fitzgerald. The Wildcats had an off year defensively and cycled through quarterbacks, finishing the season 3-9, with their lone conference win coming at Illinois.

In 2020, the Wildcats had another solid season, going 6-1 in the conference-only regular season and finished atop the Big Ten West for the second time. They then won their seventh game of the year as a result of a victory in the Citrus Bowl, defeating Auburn handily.

Bret Bielema, who previously coached Wisconsin and Arkansas, was hired by Illinois late in 2020 and has led them thus far to a 4-6 record. Fitzgerald and the Wildcats sit at 3-7 overall. They play each other in the final regular season game of the year on Nov. 27.

Whew, that was a lot. And by that, I mean Illinois coaches since Fitzgerald took over for Northwestern back in 2006.

You’ve got to give credit where credit is due, and Fitzgerald deserves all of it. On paper, Illinois should be an easier place to win than Northwestern, but Fitzgerald has done nothing but dominate the Illini since he’s been the head coach in Evanston.

Northwestern is 11-4 against the Illini since naming Fitzgerald as head coach. They have made 10 bowl games, with a solid 5-5 record in those games, compared to Illinois, which has made five bowls in the last 15 years, going 2-3.

Fitzgerald has recruited better, which includes within the state of Illinois, has figured out the X’s and O’s and overall has found a way to run a consistent and successful program over the last 15 years. His overall record is 109-88, including two Big Ten West titles.

Bielema seems to be determined to recruit the state of Illinois stronger than Illinois has seen in years’ past, but it will take a lot to consistently be better than Fitzgerald and Northwestern. The teams will face off this season while both being under .500 for the first time since 2014.