‘I would love to go out with a win’: Kramer aims to snap losing streak in final college season 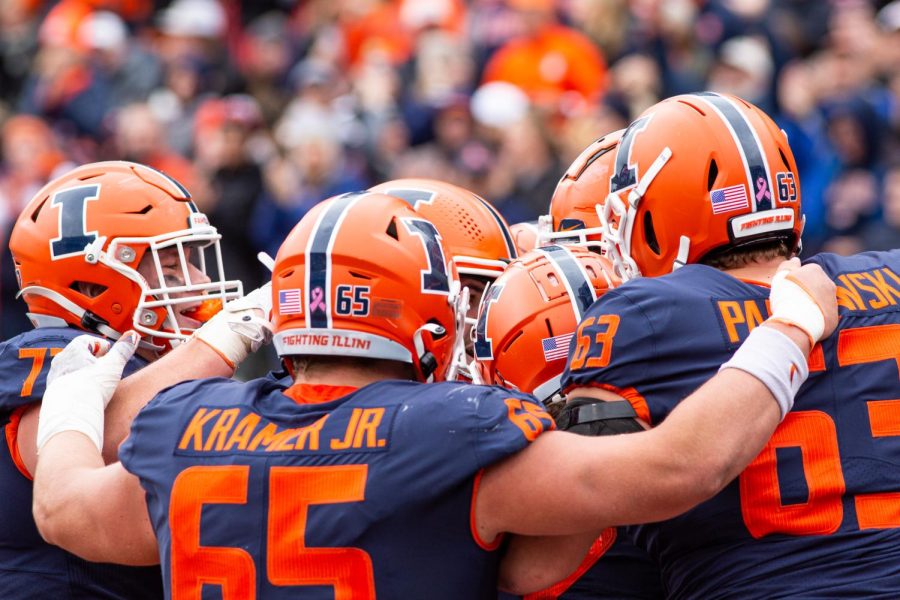 Offensive linebacker Doug Kramer embraces his Illinois teammates during the game against Rutgers on Oct. 30. Kramer hopes to break the team’s losing streak in his final college season.

When Doug Kramer chose to attend Illinois, he was following in the footsteps of his parents, who both graduated from the University in the 1990s.

Now, he’s created his own legacy, playing in 47 games after taking over the starting center position all the way back in 2017. Since then, he’s seen the team go winless in conference play during his first season as a starter, earn a bowl berth in 2019 — though he missed the Redbox Bowl due to an injury — and go through massive coaching changes this offseason.

Despite having played at Memorial Stadium for five seasons and being a member of the team since 2016, there’s still one thing he hasn’t been able to do: beat Northwestern.

Hailing from Hinsdale, located about 25 miles southwest of Evanston and two hours north of Champaign, Kramer grew up well aware of the rivalry between the in-state Big Ten schools.

But it didn’t always seem like Kramer would wind up playing in Champaign, as he initially committed to Florida Atlantic and seemed destined for southeast Florida and the sandy beaches of Boca Raton.

Just over a month later, he received an offer from Illinois and ultimately decided to stay and play football in his home state.

Since then, he’s made dozens of starts, been named to several award watch lists and eventually become a team captain.

With that captain’s role comes added responsibilities, and he recognizes that the team looks up to him, especially when it comes to rivalry games, using his in-state background to bolster the intensity heading into the final games of his college career.

“This is what makes college football fun to play,” Kramer said. “You want to play rivalry games, you want to play games where the fan bases don’t necessarily like each other. That’s really what you really come play Big Ten football for, so it’ll be a great challenge.”

Playing against Northwestern four times already in his career, Kramer has seen the same result every year, as the Illini are currently on a six-game losing streak against the Wildcats, with the program’s most recent win coming back in 2014 in a 47-33 Illinois victory in Evanston in Tim Beckman’s final season at the helm.

In Kramer’s time in Champaign, he’s seen the Illini get blown out of the water in the rivalry game, including a 42-7 home loss in 2017, while also falling by a narrow margin the following year in a 24-16 loss at Ryan Field.

Over the last two seasons, Illinois has lost by double-digit margins each year, falling 29-10 on a cold and rainy afternoon in Champaign in 2019 before losing 28-10 last season.

With 22 super seniors on Illinois’ roster, none of which have achieved victory against Northwestern while at Illinois, Kramer wants to leave with a bang by bringing the Land of Lincoln Trophy back to Champaign.

“It’d be huge for not only me, but for this senior class,” Kramer said. “We want to leave this place better than we got here and doing that will definitely do that. We have a heightened sense of urgency right now. … It would definitely be huge for this entire senior class to be able to bring that trophy home.”

After donning the orange and blue of Illinois for six seasons, something he dreamed of doing growing up, this will be Kramer’s final season in Champaign. Regardless of the team’s records during his college career, he wants to go out on top.