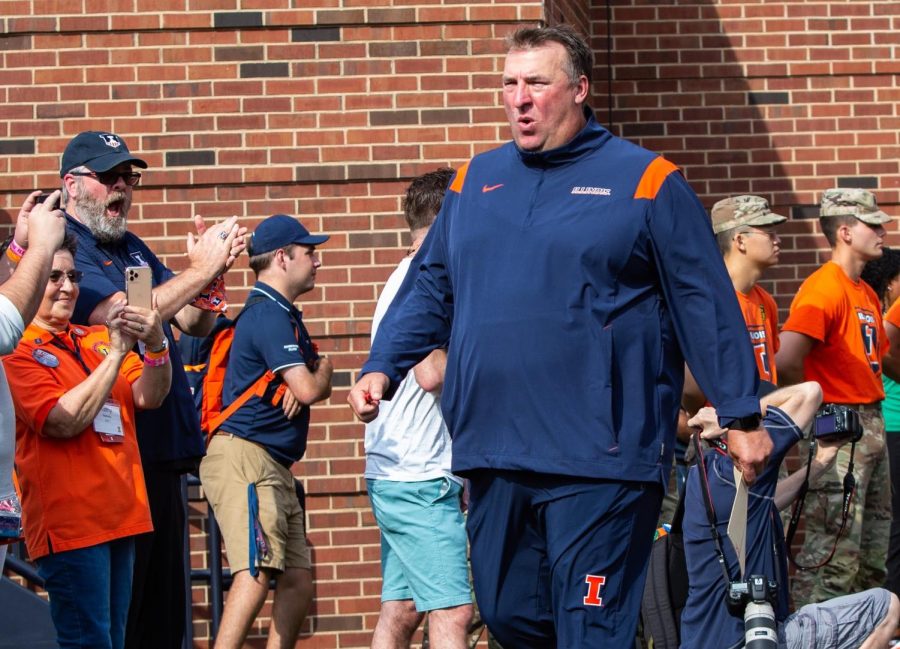 Illinois head football coach Bret Bielema walks onto the field at Memorial Stadium before the game against Wisconsin on Oct. 9. Bielema has focused on in-state recruiting in hopes of a brighter future for the Illini.

For years, Illinois and Northwestern have competed not only on the gridiron but for some of the highly touted high school players throughout the state of Illinois.

There are many different factors that lead to a recruit’s decision to sign with a particular school, such as the talent of the program, location of the university or the team’s facilities. But perhaps the most important swinging factor is the individual recruitment strategy from the head coach.

The head coach of any successful college football program spearheads this process, and with a good plan, a talented recruiting coach can completely transform a football team.

For the overwhelming majority of their history prior to 2006, the Northwestern Wildcats were not necessarily known for being a stellar football school. Aside from their 10-2 team in 1995, you’d be hard pressed to find many solid Wildcat football seasons, bar teams that played before The Beatles were performing.

This losing reputation all changed when head coach Pat Fitzgerald arrived in Evanston. He has become a winning coach in Northwestern’s history. Nine out of the 16 completed seasons have finished with winning records, and the Wildcats have reached a bowl game in five of the last six seasons.

The cherry on top of his successful years occurred during the 2020 season, when Fitzgerald was named the Dodd Trophy Coach of the Year and Northwestern finished atop the Big Ten West.

Fitzgerald’s knack for not only recruiting but developing talent is widely documented. In this year’s NFL draft, Northwestern’s Rashawn Slater and Greg Newsome II were both taken in the first round.

Although the production of first-round NFL talent will surely draw the eyes of more top-level recruits, the rest of the team will always be filled out with players of varying talent levels.

Back during the 2016 Big Ten signing day, Fitzgerald spoke with the media about the thought process he goes through when considering a player for the Wildcats. He spoke about how he wants fearless members on his team, which is a clear tone-setter for a successful program.

“If a guy is afraid of competition, I’m not sure they’re a good fit for our program,” Fitzgerald said. “And I’m probably not a good fit as their coach.”

Along with committing many hours to the football team, Northwestern has a reputation of being one of the most academically rigorous schools in the nation. Fitzgerald wants to make sure his recruits are not only ready to play Wildcat football, but that they’re prepared to visit office hours during their off days.

“I gotta help him understand that he’s gonna go to the water fountain, think he’s gonna drink water and get hit by a fire hose,” Fitzgerald said.

Though the Wildcats will not make a bowl game this season, Fitzgerald’s job is as safe as anyone’s in the country.

On the other hand, Illinois football hasn’t had much recent success since its Rose Bowl appearance against USC in 2008. Once the Lovie Smith experience came to a crashing halt after the 2020 season, Bret Bielema was brought in as the new head coach.

After the announcement of Bielema, many of the Illini faithful were skeptical he could return the program to its former heights, especially after his tumultuous run with the Arkansas Razorbacks.

The reason why Director of Athletics Josh Whitman brought in Bielema was quite simple: A coach with his pedigree may be able to woo some top recruits down to Champaign. During his tenure with Wisconsin, Bielema led the Badgers to three Big Ten Championships with a strong run game and a solid defense.

For the most part this season, Illinois had its successes stem from Bielema’s signature game plan. The Illini have had some embarrassing losses, but wins at No. 7 Penn State and No. 20 Minnesota have been impressive from the first-year head coach.

After his hiring, it was reported that Bielema reached out to every high school football coach in the state, announcing that Illinois was turning their recruiting focus to within its own state. At Big Ten Media Day, he reaffirmed this belief, setting the road map to consistent success in Champaign.

“I really believe this,” Bielema said. “For Illinois to be successful like they’ve never been in the past, they have to recruit the state of Illinois better than they have in the past.”

One of the embarrassing losses this year for Illinois came at the hands of the Wisconsin Badgers, Bielema’s former employer, getting shut out, 24-0, on Homecoming Weekend. But instead of sulking during the bye week, Bielema and the rest of his staff got right back to work on the recruiting front.

“I was in four different states (Monday),” Bielema said the week after the Wisconsin loss. “I was with (offensive line) coach Bart Miller. We spent basically a 36-hour window to focus mainly on (the) offensive line. I kept all of my (other) coaches back in the office here so that they could do a little bit of self scouting on what we’ve done and where we’re at. ”

Illinois and Northwestern will kick off on Nov. 27 at Memorial Stadium, and there’s no doubt top recruits from not only around Illinois but around the country will have their eyes on this matchup.