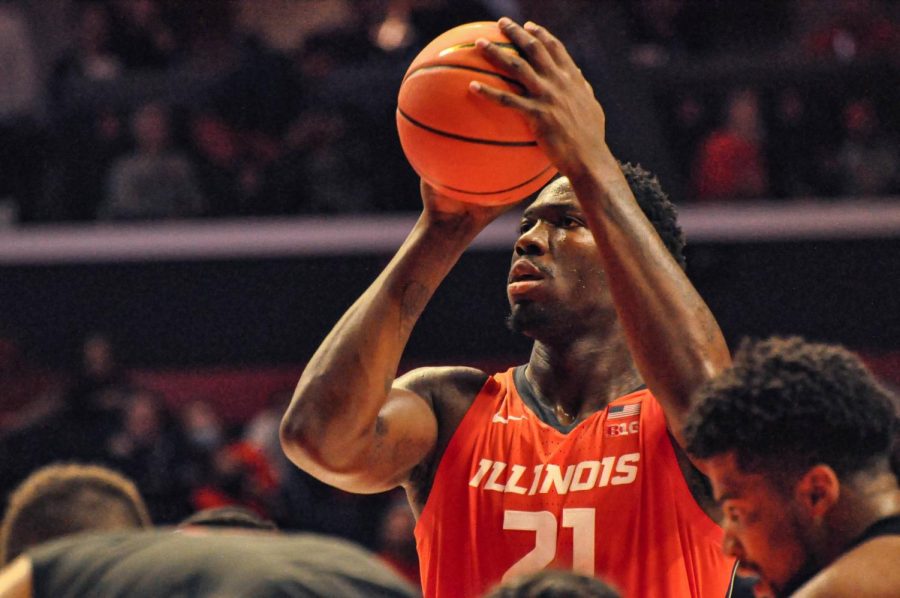 Kofi Cockburn shoots the ball during Illinois men’s basketball’s game against Arkansas State on Oct. 29. The Illini beat the Kansas State Wildcats in the third-place game of the Hall of Fame Classic on Tuesday night.

Playing against former Illinois coach Bruce Weber and guard Mark Smith, Illinois took down Kansas State in the third-place game of the Hall of Fame Classic via a season-high 23 points from Kofi Cockburn and 21 points from Alfonso Plummer, all of which came from behind the 3-point line.

Kofi Cockburn opened the game on a strong note, scoring the game’s first five points of the game via three free throws and a contested hook shot.

After the Wildcats went on a 4-0 run to cut their deficit to a point, a trey from Andre Curbelo and a Cockburn layup opened the Illini lead back up to six points.

Once Curbelo came off the court, the offense struggled to get going, failing to score for nearly four minutes before a Cockburn layup tied the game at 16.

In need of a spark on offense, Alfonso Plummer came off the bench and hit his first three shots from beyond the arc in the span of 81 seconds as Illinois went on a 9-2 run to open up a 25-20 lead with less than eight minutes to play in the first half.

Illinois was never able to open up a lead bigger than seven points, though it headed into halftime with a narrow 34-31 lead behind 14 points from Cockburn and nine points from Plummer despite the Illini registering eight turnovers in the first 20 minutes of play.

Coming out of halftime, Kansas State opened the second half on a 6-0 run before an Austin Hucherson layup and five straight points from Cockburn gave Illinois a 41-37 lead.

From that point, the Illini went on another scoring drought, this one spanning over three minutes as the Wildcats retook the lead via five straight points from Ismael Massoud. After snapping the skid, Illinois used triples from Plummer and Jacob Grandison before the latter guard finished a fast-break layup and Cockburn converted a free throw to go on a 9-0 run and take a 50-42 lead, the largest of the evening.

Illinois started heating up from beyond the arc, with Plummer hitting his fifth and sixth of the game and Hawkins notching his second to open up a 62-49 lead with under six minutes to play, though Trent Frazier headed to the locker room after appearing to suffer a left leg injury, ending his tournament run with zero points.

Plummer and Wiliams used treys, two of seven for the Illini in the second half, to maintain the 13-point lead, and despite allowing a 7-0 run, a free throw from Grandison and a Cockburn jumper opened up a 71-62 lead.

A Cockburn free throw sealed the deal for the Illini, who snapped their two-game losing streak and moved back over .500 on the season.