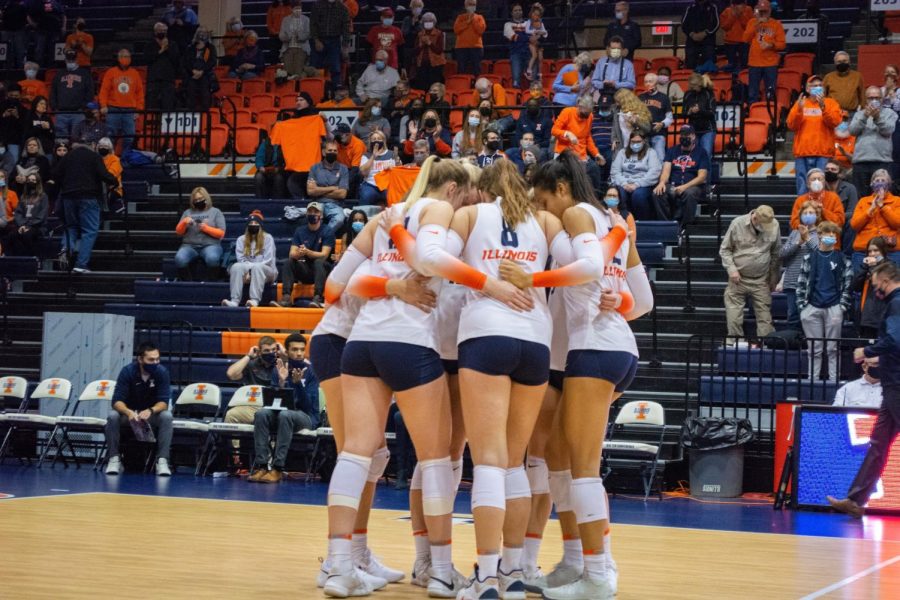 The Illinois volleyball team huddles together during the match against Indiana on Nov. 12 at Huff Hall. The Illini will take on the Michigan Wolverines and the Michigan State Spartans this week to close out the regular season.

With the NCAA set to announce the teams participating in the league’s national postseason tournament on Sunday, No. 23 Illinois wraps up its regular season in Michigan, taking on Michigan in Ann Arbor on Wednesday before heading to East Lansing on Friday to face Michigan State.

The Illini are coming off a strong week in which they beat both the Indiana Hoosiers and Maryland Terrapins in straight sets on Friday and Sunday, respectively.

Illinois took down Michigan, 3-1, in Champaign on Oct. 23, with Cooney registering a double-double, the 12th of her career, with 20 kills and 10 digs, while Terry also notched a double-double with 13 kills, 10 digs and four blocks.

The Wolverine offense is led by sophomore Jess Mruzik and senior Paige Jones, who both have over 300 kills this season, while junior May Pertofsky leads the Big Ten in service aces per set at 0.47, just 0.01 more than Terry of Illinois.

Michigan State enters the weekend on a three-match losing streak, though it already has an upset win on the road against Purdue on its resume this season.

Sophomore Sarah Franklin leads the team in kills with 375, averaging 3.99 per set, the third-best mark in the conference, while junior Biamba Kabengele sits fourth in the Big Ten in service aces per set with 0.41.

Defensively, senior Naya Gros sits tied for fourth in the conference with 1.32 blocks per set.

Illinois will take on Michigan at 6 p.m. on Wednesday evening before playing Michigan State on Friday night at 6 p.m. The NCAA tournament selection show will be held on Sunday at 7:30 p.m.