Illini get heated in open practice 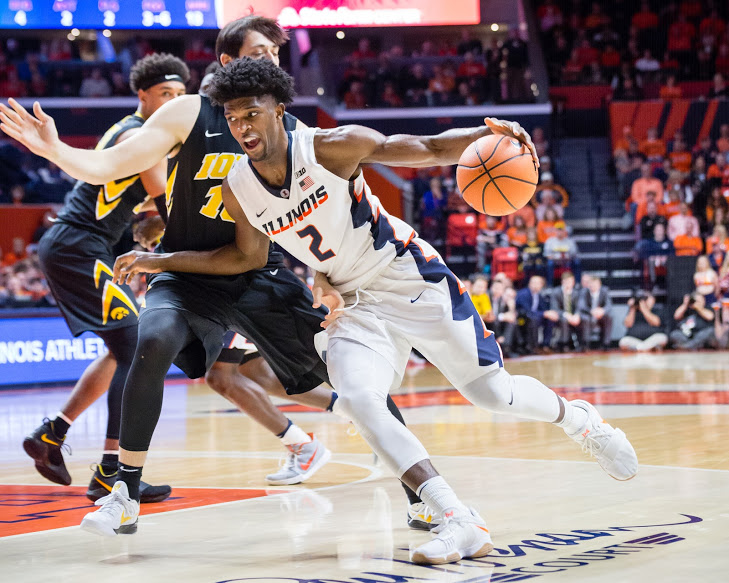 Illinois forward Kipper Nichols (2) drives to the basket during the game against Iowa at State Farm Center on Thursday, Jan. 11, 2018. The Illini lost in overtime 104-97.

With about three weeks left until the return of college basketball, the Illinois men’s basketball team held another practice open to the fans and media at 11 a.m. in the Ubben practice facility Saturday.

While the players and Underwood weren’t available for interviews, here’s what went down.

After the warmup drills were completed, the Illini went full-court live 5-on-5 in multiple drills. A rebounding drill started off the live ball sections, and Underwood made himself heard, showing frustration with the team for its lack of communication and spotty effort.

Junior Kipper Nichols gave up an offensive rebound to freshman Tevian Jones and was laid into by Underwood, who told him that he had two rebounds all of last practice and had zero so far on Saturday.

Nichols and Jones got tangled up on the next rep, both playing physically and eventually slamming into the ground. Nichols, who landed on top of Jones, used him to get up, pushing off his body and saying something on the way up.

Nichols’ scrimmage team got the ball and pushed ahead for a tough layup from Andres Feliz, who has continued his strong play, but on the way back down around midcourt, Jones and Nichols came together and began a verbal exchange.

One thing led to another, and punches were thrown and missed before players and coaches could separate them.

Senior graduate transfer Adonis De La Rosa was first on the scene, showing off his ahead-of-schedule mobility by getting between the two wings and restraining Nichols while a group of players and coaches secured Jones.

Underwood chided the two for being childish before starting the same drill over again.

After that incident, there were no more physical altercations, but the physicality of practice picked up, with freshman bigs Samba Kane and Giorgi Bezhanishvili getting into it at one point.

Four-star big man Drew Timme watched the Illini practice on Saturday with his family before working out in front of the remaining fans after practice was over.

Timme, a 6-foot-10 senior from Richardson, Texas, is the 41st ranked recruit on 247Sports and listed the Illini in his top five alongside Alabama, Gonzaga, Texas A&M and Arizona.

After the team’s practice was over and the players were shooting free throws, Bezhanishvili showed off his ability to shoot free throws with either hand before rebounding for Timme to warm him up for his workout.

Just like the last open practice, the Illini brought in referees to officiate the live ball sections.

While it seemed like the Illini got along with the referees for the most part, there were occasions when players — usually the younger guys — didn’t see things the same way as the refs.

Freshman guard Ayo Dosunmu was called for a number of turnovers because of offensive fouls, carries and travels, causing him to have to run nine sprints after practice, one for each turnover.

Bezhanishvili also had a consistent dialogue with the refs. He was unhappy with a number of calls and no-calls he got over the course of practice, most notably a blocking foul he was called for while trying to cut off Dosunmu hedging a pick-and-roll.

Underwood spent a large portion of the practice working on the Illini’s transition defense, with both the orange and blue teams pushing the tempo off misses and makes.

After a couple of trips where the defense surrendered an open three-pointer, Underwood got on his team for their lack of communication, saying their transition defense was horrible because no one on either team was talking.

Underwood also talked about how it may be hard to play so fast and defend a pace like that, but that’s why the Illini are doing it.

At times, Underwood got on various perimeter players for not defending the ball hard enough and other players for making bad reads offensively. Trent Frazier received a bewildered look from Underwood after he took a contested three-pointer when the Illini were practicing sets.

The team now has less than 20 days until exhibition games start at the State Farm Center.