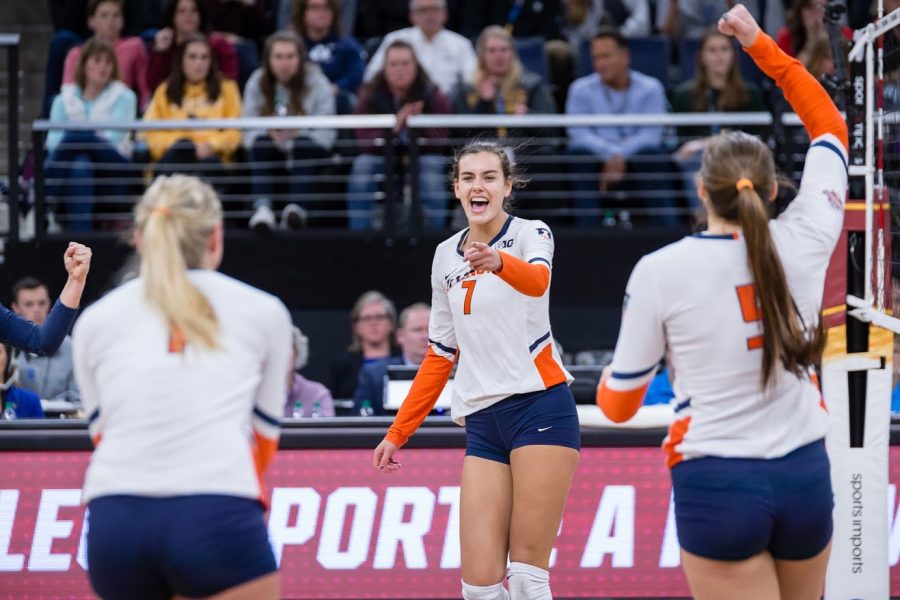 Illinois outside hitter Jacqueline Quade (center) points to setter Jordyn Poulter (left) after scoring a kill during the match against Nebraska in the Final Four of the NCAA tournament at the Target Center on Dec. 13. Nebraska defeated Illinois 3-2.

Illinois volleyball will be hitting the road this weekend to start its spring season. After losing to No. 7-ranked Nebraska in the NCAA Final Four last fall, the team will play a brief spring schedule. The team’s first stop will be West Lafayette, Indiana, where the Illini will take on the Purdue Boilermakers. This year’s spring season will consist of two away matches, one tournament and one home game at Huff Hall.

Illini returning from the fall include senior Jacqueline Quade and redshirt freshman Diana Brown, both of whom are slated to compete for USA Volleyball this summer. In total, 12 members of last season’s semifinalist team will be back in action this spring. The Illini have added two new faces to the spring roster as well — local freshman Rylee Hinton graduated early from Champaign Central to join the squad while sophomore Mica Allison transferred to Illinois from Auburn.

Once more, head coach Chris Tamas will be returning to the helm of Illini volleyball. He is joined by assistant coaches Rashinda Reed and Alfred “Alfee” Reft, who are also returning from the fall season, and his wife Jen Tamas, who serves as a volunteer assistant coach.

After two weekends on the road, Illinois will return to Huff Hall on April 10 to take on Purdue before wrapping up the season at Bradley in Peoria, Illinois, on April 12.