Delgado showcases his hard work on the national stage 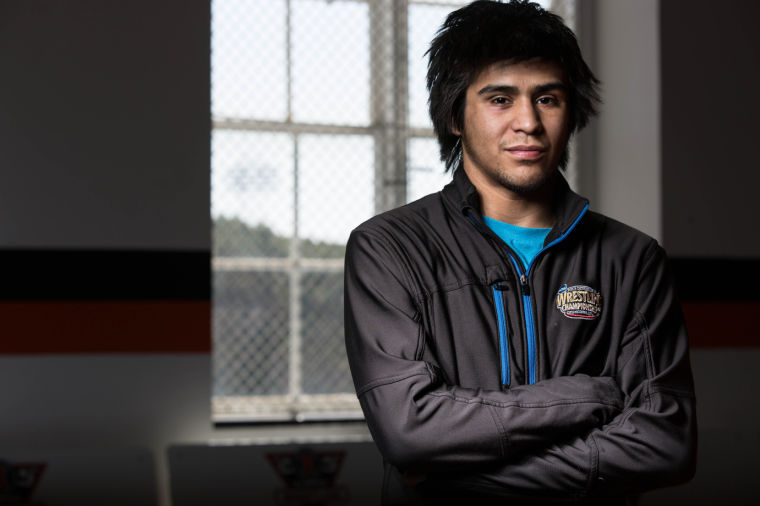 This wrestler won the NCAA tournament recently and became the first Illini to win the national championship in consecutive years.

Editor’s note: The Daily Illini sports desk sits down Sunday nights and decides which Illinois athlete or coach is our Illini of the Week. Athletes and coaches are evaluated by individual performance and contribution to team success.

The 125-pounder had just gone through the grind of another wrestling season, in which he was scouted harder and under pressure to prove he could widen the gap from the competition. He accumulated a 25-2 record going into the NCAA tournament, and then scrambled and shot his way into Illinois wrestling’s record books as the team’s first repeat national champion in 56 years.

Delgado, however, doesn’t want to reflect on his success just yet. He still has one more year of work to do, and training for it started as soon as he got home.

“Watching film is not really studying; it’s just something I enjoy doing, so it’s not like a chore,” Delgado said. “I didn’t get to watch as many matches as I wanted to at the tournament because I was focused.”

Delgado’s focus and commitment to the sport is something his teammates and coaches have come to expect from him.

Head coach Jim Heffernan advised all his wrestlers to be “selfish” during the three days of the tournament, so they wouldn’t get distracted by the actions going on around them. Delgado had no issues with that, keeping mostly to himself throughout the tournament.

“The closer it got to the final, the more he got into his own little world,” Heffernan said. “It’s pretty easy to tell when he is getting ready to compete.”

On what could have been a stressful day, Delgado said nerves weren’t something he had to battle against. He got a good night’s sleep and felt prepared for his second go around in the finals. And while he exchanged few words with anyone heading into the final, his actions spoke for themselves.

In the final match on March 22, Delgado admitted he was not prepared for the quick attack his opponent Nahshon Garrett of Cornell deployed against him, but the defending champion found a way to counter it.

“Garrett hit him with one great shot,” assistant coach Jeremy Hunter said. “It was one heck of a double leg. I was thinking, ‘If (Delgado) doesn’t get taken down with that shot, then he is probably never going to get taken down.’”

He wasn’t taken down. Delgado scrambled out of trouble and was able to score enough points for a 3-2 victory.

The two-time champion was critical of himself for not being better prepared for Garrett’s attacks, but he was satisfied he was able to get the victory on a night when his mother got to watch him wrestle as an Illini for the first time.

Delgado’s mom wasn’t able to make it to the finals of the tournament last year because she had to care for Delgado’s two younger siblings back in California while his father made the trip. This year, however, both parents were able to make the trip down to Oklahoma City to see their oldest son atop the podium.

Delgado didn’t really think about his family when he was competing, but Heffernan believes having his family there added incentive.

“It was a big deal to have his mom there,” Heffernan said.  “There is a little extra pride when your parents are in the stands watching you, especially for the first time.”

Delgado’s parents haven’t been able to see their son wrestle frequently since he made the transition from Cal Poly to Illinois. Since coming to Illinois, Delgado quickly rose to the top of the Big Ten before making himself known on the national stage. But with all the success he has had, Delgado admits being in the spotlight is still something he is uneasy with.

Heffernan said he actually finds it refreshing that his superstar wrestler competes because he enjoys the sport rather than for the glory that it brings. Despite that, Heffernan is confident that next season Delgado will solidify himself as the best wrestler in Illinois history.

“He is a motivated kid and wants to succeed at the highest level,” Heffernan said. “Winning is one of those things you start enjoying, so I don’t think we will have to beg him to do this all again.”