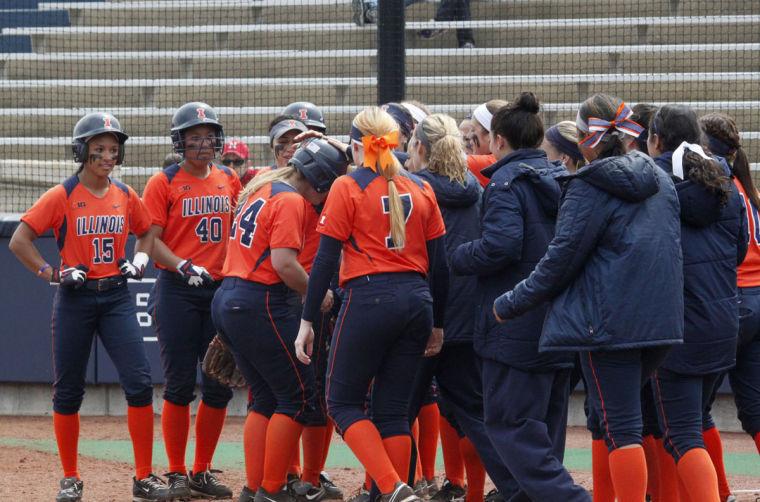 Jenna Mychko (24) is congratulated by her teammates after she hit a two-run home run during the softball game on Sunday, April 6. The Illini lost 12-3 in 5 innings.

Illinois softball catcher Jenna Mychko’s blond hair isn’t streaked with grey. She doesn’t have grandchildren. And yet her status as a senior has led to a nickname that defies her youth.

“We’ll always have little stupid inside jokes,” Mychko laughed. “And one is that they say I’m so old, so they call me ‘Grandma Jenna.’”

However, it is this status that has led Mychko to become one of the team’s leaders, both at the plate and behind it. One of two seniors on the team, Mychko has taken her experience and put them into practice to help the Illini pitching staff and perform offensively herself.

“There is not a player I’m more proud of at this point than Jenna Mychko because of how hard she has worked this year,” head coach Terri Sullivan said. “And in working with the pitchers, and really the entire team, she has come into her own as a leader. She’s always had that capability, but she works very hard both on her offense and defense. She’s improved on both. She has a great relationship and a lot of respect from all her team and certainly the pitchers, which is critical to a team’s success.”

Mychko earned the starting catcher position midway through her junior year. She then went on to start in 20 of the team’s last 23 games last season.

Though she has proved herself all season, Mychko once again demonstrated her experience and improvements this weekend, in a three-game series against Nebraska, when Illinois took only the first game Saturday.

Mychko had four hits and two RBIs in Saturday’s doubleheader. Her solo home run in the second inning of the second game put Illinois on the scoreboard in a game. She then went 2-for-2 on Sunday with a two-run homer in the fourth that once again put Illinois’ first runs on the board.

And although Mychko came out this weekend offensively sound, her work behind the plate is to be noted as well. The ties she forms with the pitchers play a key role in the team’s progress.

Mychko knows all three of her pitchers and their different personalities well. It’s this knowledge that helps compose pitchers in tough situations, keeping the game in perspective and demonstrating a maturity that is necessary at this point in the season, Sullivan said.

Whether it’s cracking down by saying, ‘Hey, focus,’ or using a joke completely irrelevant to softball, Mychko knows what to do to calm her pitchers.

“She’s been really good with handling us differently because all three of us pitchers are different,” junior Shelese Arnold said. “She knows how to talk to us, calm us down and get us going. Me, I’m the more serious type — so Jenna, she is kind of like, ‘Let’s go, let’s go Shey.”’

Her four years of experience also plays a role in helping the freshman pitchers with strategy.

“She’s been around the game, and a lot of these other players that we’re playing against, for a long time,” freshman pitcher Jade Vecvanags said. “So she knows their strengths and weaknesses and how to work with them and work against them.”

It’s these relationships with the younger pitchers that Mychko has come to value over the course of both the season and her entire Illinois career.

It’s the time spent not only on the field but also grabbing food, watching movies like “Space Jam” or trekking out to Walmart that have aided Mychko in forming bonds with her younger teammates and establishing herself as “Grandma Jenna.”

“It’s a lot of fun to see them progress,” Mychko said of freshman pitchers Vecvanags and Brandi Needham. “They’ve made tremendous leaps and bounds as far as success in pitching, from the fall until now, or just from beginning of the season till now. They’re willing to take the ball no matter what the situation is or who we’re playing or what the score is. They’re ready to just go in there and pitch. They really take the team on their back and carry us.”

Though Mychko will soon have to swap her Illinois softball uniform in favor of a graduation gown, the senior is nonetheless excited to watch her teammates build on their experience in the future.

“I think they’re going to take this program to the next level,” Mychko said. “And it’ll be fun to watch them progress even more.”