Illini falter in doubleheader with Northwestern 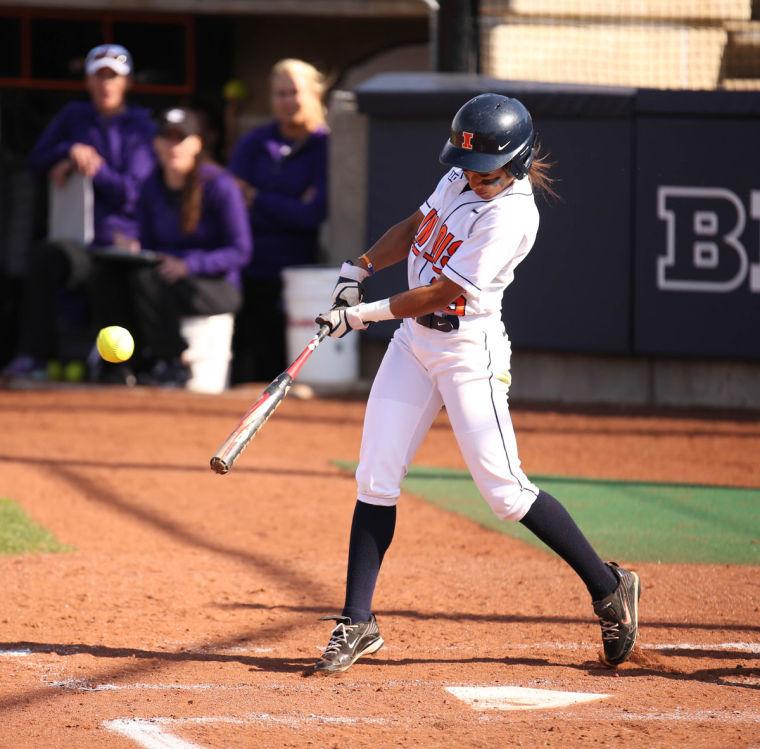 Illinois' Alex Booker hits the ball during the game against Northwestern on Tuesday, April 22, 2014. The Illini lost 6-3 in the first game of the doubleheader.

A home run and an RBI double weren’t enough for the Illinois softball team to eke out a win in the first game of its home doubleheader on Tuesday against No. 25 Northwestern. The second game wasn’t any better as the Illini failed to put any runs on the scoreboard.

“We’ll definitely figure out what adjustments we need to make in the circle, at the plate and defensively,” first baseman Remeny Perez said. “The main thing offensively is we’ve got to hit. Regardless of if the opponent scores one run or 10 runs, we have to hit. We need to work on seeing pitches in and then hitting them out.”

Fresh off an away series at Purdue, the Illini were looking to keep the wins coming. They had lost eight straight games before winning Sunday’s series finale.

The Illini failed to answer until the fourth, and left seven runners on base throughout the game. They had only three runs on eight hits, compared to Northwestern’s six runs on seven hits.

Northwestern has used hot starts to its advantage throughout the entire season, outscoring opponents 129-43  in the first three innings of games, coming into Tuesday.

The Wildcats outscored the Illini 6-0 in those first three innings in the first game.

Illinois finally put two on the scoreboard in the bottom of the fourth with a two-run home run from Perez. The Illini scored their third and final run off a Ruby Rivera double.

Brandi Needham started on the mound for Illinois, giving up seven hits and earned four runs but was replaced in the fourth by Jade Vecvanags. She pitched the remainder of the game and went on to retire 12 straight batters. But the Illini offense failed to aid its pitchers.

“I really like how we fought to the end,” head coach Terri Sullivan said. “We really believed with one swing of the bat we could change things. We just didn’t get it clicking until later in that first game. However, I was very excited with the relief pitching of Jade. It shows that at this time of the year, you can still give your best performance, and we need that from her.”

Northwestern started the second game similar to the first, taking the lead early and shutting down Illinois’ offense with a 9-0 mercy-rule win.

While the offense failed to execute, the defense wasn’t much better, making three fielding errors in the fifth and sixth innings. Northwestern scored a combined seven runs in those innings and took the game away.

Illinois went through all of its pitchers during the second game. Vecvanags came back, but struggled to repeat her performance from the first game.

“I just really went out there focusing on pitch by pitch concentration and relaxing,” Vecvanags said. “I went into the second game the same way I went into the first game. There were some hits I gave up at bad times, but you’ve just got to keep working and just got to stay relaxed out there.”

After Tuesday’s two games, Northwestern leads the all-time series with Illinois 21-11. The Illini have lost their last eight games to the Wildcats.

Heading into their last home series this weekend against Michigan, the Illini have dropped their past five home games.