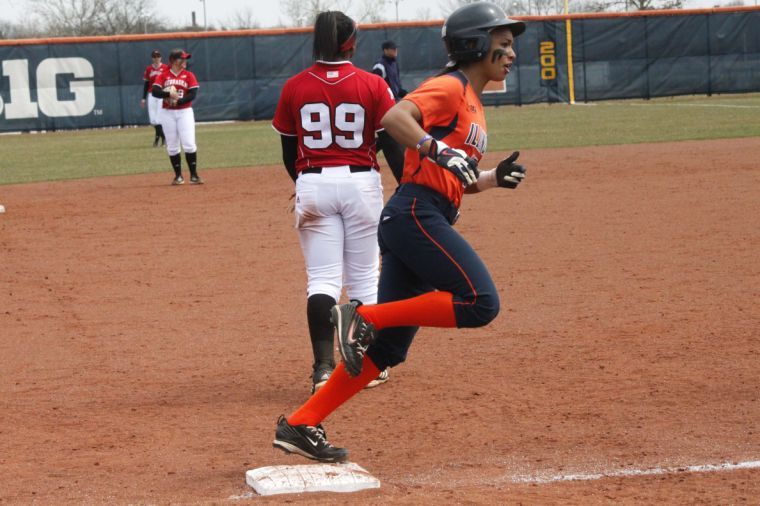 Illinois' Alex Booker (15) rounds third base after Jenna Mychko (not pictured) hits a home run during the game against Nebraska on April 6. The Illini lost 12-3 in five innings.

For the Illinois softball team, its mercy rule win over No. 4 Michigan a little more than two weeks ago was a highlight of the season. To both coaches and players, it represented all the possibility Illinois had from the beginning and the will it carried to the end.

After getting off to the best start in program history, Illinois (24-26, Big Ten 7-16) repeatedly struggled to put it all together and follow its opening weeks.

But the Michigan victory and even the two losses that followed were a statement to say Illinois wasn’t done fighting. For the Illini beat the Wolverines by more runs than any other team and came close to taking the series in the second loss.

“I’ll remember a lot about the season,” sophomore infielder Allie Bauch said. “But Michigan is just something that sticks out because it was such an amazing and special experience. It’s something I’ll always remember because no one else had really done that this season against them. So it’s cool and it set us apart. I’m glad we had that weekend against them and we played like we did.”

The momentum from that weekend propelled the Illini to get its first sweep of conference play against Penn State and then its first Big Ten Tournament victory since 2004, before losing in the quarterfinals in a rematch with Michigan that ended Illinois’ season.

But the road to that Michigan series was a season paved with the disappointment from many one-run and extra-inning losses that led to a ninth-place finish in conference play.

Illinois played eight nationally ranked opponents throughout the season and came away with only three wins in 17 games against these teams.

With a focus on pitch-by-pitch concentration, the Illini were determined to not underestimate the power of one play.

“When it’s been there, I think we were winning innings and winning games,” head coach Terri Sullivan said. “That’s easier said than done because our game is such a mental game, with play stopping after every pitch. But it’s key to trust your preparation and really be strong and confident mentally. It’s not easy when you’ve had some tough losses, so obviously we didn’t think we had pitch-by-pitch concentration there. But I think our team has gotten stronger and they know how key that is.”

With freshmen pitchers such as Brandi Needham, who had a 2.86 ERA and finished 17-15, the defense received a boost.

But it also received plenty of offensive support from senior Alex Booker who recorded the team’s first ever cycle and batted a personal season-high .371.

It was in moments where the pitching, fielding and hitting came together for consistency that demonstrated the team’s ability. And the Illini carried all of this to the field in its final games of the season.

“You can definitely tell we’ve made a lot of big strides from where we started to where we are right now,” senior catcher Jenna Mychko said. “We finally brought it all together.”