Illinois looks to start season with a win 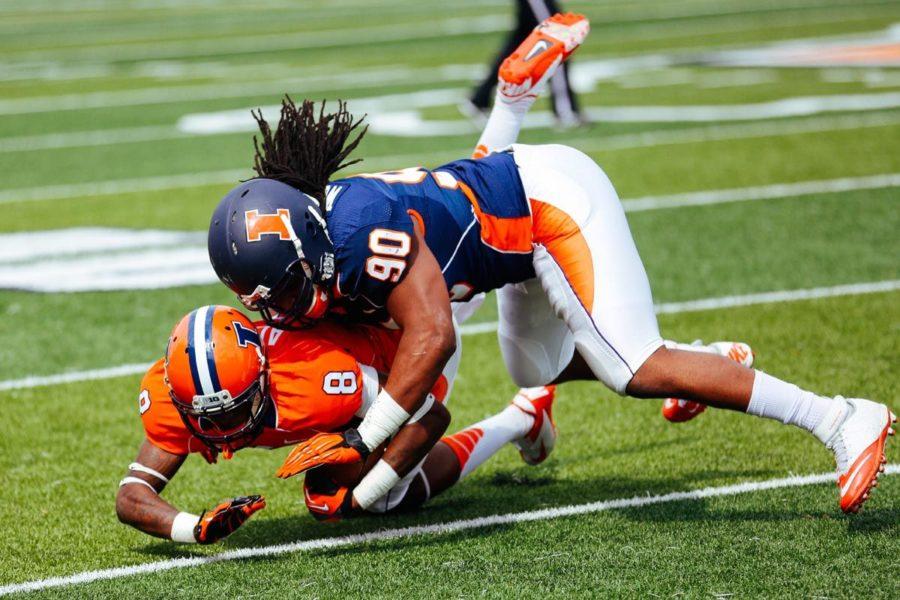 Junior linebacker Mason Monheim will be in front of the home crowd and have the band roaring in his ears on critical plays when he hits the field once again this Saturday. The memory of Illinois’ loss to Northwestern is still fresh in his mind and the feeling of walking out of Memorial Stadium has become a catalyst to improve his play and his team’s.

So when Illinois opens its 125th year of football with its first ever meeting against No. 21 FCS ranked Youngstown State, it’s looking for a chance to demonstrate that this is a changed team.

The Illini are seeking to redeem themselves this season after a disappointing 2013 campaign (4-8, 1-7 Big Ten), and hoping to continue its 13-0 all-time streak against FCS opponents.

“I think we have to prove ourselves, too,” head coach Tim Beckman said. “There’s no question about that. I’ve been on that sideline with Toledo and with some FCS teams that I coached for. You go play a school like this and you want to showcase that you’re good enough to play with them. The only thing we’ve got to worry about is ourselves.”

Looking to continue on last year’s improvement, the Illini offense will be under the leadership of second-year offensive coordinator Bill Cubit and the recently named starting quarterback, Wes Lunt, who will make his first start as an Illini this weekend.

Starting with its performance Saturday, the large focus will be on the defense, which struggled and finished 110th in total yards in the country last year.

Youngstown State will have a strong running back in tailback Martin Ruiz, who had 192 carries for 1,094 yards and 15 touchdowns. Like the Illini, the Penguins (8-4, 5-3 Missouri Valley) will bring in a new starting quarterback in junior Dante Nania, who backed up a four year starter and was 11-for-20 passing for 180 yards last season.

“You assume their playbook might not be as vast as they would be if they had a veteran guy in there,” defensive coordinator Tim Banks said. “But at the same time, we understand that because of his skillset that we saw last year, he’s extremely athletic. He’s played in some big games for them. I don’t know if it’s just like playing a guy who’s never taken a snap. We’re looking at this as if he’s a returning starter and understanding that he’s a good enough athlete to make some guys miss. We anticipate those guys using him in the run game as well.”

To cover the Penguins spread offense, both Banks and Monheim agreed the key will be filling the gaps to avoid getting beat by the run.

Saturday’s game will also bring familiar faces to Champaign with three Youngstown State coaches having experience at Illinois. More prominent will be the presence of Jim Tressel, the Youngstown State president.

Beckman, to this day, still keeps in touch with Tressel and said he is looking forward to seeing his friend this weekend.

For the players, this weekend is the first chance to prove that this year will be different. It’s an opportunity to preserve a home-opening streak and convince fans that this is a transformed team.

“The way we finished the last two seasons is not where we want to be,” Monheim said. “We have a standard set and it’s high. And it’s a championship level. We know to get there we need to a championship effort. So we need to work at that every day and each day at a time, getting better. We’re hoping great things will happen this year.”