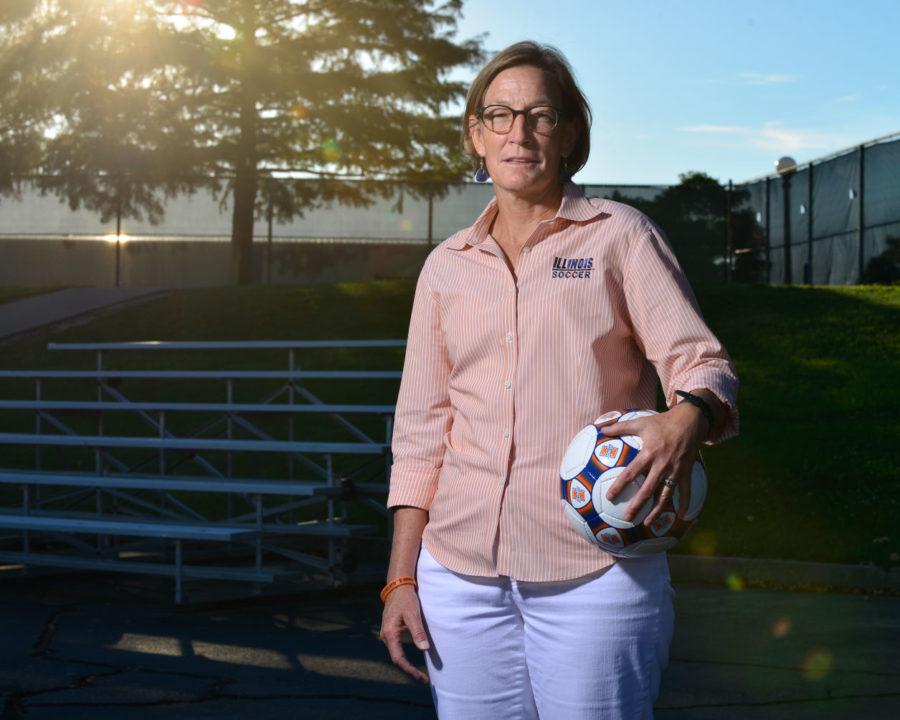 Editor’s note: The Daily Illini sports desk sits down Sunday nights and decides which Illinois athlete or coach is our Illini of the Week. Athletes and coaches are evaluated by individual performance and contribution to team success.

In 1982, Janet Rayfield hung up her cleats after four seasons of soccer at North Carolina, leaving behind Anson Dorrance, a young and eager coach with an uncompromising agenda. UNC wasn’t the soccer powerhouse that it is today; one that has nurtured international soccer icons like Mia Hamm, Kristine Lily and Shannon Higgins, and set a benchmark for women’s soccer. Or the one that’s taken home 21 out of 31 NCAA women’s soccer championships. Instead, it was a program in its infancy with Rayfield — an integral part of its early success.

She captained the Tar Heels to the inaugural NCAA women’s soccer championship in 1982 and scored 93 goals during her four-year career at UNC. Rayfield was part of the preamble of a now storied program and a soccer movement that has shaped modern soccer. Her professional career in soccer has hardly slowed down since then.

Rayfield has since achieved a monumental milestone, attaining her 200th career win against Charleston on Friday. Now she’s the most decorated coach in Illinois soccer history.

Under her management, Illinois has enjoyed 11 consecutive years as a top-25 program in the country. Rayfield has essentially set every record attainable since arriving at Illinois in 2002, including most overall victories, conference victories, single-season victories and NCAA Tournament appearances. She is also the only woman to receive a National Soccer Coaches Association of America Honor Award, recognizing her contribution to the game of soccer. It’s a list that includes her former coach and mentor, Dorrance.

Rayfield grew up in Dallas, which was the soccer hotbed of the country. Back then, the U.S. was still skeptical about embracing the sport of soccer at a time when the term “soccer-mom” didn’t exist and interest in the game was being sculpted by a generation. Dallas is the place where Dorrance discovered Rayfield. While recruiting in Texas, he heard of a great tactician and prodigious goal scorer and recruited Rayfield in 1979 as she helped build the program from the ground up.

“We brought her onto campus, and honestly, she was a better player and human being than I ever could’ve imagined,” said Dorrance, who still coaches the Tar Heels. “She came in and set a standard for my players in training. Basically, it’s a standard the University of North Carolina women’s soccer program lives by, and I attributed a lot of our early success to the very high standard that Janet set for her teammates.”

Directly out of college, Rayfield returned to Dallas in 1983 and chose to pursue a career as a software engineer at a time where opportunities to play in professional leagues were few and far between. She kept soccer as a passion. She coached the local club team Texas Spirit Soccer Club before she decided to leave her job as a software engineer to become an assistant under Marcia McDermott at Arkansas.

“I think what really made me change is that the ultimate best job you could have is the one that you’re passionate about, and I decided that it was worth the risk to turn my passion into my profession, and I haven’t left since,” Rayfield said.

It wasn’t always an easy road. There were times early on in her career when 200 wins seemed improbable for her. After serving as McDermott’s assistant at Arkansas from 1990-93, she took her first head coaching job with the Razorbacks in 1993, and from then on, the real learning process began.

“There have been seasons at Arkansas, and even a couple of the seasons here at Illinois, that you’re not even sure that next win is ever coming, much less that you’ll get to 200,” she said. “When I was a young coach, it was hard (when you didn’t) get to a double digit (win) season. You just felt like you were a failure and now, you realize that that’s not really a failure. The lessons learned through those seasons are as invaluable as the ones you learn during the 20 win seasons.”

Rayfield has hardly looked back since. She has been a key figure behind-the-scenes in making sure the U.S. Women’s National team is one of the best in the world, serving as a scout, technical advisor and youth team coach assistant, and was Steve Swanson’s assistant for the U-20 soccer team’s 2012 World Cup run that saw them reclaim the title from Germany.

“It’s a different experience working with the best players in the world, and you’re in a situation where there’s one event, the time crunch is different. The pressures are different,” Rayfield said.

Being the competitor Rayfield is, she hardly looks back at the wins. Instead, it’s the defeats that nag at her and the small, scattered moments of in-game magic that are engraved in her memory.

“I probably remember moments more than I remember games or victories,” she said. “I think as coaches, the longer my career has lasted, the less I’ve counted anything.”

Much of who Rayfield is as a coach is influenced by her father, who was the main reason she got involved in the sport in the first place.

“My father got involved and certainly he’s a big part of who I am and the way that I coach and the way that I see myself as a human being,” Rayfield said. “For me, it was athletics. For my sister, it was music. But all of us had an ingrained idea that if you were going to do anything, do it to the best of your abilities and my father was the example of that.”

In retrospect, Rayfield is grateful for all the sport has given her.

“(Soccer) has given me lifelong friendships,” Rayfield said. “It’s given me wonderful young people to mentor and that have taught me lessons … the quantity of quality people is just endless, and all of those people have made a difference in every single one of those wins and more importantly in my life.”

Eliseo can be reached [email protected]