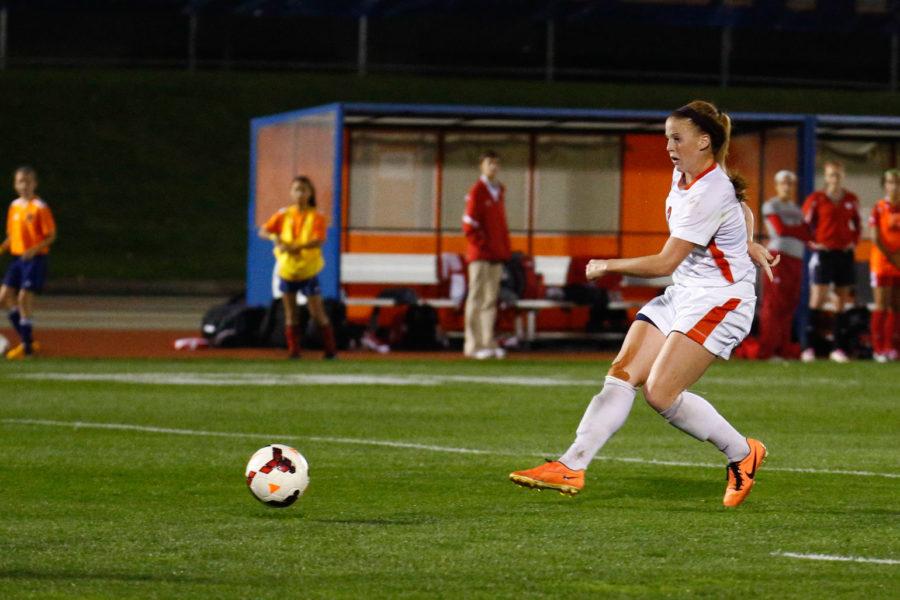 Illinois’ Janelle Flaws scored all five Illini goals on the weekend in a pair of victories over Purdue and Indiana. The senior striker has now scored a Big Ten-leading 11 goals in 10 games so far this season.

Illinois soccer continues its winning ways as standout senior striker Janelle Flaws netted all of the team’s five goals during this weekend’s wins against Indiana and Purdue to improve the No. 22 ranked Illini to 8-2, 3-1 in Big Ten play.

Thursday’s 2-0 win against Indiana and Sunday’s 3-0 win against Purdue marked the team’s fifth and sixth shutout wins of the season. Flaws scored on a free kick in each half against Indiana, securing Illinois its second straight Big Ten win while her hat trick on Sunday made it three.

“Every shutout we get feels good,” head coach Janet Rayfield said after Thursday’s game. “We wanted to make it a better defensive season compared to last year, and five shutouts shows we have really made a difference.

“Janelle took advantage of both her opportunities on set pieces and Claire (Wheatley) made a big save on a penalty kick that didn’t allow Indiana to get back in it.”

Against Indiana, Flaws scored off a free kick from 20 yards out in the 20th minute, sinking it in the bottom right corner of the net to open the scoring. She would go on to curl the second goal around the defensive wall on another free kick, leaving the Purdue keeper helpless. The win included a crucial save by the sophomore keeper Wheatley, who stopped a penalty kick in the 59th minute just minutes after Flaws’ second goal.

“I worked on some extra free kicks this week with coach Jeff Freeman and it ended up paying off,” Flaws said. “It was nice to get another Big Ten win, but I don’t think it was our best performance of the year.

“We just need to fix what we did wrong to come out better on Sunday.”

Flaws didn’t let up her scoring ways against Purdue as Illinois had to count on three late goals by the standout forward to seal the win.

Illinois was shut out for the good part of 80 minutes before Flaws broke the stalemate with 10 minutes remaining.

Off a lead pass by sophomore defender Hope D’Addario, Flaws cooly slipped the ball past Purdue keeper Erika Yohn, who had six saves on the evening.

Flaws would go on to score a penalty eight minutes later after a hard foul on sophomore utility striker Alia Abu-Douleh, who was filling in for the injured Kara Marbury.

Flaws capped off the scoring a minute later in the 89th minute off a howler by Purdue’s keeper Yohn, who misjudged Wheatley’s goal kick, as Flaws pounced and out fought Yohn to put the ball in the back of the net. Flaws now tops the Big Ten scoring charts with 11 goals in 10 games and is now only six goals away from tying Vanessa DiBernardo’s mark of 43 goals. DiBernardo ranks third in Illinois history in goals scored.

Illinois has limited its opponents to 33 shots in the last seven games, marking the fewest shots allowed in a seven-game span in school history.

“I think Janelle had a couple chances early in the game that she’d like to have back again and finish those but the thing about a goalscorer is that they just keep at it, they just keep going,” Rayfield said. “They know that the next opportunity they may get might be the one that they score. You like that mentality in a goal-scorer.”

Illinois faces Ohio State and Purdue this upcoming weekend as they continue their Big Ten stretch of games.

Eliseo can be reached at [email protected]ini.com.