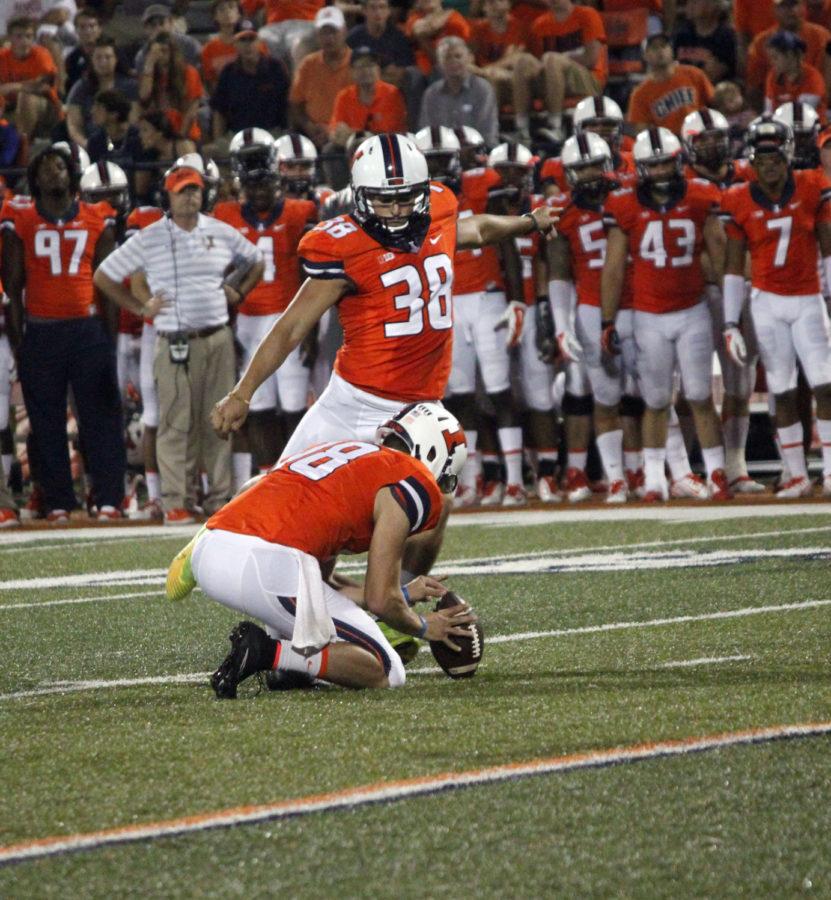 Illinois' David Reisner kicks the ball during the game against Texas State at Memorial Stadium on Saturday, Sept. 20, 2014. Illinois won 42-35.

The shoes were waiting for him. Just one pair in a box. Size 10 ½ and $99 — a discount because they’d been returned.

David Reisner didn’t even get the box to take home.

But it was this pair of neon green Magista high-top cleats with the red Nike swoosh that would blur through the air for the first time against Texas State Saturday on the feet of Illinois’ kicker.

He heard about the shoes before from emails proclaiming them the next best soccer cleat since they’d been worn in the World Cup. So when Reisner found them at a Nike Factory Store in a Tuscola, Ill. outlet mall with his roommates, it was too good a deal to pass up.

“There was no way I wasn’t getting these,” Reisner said of his discovery.

And the purchase paid off.

Reisner, a sophomore transfer from Navy, was called to kick late in the second quarter after starter Taylor Zalewski missed a point-after attempt to brake Illinois’ 64-game continuous streak of made PATs.

After making the PAT, Reisner kicked off for a touchback and head coach Tim Beckman decided to stick with Reisner for the remainder of the game.

“Kicking off into the wind and warm-ups, it was kind of discouraging. I was still hitting good balls, but the wind was gusting. And then I kicked a touchback, I felt like I was on a mountain — I felt really confident ever since that.”

Reisner didn’t start the game in his neon green high-tops, but after playing  his first game in three years, he decided he’d switch cleats during the half.

The equipment manager was confused, but Reisner went ahead with the more comfortable neon pair. He would go on to make two more PATS, nail a field goal and kick off six times.

It’s a change of pace for an athlete who joined the team as a walk-on and just last year was watching games from the stands.

Since his arrival on campus, the Bartlett, Ill. native has been working for a chance to play. According to Beckman, the competition for starting kicker often comes down to the last field goal in practice.

But it’s an opportunity that won’t change the relationship between Reisner and Zalewski, who are roommates.

Special teams coach Tim Salem sees this all the time.

“There’s a number of players on our team that are great people that have bonds, great character, helping each other in practice, making each other better,” Salem said. “I mean, that’s not changing. You’re talking about kids that are worthy people and that’s kind of the joy to be around them because they care so much about one another and helping each other.”

Beckman said Reisner is No. 1 for now, but practice will remain a competition at the kicker position. For the team, it’s a matter of consistency, and on Saturday, Reisner displayed that capacity. He’s expected to be the starter against Nebraska this week.

As for the fate of the standout shoes?

“We’ll let him wear those yellow ones, as long as he kicks the ball through the uprights,” Beckman said with a laugh.