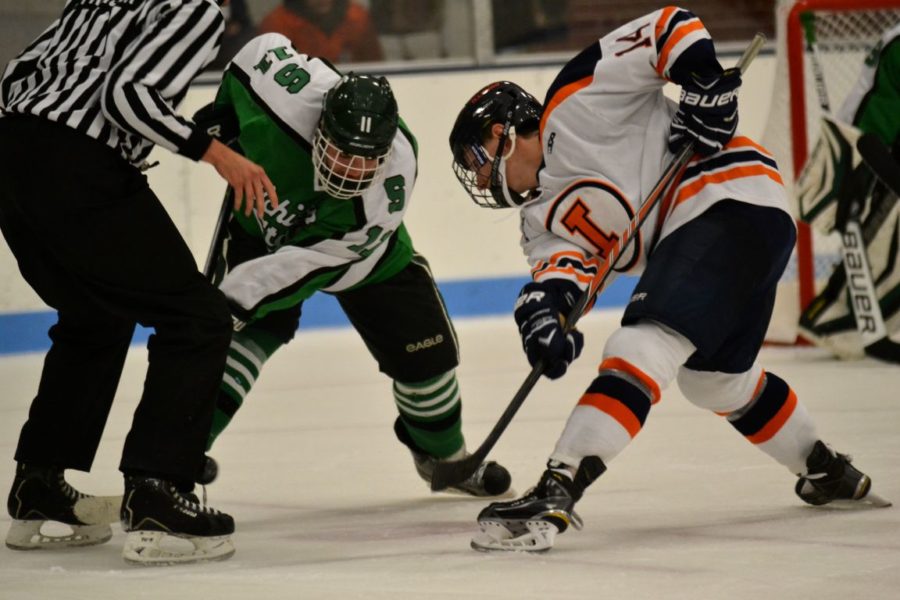 Players await the drop of the puck during a face-off Friday against Michigan State. The Illini won both games against the Spartans.

With little over a minute gone into the first period, left wing Jack Soneson ushered in the Illini’s first goal back at the Illinois Ice Arena. It was far from their last.

Illinois remains undefeated this season (5-0-0-0) with a sweep of Division II opponent Michigan State in its first home series of the season. The team won two relatively close games on Friday and Saturday by scores of 5-4 (SO) and 4-2, respectively.

In the first game, Soneson’s quick goal was the first of four unanswered goals for the Illini that all came in the first period.

“It was so early in the game,” Soneson said of his goal. “It got us off to a great start in that whole period. We had great momentum after that. We were on fire.”

A fight in the Michigan State goal led to three disqualifications for the Illini and a five minute roughing penalty. Junior defenseman Aaron Dusek was called for a hooking penalty shortly after, which resulted in a 5-3 Michigan State advantage. The Spartans took advantage of the opportunity and put their first goal on the board.

After its first goal, Michigan State gained the momentum and went on to tie the game with four unanswered goals of their own, one of which came while the Spartans were shorthanded. The Illini had 51 penalty minutes over the course of the second and third periods.

“I can’t even think of a word to describe how unacceptable the amount of penalties we took in the second and third period is,” head coach Nick Fabbrini said after the first game. “This is something we’ve talked about. I thought we had gotten past it, but obviously, it is still a bit of an issue for us.”

The game eventually went into a shootout and Soneson ended it the same way he started it: with a goal.

“After watching the rest of the team go, it looked like the goalie was giving the sides a little bit of an opening,” Soneson said. “As I was going down, he just left his whole right side open, and I just took the shot and it went right in.”

While Fabbrini was happy to see the team get the 5-4 win, he was disappointed with the team’s play in the second and third period despite calling the first period the best hockey he had seen from the team all season.

Fabbrini’s thoughts on the second game were almost the opposite of the first. He criticized the team for its slow play in the first period, but gave the players credit for the way they bounced back in the final two periods.

The Spartans jumped out to an early 1-0 lead, but defenseman Andrew Wicklin tied the game up for the Illini two minutes later and the score remained even after one period.

“We just didn’t have a whole lot of energy,” Fabbrini said about the first period. “There wasn’t much energy both on the ice and on the bench. We were making the game really hard on ourselves. We turned the puck over 15 or 16 times in the period, which is really a number we shoot for in the entire the game.”

In the second period, Illinois got a go-ahead goal from center Josh Belmont, and the team held onto the lead for the rest of the game, sealing the victory on a late insurance goal in the third period from forward Yoshi Shibata.

Shibata was the only member of the team to score in both games this weekend but he still thought he and the team will need to play much better in the future, especially when it takes on Division I teams. Although, he did like the way the team cut down on the penalties in the second victory over the Spartans.

“Coach made it clear that if we keep doing stupid stuff that hurts our teammates, then they aren’t going to play as hard,” Shibata said. “I agree with that. I know everyone cares about this team. They were more disciplined in this game.”

The Illini will travel to Chicago to take on Colorado State University next weekend, and Fabbrini doesn’t plan to take the second-year Division I program lightly.