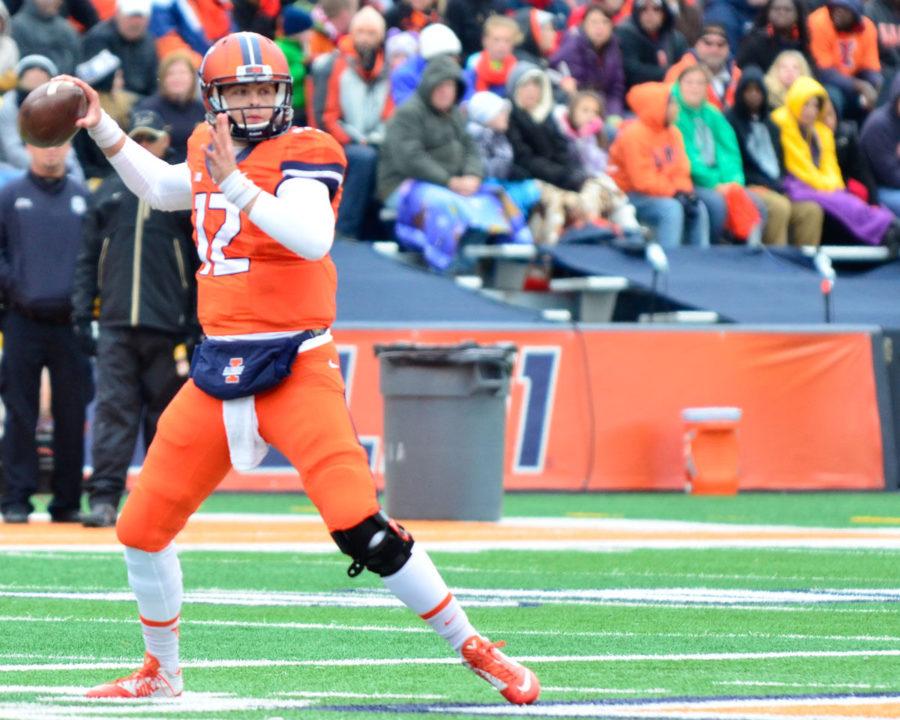 Illinois' Wes Lunt (12) attempts to pass the ball during the game against Purdue at Memorial Stadium on Saturday, Oct. 4, 2014. The Illini lost 38-27.

Quarterback Wes Lunt walked into the post-game press conference close to the end. Rather than wearing his uniform like most of the other available players, Lunt wore a t-shirt and shorts.  He was barefoot with his socks in hand as he took a spot in the front of the room.

And the frustration was evident after Illinois’ 38-27 loss to Purdue.

While it was a fourth quarter sack that finally took him out of the game, Lunt’s said his injury, a contusion on his calf, had been bothering him the entirety. He was noticeably limping in the third quarter but kept playing until that sack finally called coaches to replace him with Reilly O’Toole.

Lunt went 27-for-39 with 332 yards and two touchdowns before being called out. But he wanted to keep going.

Purdue broke a nine-game Big Ten losing streak with the win in a game where Illinois finished with 515 total yards of offense but failed to capitalize on plays.

In the third quarter, Josh Ferguson fumbled on a lateral pass in the red zone which was recovered by Purdue.

Kicker David Reisner missed a PAT in the third quarter and had a blocked field goal in the fourth.

But one positive of the game that both coaches and Lunt praised was freshman wide receiver Mike Dudek, who had 200 yards on eight receptions. He had three plays over 30 yards and is only the fourth player in Illini history to post a 200-yard game.

“The kid came up in big situations,” Lunt said. “Getting open and making great catches in crucial situations. He’s a true freshman, he doesn’t play like one. He’s had a heck of a season so far.”

But Dudek was quick to dismiss claims that he is considered the go-to receiver.

“I feel like it’s a team game,” Dudek said. “I got my number called a lot today and I tried to go out there and make as many catches as I could. The line did a good job and Reilly and Wes threw good balls.”

Lunt hopes to be back next Saturday when the Illini take on Wisconsin. But he said he was to have an X-Ray and go from there in getting treatment.

For both Lunt and Dudek, the disappointing results were clear in their post-game appearances.

And while media suggested expectations to win played a role, Dudek stated that those in the end didn’t matter.

“When you’re expected to win, you want to go out and win,” Dudek said. “So it might have, but we got to out and win. Point blank. And we didn’t today.”

Charlotte can be reached at [email protected]i.com and on Twitter @charlottecrrll.