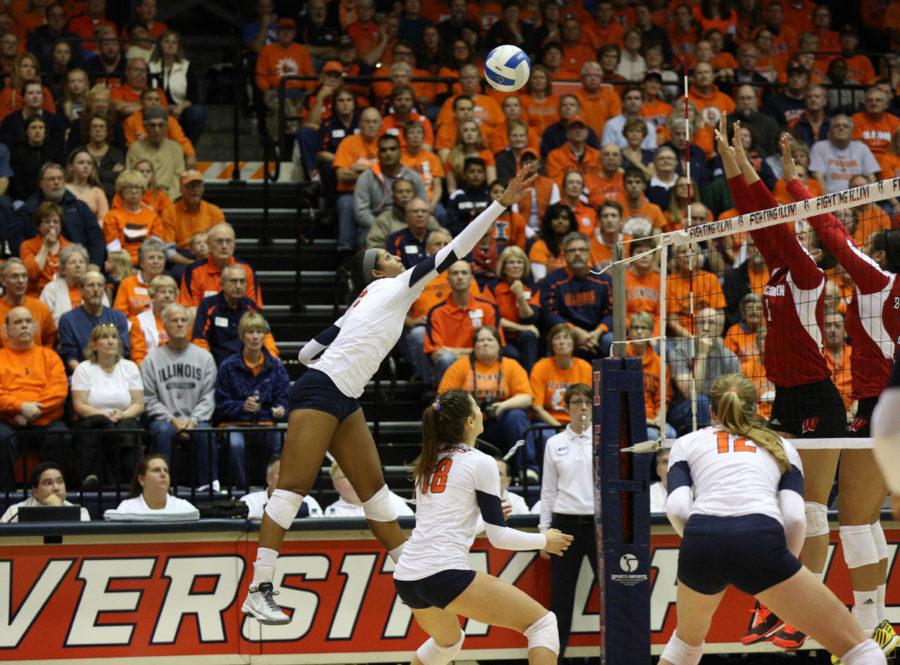 Illinois’ Morganne Criswell tips the ball over the net during the game against Wisconsin on Saturday.

While Jocelynn Birks and Liz McMahon both rank in the top 12 of the Big Ten kills per set list, Morganne Criswell might be the Illini’s most important hitter.

Criswell is third on the team in kills and second among the Illini’s top four hitters in hitting percentage — even higher than the preseason All-Big Ten selection Birks.

The senior outside hitter has been inconsistent at times this season. Her individual hitting percentage varies from minus .100 to .636 in matches so far this season.

Saturday’s match against No. 6 Wisconsin was no different. Criswell recorded just one kill and two errors in the first two sets before getting benched for a rotation. The senior responded in the final two sets with five kills to only one error.

“I thought she was up and down,” head coach Kevin Hambly said of her play against the Badgers. “I thought there were times that she was good and times where she a little disengaged.”

This season, Hambly hasn’t been afraid to pull Criswell out in favor of sophomores Katie Roustio or Michelle Strizak. Against Wisconsin, Strizak saw the floor briefly in the second set before Hambly went back to Criswell to finish the match.

“We need Morganne or one of those outsides to create something,” Hambly said. “I think Morganne is pretty good about bouncing back. She doesn’t carry anything over match-to-match, whether it’s good or bad.”

Entering Saturday’s match against Wisconsin, Hambly and his staff were prepared for defending the “slide” play to middles.

The slide is a quick set to middles, who are running parallel to the net and jump off one foot on the attack. The goal is to use the pace of the play to find a gap in the block in between the outside hitter and middle blocker.

In the first two sets against Wisconsin, middle blocker Dominique Thompson had 11 kills on 14 attempts with just one error. She did a lot of her damage from the slide, however, and the Illini were able to shut her down in the final two sets.

In the next two sets, Thompson was held to three kills on 18 attempts with five errors, a minus .111 percentage. Hambly admitted the team did make adjustments on her, but wouldn’t mention specifics.

“I think, defensively, it took us a while to get into it,” Hambly said. “I made some adjustments on Thompson and we started to get some good deflections on her. It’s not just about the stuffs, it’s about deflections for us so we can get some transition balls.”

In losses earlier this season to Stanford and Virginia Tech, opposing middles have been able to gash the Illini defense. Stanford’s Inky Ajanaku recorded 16 kills and hit .500, while Virginia Tech’s Kathryn Caine hit .562 and recorded 10 kills.

Donnelly named Co-Freshman of the Week

Libero Brandi Donnelly was named Big Ten Co-Freshman of the Week, along with Northwestern outside hitter Symone Abbot. This is the second time in three weeks the Illini libero has earned the award.

Donnelly posted a career-high 25 digs in a victory over No. 18 Minnesota on Wednesday. That number was the fourth-most all-time in a three-set match and the most since Sandy Scholtens recorded 30 digs against Purdue in 1988.

The freshman followed that performance with 19 more digs, to go with eight assists and two service aces in a four-set loss to Wisconsin on Saturday.